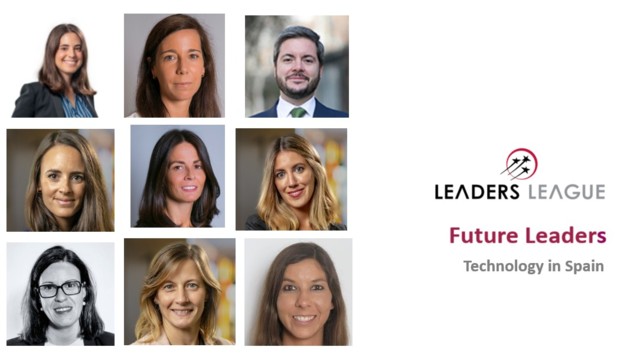 Who will be the future leaders in technology law in Spain? As part of its ongoing legal market research, Leaders League has identified those lawyers that, while not being the most senior practitioners at their firms at present, are expected to be at the forefront of the Spanish technology sector in the future. Given the constantly evolving nature of technology, technology lawyers face the challenge of constantly having to keep up to date with the latest innovations and their implications, as well as the new regulations that are being introduced to provide a framework for such innovations. The lawyers in our list are gaining the in-depth knowledge and experience that is putting them on the path to becoming members of the new wave of leading technology lawyers.

What are the criteria for making the Leaders League Future Leaders list? The lawyers included have met at least two, and frequently more than two, of the following criteria:

The lawyers that make the Leaders League Future Leaders: Technology in Spain list are as follows (in alphabetical order):

Track Record: In the last year, Irune Lamela was part of the team advising Repsol on the acquisition of Viesgo’s electricity business – this involved advice on IT and technology transactions, assignments and transfers, including the assignment of specialized hardware and software (including more than 30 software sector-specific applications and tools). In addition, she was also involved in advising Bankinter on the technology aspects of its acquisition of digital banking group EVO Banco. Irune Lamela was also part of the team that advised Telefónica on the technology aspects of the sale of its data centres business worldwide to Asterion for €550 million – this involved the preparation of technology-related contracts and service agreements for all the relevant jurisdictions.

Track record: Sainz De Vicuña Lapetra was recently involved in advising an organisation representing Spanish luxury brands on the impact of distribution rules in a digital environment as well as on how to protect intellectual property in digital marketplaces. She has been identified as a rising star by peers and senior lawyers in the sector and is recognised for her expertise in the areas of new technologies, e-commerce and data protection, as well as her work in the area of audio-visual communication law.

Background: Sainz De Vicuña Lapetra joined Gómez-Acebo & Pombo in 2008. In 2015, she was seconded to Nike, where she spent a period as associate legal counsel.

Track Record: Piñar Guzmán was recently part of a team advising an international technology company – which has operations in countries around the world – on a number of IT-related disputes, one of which involved a major international engineering company. He was also involved in advising a technology company in a case involving the imposition of multimillion-euro fines by regulators. He has also recently handled a number of disputes involving major Spanish banks.

Background: Piñar Guzmán joined Samaniego Law in 2017. He was previously a senior associate at Bird & Bird in Madrid, a firm where he spent more than eight years.

Track Record: Peinado has been part of teams advising Facebook on e-commerce and digital matters, including strategic advice on the launching of new initiatives and services in the Iberian market. In the last year, she was also involved in advising Facebook on new digital rights approved in Spain in December 2019. In addition, she was part of the team advising Xiaomi on telecoms, cyberlaw, privacy, commercial law and intellectual property issues related to its entry into the Spanish market.

Background: Senior associate Peinado joined Uría Menéndez in 2010. She is a lawyer in the firm’s litigation and arbitration practice and her expertise includes advising clients in the new technologies, and software sectors.

Track Record: Crespo Vitorique was recently part of the team advising a digital media start-up on all aspects of its development in Spain, including advice on the dissemination of content online. The advice included advice on social networks and data protection. In addition, she has also been involved in providing advice to Carrefour on e-commerce and data protection issues – these have included projects involving Carrefour’s relationship with its suppliers and consumers in the context of social media and mobile apps. This has resulted in a number of new mobile apps being launched. Recognised as a “rising star” by her peers, Crespo Vitorique also has an excellent reputation in the field of data protection and leads the firm’s practice in this area.

Background: Crespo Vitorique has been with Gómez-Acebo & Pombo for 13 years. Prior to that, she spant more than seven years at Cremades & Calvo-Sotelo. In 2006, she was seconded to the US firm Paul Hastings LLP, where she was based in Washington, DC.

Track Record: Soláns has been involved in providing advice to Microsoft on e-commerce, commercial IT contracts, new digital rights, and the privacy and security aspects of the implementation of artificial intelligence tools. She has also built a reputation for providing specialized regulatory, contractual and commercial advice to clients in the technology sector and start-ups in particular. Soláns also has extensive experience advising media industry clients.

Background: Soláns joined the firm in 2009. From 2013 to 2014, she developed her professional practice in the Peruvian law firm Payet, Rey, Cauvi. Prior to joining Uría Menéndez, she had spells at Gómez-Acebo & Pombo and Ramón y Cajal Abogados.

Track Record: González was recently part of the team advising BMW on the implementation of apps for users and car distributors and the review of all related IT agreements. She was also involved in advising Iberia Express on a review of its IT and apps, as well as advising ‘El Economista’ on its review of IT and platform provision agreements. González was also part of the team advising an international property investment company on the negotiation of several agreements related to software and apps,  and was also involved in providing advice to an international online retailer on the launch of services in Spain.

Background: González joined Ramón y Cajal Abogados in 2014. Prior to that, she was a lawyer at Urbetec for three years and, before that, a lawyer at Forbes-Sinclair. She also spent two years as a junior lawyer at Gil, Tejedor y Asociados.

Track Record: In the last year, Sanjuan was part of the team advising Santander Group on the negotiation of the master agreement between Santander Group and IBM for the provision, by IBM, of licensing, services, cloud and other IT-related services to affiliates of Santander worldwide – the agreement was valued at more than €700 million. She was also recently involved in advising Ferrovial on the creation, design and launch of several apps, innovative technology and IT-related services related to the e-mobility market. Sanjuan has also been part of a team advising on the implementation of innovative artificial intelligence technology in the real estate sector.

Background: Sanjuan joined the firm in 2017 from Vodafone where she was a senior counsel in charge of all issues related to industrial and intellectual property and audiovisual law. Between 2000 and 2008 she was a senior lawyer in the Madrid and Lisbon offices of Cuatrecasas specialising in information technology, intellectual and industrial property, and entertainment law.

Track Record: Bermejo has been part of the team providing regular advice on ecommerce, technology, cyberlaw, digital rights, data protection and privacy matters to WhatsApp’s Spanish, Irish and US businesses. This has included advice on the scope and applicability of new Spanish digital rights, as well as advice on investigations by Spanish authorities, such as consumer authorities and the Spanish data protection authority. She has also been involved in advising Microsoft on e-commerce, IT contracts, new digital rights, and the implementation of artificial intelligence tools, as well as advising Facebook on e-commerce and digital matters.

Background: Bermejo is based in the firm Uría Menéndez’s Madrid and Valencia offices. Prior to joining the firm in 2011, she was a lawyer at Equipo Marzo. Her practice focusses on e-commerce, technology and data protection.