Mélissa Simoni (Twitch): “Twitch has played a major role in legitimizing live-streaming as an entertainment form”

Known to the general public as YouTube for gamers, Twitch continues to power up with an ever-wider range of artistic and cultural content. The Amazon subsidiary has become the video-sharing service of choice for millennials and Gen-Zers. Its director of sales for France & the Benelux, Mélissa Simoni, talks about the purple platform’s pulling power. 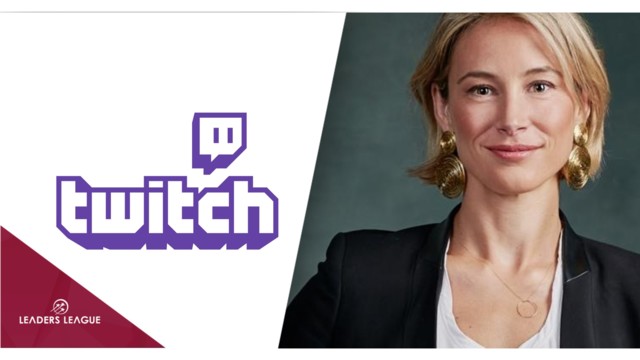 Leaders League: Created in 2011, Twitch was conceived as a digital content platform dedicated to video games. How has your company evolved over the past decade?
Mélissa Simoni: Twitch is the main live-streaming service for content creators on the internet. Ten years ago, the gaming community came together to support this service. Yet gamers have a host of other interests, therefore expanding the range of content on Twitch to include fashion, music, sport, and the arts was a natural step.

Globally, our service has an average of 31 million visits per day, which includes more than 2.5 million users at any one time. And while gaming content on Twitch has quadrupled in the past three years, we’ve seen exponential growth in sport and music content on the platform too. Certain high-profile members of the French media establishment, such as Arte, BFM, L’Équipe and Le Figaro, have made the switch to Twitch to launch channels.

These days, over 8 million content-creators stream on Twitch every month. In 2021, that translated to 1.3 trillion minutes of audience viewing time. We believe that these figures speak for themselves in demonstrating the success of Twitch’s original model, via which communities participate in generating content alongside the content creators themselves.

Although it features pre-recorded videos, Twitch made its name as a live-streaming platform, a format which has immense potential for interaction and monetization. What services can streamers on your platform avail of to build their user base?
In the space of 10 years, Twitch has not only developed more sophisticated streaming features, but has actually played a major role in legitimizing live streaming as an entertainment form. With Twitch, rather than a passive experience, we put the viewers at the heart of the action.

Via Twitch, brands can have success reaching the elusive Gen-Z market

From the moment they post their first video, we put a range of dynamic tools at the disposal of our streamers, such as Automod, one of our AI-based moderation systems, which polices the chat etc., freeing up content creators to do what they do best, safe in the knowledge that their community during a live stream is interacting in a respectful, good-natured manner.

Twitch has developed a micro payment system called Bits, which allows viewers to reward their favorite content creators in real-time. How does it work?
There are several ways users can support their favorite channels. They can take out monthly paid subscriptions or make micropayments by ‘cheering’ in the chat during streams, which sends an amount of Twitch’s own Bits virtual currency [1 Bit = 1 US cent] to the host of the stream. This is a virtuous model which encourages the production of quality content and builds bonds between the streamer and members of their community.

As for advertisements during streams, these give the opportunity for content creators to take a break during longer programmes. Members of the Twitch community have embraced these monetization features as a way to support their favorite content creators.

During the pandemic, views of videos and streams on platforms such as yours exploded, and there was a massive influx of new content creators. How did Twitch capitalize on this?
Twitch lets you create communities based on shared interests. During the height of the pandemic, when lockdowns and social distancing were the norm, we saw a significant increase in the number of hours watched and amount of content live-streamed and games played live on Twitch. We are proud to have been able to play a small role in bringing people together during this period.

Over 8 million content-creators stream on Twitch every month

From this peak of activity on Twitch, we have been able to retain a number of content creators who launched channels during Covid, many of them celebrities, like the tennis player Gaël Monfils whose channel became very popular thanks his interviews with sports stars such as Teddy Riner and Tony Parker. Then there was Gotaga, Doigby and Squeezes’ charity stream featuring Antoine Griezmann, which collected €33,000 for the Red Cross.

These days, more and more brands see the value of live streaming as a way to reach customers. What is your roadmap for corporate Twitch users?
Premium video, made-to-measure formats, carefully selected influencers… Twitch has an elaborate range of solutions that can satisfy the needs of brands, regardless of their industry. We decide on the most appropriate means of presentation in order to ensure that the brand can interact with the Twitch community in an authentic way.

For example, when we started working with Rowenta (SEB Group) to promote their products on Twitch, we launched a video to coincide with Prime Day, organized by our Brand Partnership Studio. We brought in the streamer Avamind, precisely because our experts know what Twitch content creators specialize in and that Avamind features SEB group products on her streams.

Over the course of her two-hour stream, Avalind unboxed Rowenta’s latest robot vacuum cleaner, explained its features and demonstrated how it worked. Her channel’s followers then had the chance to pose their questions, after which they were invited to suggest names for the device and pick the winner.

These types of exchanges are the way forward for brands that want to create communities of potential customers from Twitch regulars favorable to their brand. By interacting with communities and content creators on Twitch, brands can have success reaching the elusive Gen-Z market. Companies, from banks to fashion houses, have a lot to gain from using our interactive model where communities, content creators and brands come together to participate in a collective digital experience.