In 2020, the author and presenter Elizabeth Tchoungui was appointed executive director of corporate social responsibility, diversity and philanthropy at Orange. The US native spoke to Leaders League about the group’s efforts to promote inclusion in the digital sphere. 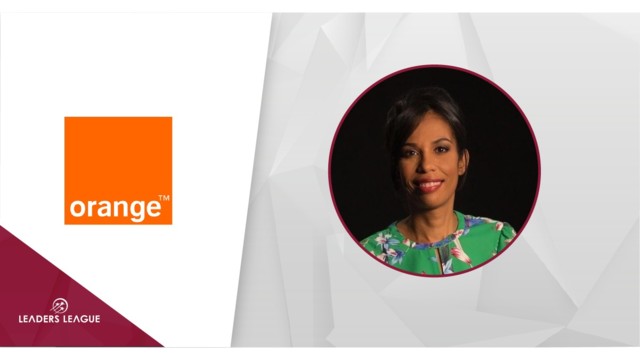 LEADERS LEAGUE. Digital equality is a cause Orange likes to champion. What is the company doing to help achieve it?

Elizabeth Tchoungui. The example of children falling behind in their education during the first lockdown provided a striking illustration of how the lack of basic digital devices can lead to social exclusion. Today, while 4 billion people on the planet still don’t have access to the internet, 3.3 billion of those live in areas where the internet is readily available, yet they don’t have the necessary equipment or knowledge to use it.

Via our “digital schools” Orange is trying to remedy this problem. These schools are primarily located in Africa, although there are a number in France too, and are run in partnership with local educational charities. Orange also offers products and services at a discounted rate for the socially disadvantaged in France and Spain, and a 4G-enabled phone for €25 in Africa.

The most urgent task remains helping more people become comfortable operating in the digital sphere. This is the main role of the Orange Digital Centers (ODCs).

What exactly is an Orange Digital Center?

Created in Tunisia, ODCs are spreading across the African continent, as well as in the Middle East and Europe. These centers work in close contact with the local authorities, charities and academic institutions in order to boost the employability of young people and encourage innovation. ODCs include a coding school, Solidarity FabLab – areas where people can develop concepts into working prototypes – startup accelerator and even an investment fund to finance the most promising projects. ODCs are a concrete manifestation of levelling up digital skills and promoting digital equality. Between now and 2025, we aim to open 32 new centers in Africa and Europe.

Orange Digital Centers are a concrete manifestation of levelling up digital skills and promoting digital equality.

How do you measure their impact?

The most satisfying thing when we open a new ODC is seeing how quickly it starts to have an impact. Take the ODC in Dakar, for example, which has barely been open for a year and yet has already created more than 1,000 direct and indirect jobs and generated value estimated at €12 million for the local economy.

To date in Tunisia, 16,000 young people have received digital training under this initiative, 1,800 have retrained and among the 800 apprentice coders that have passed through the ODC’s doors, 95% have found jobs either in Tunisia or abroad.

How do ODCs help women specifically?

Each ODC has a target of having 20% of attendees be female, a percentage we have surpassed in both Tunisia (40%) and Dakar (30%). And on the subject of digital equality, we take a twin-track approach, targeting both young people and women. Our efforts in this regard would seem to be paying off, as graduates of our data/AI course are 60% female.

Our HelloWomen program, launched in November 2020, helps both girls and women and is concerned with four main themes: awareness, sourcing, retraining and retention of females in technical and digital professions. In addition, our Women’s Digital Centers initiative educates women who have little or no experience of the digital world, proof, if any were needed, that digital tools aid literacy and facilitate job-training.

Do they also tap into an often-overlooked talent pool?

Precisely. Many people with high potential are discovered while attending an ODC, a lot of whom possess special skills which are highly prized by data-security and cybersecurity companies. In fact, the Israeli army has appreciated this fact as they employ people with Asperger’s syndrome in their engineering corp.

At Orange, we have launched our own action plan in order to convince people with more unconventional skillsets that their career can thrive at Orange and educated teams and managers about the role these individuals can play.

This initiative is one more reason why Orange enjoys an excellent reputation as a digital inclusion and diversity pioneer.