In 1971 an American sports-fan launched his own brand of sneakers. Nike was an overnight success and 50 years on, its owner Phil Knight is sitting on a €50 billion fortune. 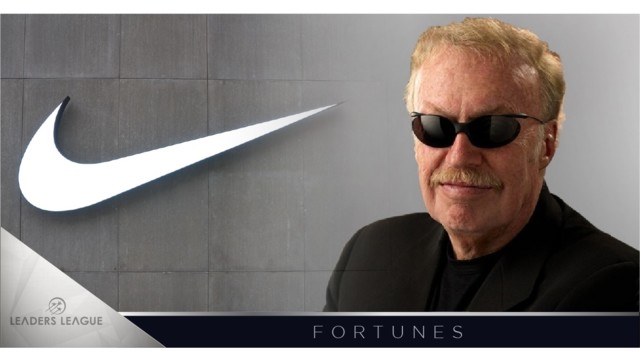 A simple comma, but you could pick it out among a thousand. In terms of brand recognition, the power of the Nike swoosh is unrivalled in the sports-apparel sector and is indelibly imprinted on the minds of consumers, something that only the logos of a handful of businesses in any industry, such as McDonald’s golden arches, can also boast. Sometimes the simplest ideas are the best, and Nike’s successful emblem cost just $35 dollars in graphic-design fees.

Combining entrepreneurial elan and an all-consuming passion for sports, Phil Knight founded his mythic corporate brand in 1971 after drawing inspiration from Greek mythology, specifically from the the wings of the Greek goddess of victory, Nike. He had gotten his break in the sneaker business a few years earlier a distributer of Japanese brand Asics.

The half-century history of Nike began in the bleachers of Autzen Stadium on the campus of the University of Oregon. Born in nearby Portland, Knight was one of the better track runners in the state. Following a brief apprenticeship selling Japanese brand Asics, he founded Nike in the hope of giving his fellow athletes better shoes to run in.

It’s difficult to imagine a world before Nike, but although Nikes were everywhere by the 80s and featured in some of that decade’s biggest movies, like Back to the Future and The Breakfast Club, the sneaker was still the new kid on the block.

Knight’s masterstroke came in 1984 when he convinced Michael Jordan to sign with his company, which subsequently released the Air Jordan line of Basketball shoes, to universal acclaim. Nike had hit the big time.

Running battle
In the 90s Nike began muscling in on the home turf of European rivals Adidas, snapping up clubs like Barcelona, who have been with Nike since 1998, and Arsenal. On home soil, his firm has been the exclusive outfitter of the NFL for the past decade. Indeed, Phil Knight is an avid fan and benefactor of the University of Oregon Ducks college football team and has funded the building of numerous campus sports facilities at his alma mater.

Knight’s athlete-endorsement strategy has carried on to modern day. LeBron James, Rafael Nadal and Cristiano Ronaldo are just some of the high-profile stars from the world of sports currently with Nike. This sort of celebrity cred does not come cheap, however, and Nike’s projected endorsement contract commitments for 2022 stand at over $1.5 billion.

In recent years Nike has begun to associate its brand with sportspeople taking a stand on social justice issues, such as Colin Kaepernick and Megan Rapinoe.

Now 83, Knight holds the title of chairman emeritus of Nike, and while there are few vestiges of the founding family on the board these days, his son, Travis, is to be found at the head of the Laika animation studio his dad bought from Will Vinton in 2002.

Behind all the showy Nike stores and celebrity endorsements, at the heart of the company is a passion for sporting excellence that comes from its founder. In his memoirs, entitled Shoe Dog, Knight states, “The secret of happiness, I’d always suspected, the essence of beauty or truth, or all we ever need to know of either, lay somewhere in that moment when the ball is in midair, when both boxers sense the approach of the bell, when the runners near the finish line and the crowd rises as one. There’s a kind of exuberant clarity in that pulsing half second before winning and losing are decided. I wanted that, whatever that was, to be my life, my daily life.”