If money buys you the White House – as conventional wisdom would have it – then Donald Trump’s time at 1600 Pennsylvania Avenue may be about to come to an end.

Since August, the Democratic party candidate for the Oval Office, Joe Biden, has consistently outraised and outspent the president. But if US politics has taught us anything over the last five years, it’s that conventional wisdom ain’t what it used to be.

Money plays a bigger part in the US presidential election campaign than it does in general elections anywhere else in the world. The dollars donated by wealthy donors and the average man or woman on the street are vital for sustaining a lasting, effective campaign. Without a substantial war chest, it is impossible to keep up an ad blitz in swing states or to criss-cross America to hold rallies.

Indeed, with the obvious exception of the 2016 election, every ascendant to the White House since at least 1976 has spent more than his rivals. And donors have pumped more money into the Democratic party cause this year than in 2016.

Advantage Biden
Apart from in July, the Biden campaign has consistently raised more money than the incumbent’s (see graphic below). More worrying still for Donald Trump is that the deeper into the campaign we get, the wider the gap between the Republican and the former vice-president has become. September saw Biden raise $281 million to Trump’s $83 million.

This pattern has carried over into the final month of the campaign: Biden’s camp spent $145 million during the first two weeks of October, while Trump, by comparison, spent just $63.1 million during the same period, according to the Federal Election Commission.

So, are we all free to get an early night on November 3rd? Not really. After all, Trump defied the odds (and the polls) to win the presidency four years ago, and as the campaign enters its last week, with many battleground states too close to call, the president is pulling out all the stops, both in person and on social media, to ensure that he wins a second term. 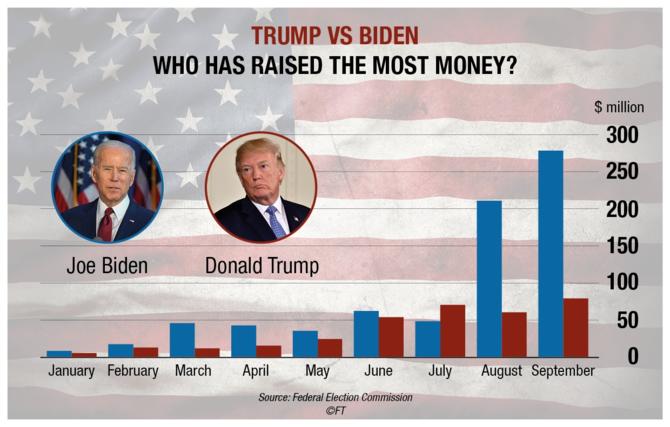 Summary US Presidential Debate: Welcome to the Idiocracy Amy Coney Barrett: A history in seven decisions Biden ahead in polls as election day looms If Trump wins, Europe must go it alone What to expect from US foreign policy under a Biden presidency Trump or Biden? Mixed feelings among European politicians… Trump hangs tough as 2020 election promises nail-biting finish Biden or Trump? How the result of the US vote will impact the UK Trump's policy agenda? More of the same

Strategic-minded CFOs should look to reduce costs in the medium to long-term by investing in digital transformation as w...

Anne Ravanona: “It’s not about taking from the men. It’s about growing the pie”

An in-depth chat with the CEO of Global Invest Her – a funding network that aims to get a million female entrepreneurs f...

We speak to the CFO of package holiday operator Club Med, which has been on an upward trajectory since being acquired by...

The CFO of Axians Portugal tells us about how strategy-minded CFOs should look to reduce costs by investing in digital t...

2CFinance supports companies and investment funds via its CFO and transaction services activities. Since it was founded...

At a time when the having freelance status as a worker grows ever more attractive, companies and freelancers alike are l...

“Every deal is different”

Reboul & Associés celebrated 15 years in existence in 2020. The partners of the boutique firm, each of whom has spen...