The commander of the USS Theodore Roosevelt was dismissed after leaking a letter critical of the US government’s inaction. 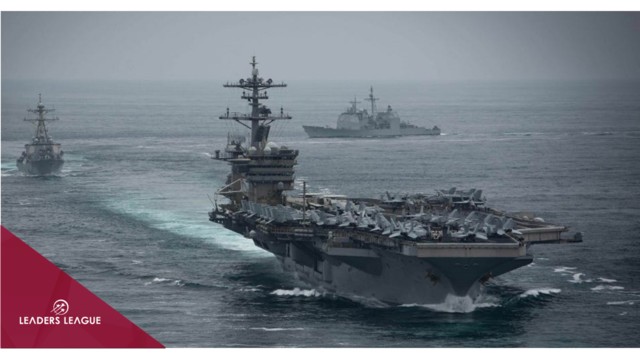 Captain Brett Crozier was removed from his post as captain of aircraft carrier the USS Theodore Roosevelt after criticizing the US Navy for not doing enough to stem the viral outbreak on the ship.

“We are not at war. Soldiers do not need to die,” wrote Crozier in a letter to the Pentagon that called for “decisive action”. According to reports, 100 people aboard the ship have come down with COVID-19, with the outbreak “accelerating” because of confined living conditions. Uninfected members of the vessel’s 4,000 staff are being quarantined in Guam in the South Pacific, away from the island’s locals.

US Navy Secretary Thomas Modly decried Crozier as “exercising extremely poor judgement”, going on to say: “It creates the perception the Navy is not on the job; the government is not on the job. That's just not true.” Many would argue, however, that the US government’s response has been not only slow but, until recently, irresponsible: 6,000 Americans have died from the coronavirus, with over a thousand deaths a day, and the death toll is rapidly accelerating. Fortunately, the Navy has now moved 1,000 sailors off the ship, and is hoping to remove most of the rest in the coming days.

Democratic leaders of the House Armed Service Committee acknowledged that Crozier went “outside the chain of command”, but argued that his dismissal would “likely put our service members at greater risk and jeopardise our fleet's readiness”. They added, “Throwing the commanding officer overboard without a thorough investigation is not going to solve the growing crisis aboard the USS Theodore Roosevelt.” Indeed, the men still on board cheered Crozier rapturously as he walked down the gangway from the ship to the pier.

The decision to fire him raises interesting points about ethical leadership in a crisis. Though codes of behavior, custom and hierarchy are particularly rigid among military organizations, the decision by the US Navy may foreshadow the fate of other public figures in America who criticize the government’s handling of the crisis. So far, certain figures, such as Anthony Fauci, director of the National Institute of Allergy and Infectious Diseases, have given candid media interviews, though have stopped short of criticizing Trump’s leadership. Fauci famously hung his head in his hands after Trump referred to the “deep state department” next to him during a coronavirus press briefing, and yet during an interview with Science said diplomatically, when asked if Trump’s statements deviated from accuracy: “I don’t disagree in the substance. It is expressed in a way that I would not express it, because it could lead to some misunderstanding about what the facts are”. He went on to say, “I can’t jump in front of the microphone and push him down. OK, he said it. Let’s try and get it corrected for the next time.”

It would be hard to replace a figure like Fauci, who has been a calming presence for the country at a time of high anxiety. But whether or not Crozier’s is the first dismissal of several, as the crisis accelerates around the nation, remains to be seen.