Ten of the best

Leaders League profiles a selection of companies taken from our Growth Leaders 2022 ranking. 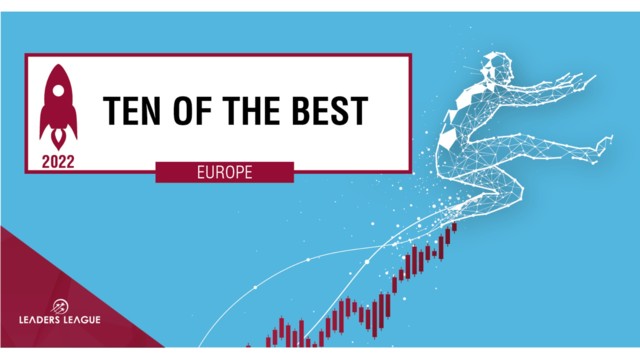 Tissium (No.2): Plaster of Paris
3D printing of polymers and synthetic muscle-tissue bring to mind the science fiction series Westworld, but Paris-based Tissium, a privately-owned medtech company that develops biomorphic programmable polymers for tissue reconstruction, is helping make such technology a reality.
The company, run by Christophe Bancel, younger brother of Moderna CEO Stéphane Bancel, made headlines in the financial press in 2021 following the announcement it has raised €50m in Series C funding. Seeking to improve current-day tissue-repair techniques such as suturing or grafting, which can damage the existing tissue, with both a new technique and, more intriguingly, a new synthetic material which Tissium is developing alongside experts at the Massachusetts Institute of Technology.
Though in the early stages of development, this technology has the potential to revolutionize cardio-vascular and other types of surgery over the current decade.
The proceeds from last summer’s funding round will help Tissium commercialize its nerve repair, hernia repair, and cardiovascular sealant products, which it hopes to obtain authorization to sell, initially in the US, by the end of 2022 and bring to market the following year.

Farfetch (No.47): In fashion
E-commerce is big business and when it comes to fashion and clothing in the era of the coronavirus, the popularity of platforms such as Zalando and Veepee knows no bounds. Leapfrogging them all in our Growth Leaders ranking we have Farfetch, a UK-headquartered company founded by fashion-loving Portuguese entrepreneur José Neves a decade and a half ago.
These days, Farfetch runs local-language websites and mobile apps for international markets in English, Spanish, French, Japanese, Chinese, Arabic, German, Portuguese, Korean, Italian and Russian. The online retailer has offices in 14 cities and employs over 4,500 staff.
2021 was another amazing year for the NYSE-listed company, with stronger than expected growth in the first quarter followed by excellent results through September. Indeed, in the first quarter of the year alone sales jumped 46% and after-tax profits reached $517m.
Fast forward a few months and there was more cause for celebration, with Q3 revenue increasing 33% year-on-year to $583 million. In December, Farfetch announced the acquisition of Luxclusif, significantly expanding its resale capabilities through the development of key features such as automated real-time price adjustment.

Smyths Toys (No. 67): Child’s play
Smyths Toys, the toy superstore chain which has its roots in a rural west of Ireland newsagents, has profited from the void left by Toys’R’Us, notably in the UK and Germany, to register record growth over the past few years. In 2020 the group recorded revenues of just under €1.5 billion. Although the UK remains its biggest market, results in continental Europe have been a real growth driver too, with revenues across its German, Austrian and Swiss stores increasing by €17.98m to €475.35m in 2020.
Appropriately enough, the success of Smyths, which is set to open its 250th store at the start of 2022 owes a lot to the car friendly, out-of-town, no-frills style of stores pioneered by German supermarkets Aldi and Lidl. The firm is run in the main by two of the Smyth siblings, Tony and Padraig, the company’s largest shareholders.
Coinciding with the 1990 Celtic-tiger boom in Ireland, when mid-sized Irish towns expanded rapidly to include retail parks on their outskirts, Smyths quickly moved beyond its Galway City fiefdom. After conquering the Emerald Isle, Smyths crossed the Irish Sea in the early 2000s, and it now has 90 locations in Britain. In 2018, Smyths acquire more than 90 Toys‘R’Us stores in Germany, Austria and Switzerland for an undisclosed sum.

Goiko (No.117): Better burgers
There has never been a better time to be a burger-lover in Europe. After decades of making do with McDonalds and Burger King, these days the gourmet burger is everywhere. And as with every popular trend, the business community has salivated in anticipation. Five Guys, for one, has been expanding in Europe over the past decade, but a number of home-grown hamburger joints are giving the yanks a run for their money. One of the highest rated is Spanish chain Goiko, which opened its first restaurant in Paris a couple of years ago and promptly saw its La Olé burger win best burger during Paris Burger Week 2021. On the menu we can find burgers such as the Yankee, Kevin Bacon or Richie Rich, as well as other enticing food such as nachos, tenders, or bowls made with the ingredients of your choice.
The man behind Goiko is Andoni Goicoechea, a Venezuelan of Basque extraction who decamped to Madrid, initially to work in the La Paz university hospital as an intern, before setting up Goiko in 2013 alongside his sister, thanks to a €50,000 loan from their father. A wise investment by Goicoechea Snr. as 8 years on it has turnover of €81 million.

Hauser (No.182): Freeze framing
In 2019, dairy company Zott – a family run operation with a billion euros in turnover – opened a state-of-the-art 1,300 sqm store for their range of dairy products in Bavaria. With the cheese counter alone containing 140 different types, no expense was to be spared on the refrigeration units. Enter Hauser, an Austrian company which, for 75 years, has been supplying cold storage and refrigeration equipment to companies, initially in Austria but more recently across the continent. And in the climate-emergency era, its focus on energy efficiency has been a big plus for customers who want to improve their bottom line while also doing their bit for the planet. Indeed, the company is a leader in temperature monitoring technology. Hauser recently produced a refrigeration unit which uses 30% less CO2 than a conventional unit and is made from 100% recyclable material.
From €21 million in turnover in 1997 to a cool €312 million last year, the company’s growth trajectory looks set to rise for years to come.

De Wave (No.264): Making waves
Building cruise-liners is a job for the biggest naval shipyards, but unlike warships or tankers, fitting out these floating hotels requires a flair for the esthetic, as well as the functional. Enter De Wave Group which, despite its Dutch-sounding name, is actually an Italian company. Founded in 2014 and headed by the trio of Riccardo Pompili, Paolo Passalacqua and Gabriele Scroglieri, De Wave enhanced its position in the sector with the purchase of rival Precetti three years later.
The expertise of the Genoa-headquartered company’s 600-strong workforce includes installing or refurbishing restaurants, theatres, cabins and toilets on these giant pleasure-boats, for clients include Viking Cruises, Virgin Voyages and Costa Croisières.
De Wave Group completed four major new cruise-ship outfitting projects in 2021 including Holland America Line’s Rotterdam, MSC Cruises’ MSC Seashore, Viking Cruises’ Viking Venus and Virgin Voyages’ Valiant Lady for a total value of approximately €70 million. The company also outfits yachts for an exclusive global clientele.

Studio Babelsberg (No.282): Lights, camera, action!
At the beginning of the 20th century, Hollywood had not yet come to completely dominate the cinema world. Serious competition was coming from the old world, and Berlin’s Studio Babelsberg in particular, where such classic films as Nosferatu and Metropolis were made. Film-makers from all over Europe flocked to the sound-stages of the Potsdam-located studio in the 1920s, a period that would come to be known as the Golden Age of German cinema. With the rise of the Nazi party, the studio became the cornerstone of Hitler’s regime’s propaganda and following the surrender of Germany in 1945, did likewise for the new East German communist rulers.
Since the fall of the Berlin Wall the studio has been restored to its rightful place as a key location for movie-making with major studio pics such Inglorious Basterds, Bridge of Spies and, most recently, The Matrix Resurrections shot there. As a sign of its growing importance, in early 2022 Studio Babelsberg was bought by global alternative asset firm TPG and has become part of Cinespace Studios, the second largest sound stage operator in North America. The German studio will continue to operate as an independent brand.

Gestair (No.360): Flying high
The pandemic has hit the aviation sector hard, but Spanish private jet operator Gestair has navigated the turbulence better than most. Founded in 1977 in Madrid, Gestair operates both as a charter company, as well as provider of aircraft management and maintenance services and has the largest fleet of executive aircraft in Spain.
Gestair specializes in offering private jets for short lease from key airports in Spain and has a fleet of 32 ultra-long, long, medium and short-range aircraft based primarily at Madrid-Barajas airport. The company, which was acquired by investment fund GPF Capital in 2019, has some high-profile clients, including the partner of footballer Christiano Ronaldo, Georgina Rodriguez, for whom Gestair keeps private jet on standby. Gestair opened its second hangar at Madrid-Barajas airport last autumn, giving the company over 23,000 sqm devoted to housing and maintaining aircraft. Its fleet is made up mainly of Bombardier, Gulfstream and Dassault jets.
Last November, the Spanish confederation of small and medium enterprises named Gestair’s repair and maintenance division as one the companies with the fastest and most sustained growth in the country in 2021.

Sioux Technologies (No.393): Dutch masters
The Netherlands has an excellent reputation for innovation in the industrial technology sector. It was in the shadow of the great industrial city of Eindhoven that ASML, the world’s the largest supplier of photolithography systems for the semiconductor industry, was founded in the mid-80s. A vibrant Dutch industrial-tech ecosystem has developed over the past few decades and with six offices in the Netherlands, three in Belgium, one in Germany and one in China, Sioux Technologies is one of its leading lights, as its recent performance demonstrates. Turnover at the company established a quarter of a century ago by Hans Duisters and Erik van Rijswijk was up 51% in 2020 to €72 million.
Sioux Technologies’ business model is ambitious, supplying tailor-made solutions for tech-dependent companies in the semi-conductor, healthcare, telecommunications and auto industries, among others. Behind the latest solar-powered vehicle or surgical robot Sioux Technologies, and its army of 700 engineers, is likely to be found.

Omnipollo (No. 477): Beer appreciators
For centuries a drink of the working class, beer – like tea before it – has moved upmarket since the millennium with the craft-beer industry earning a hipster, some might say snobbish, following for its ever more esoteric, if often delicious, concoctions. Indeed, these days it’s not unusual for a can to come with detachable artwork (otherwise known as a sticker) and cost upwards of a tenner.
Taking this marriage of art, artisanal beer and commercialism to its extreme are Swedish duo Henok Fentie and Karl Gradin. In 2010 Henok, the brewer, and Gradin, the artist, formed Omnipollo as a ‘gypsy brewing’ enterprise, which involved the pair setting up shop temporarily in a bar, art studio or private residence while producing a limited batch of beers, with each new type coming with a one-off label designed by Gradin, something which has made Omnipollo’s products as coveted for their collectability as their drinkability. Customers eagerly wait for the latest creations and promptly buy them up on the Omnipollo website. After years of nomadic existence, Omnipollo established a permanent brewery in the unusual surroundings of a former church in Northern Stockholm in 2020, and with Omnipollo bars now open in Hamburg and Tokyo, the Swedish brand’s reputation ─ not to mention value ─ is set to grow in the years to come.