Stéphane Bancel has been at the head of biotech company Moderna for nearly a decade – yes, that Moderna. He did not wait for the pandemic to strike bet on a technology that, by drastically accelerating immune effects, is now proving to be the ideal weapon in the fight against the coronavirus. 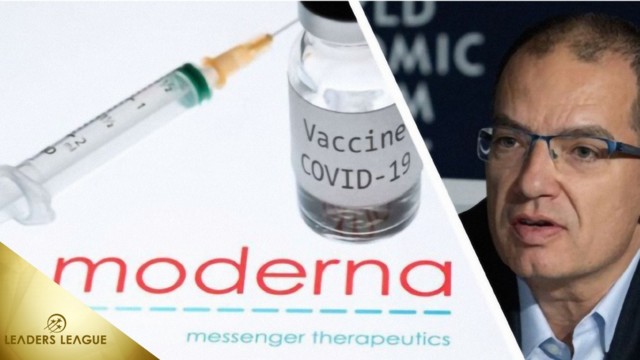 Forty-two. According to the latest Forbes rich list, this is the number of French billionaires in 2021. Stéphane Bancel, head of the Moderna Therapeutics laboratory, has made a most remarkable entry onto that list, catapulting to 23rd place among the wealthiest French, with an estimated net worth of $13 billion. His secret? Owning 8.7% of the shares of the company he runs, a company whose stock is up more than 500% in 12 months. The reason for Moderna's precipitous (and unexpected) growth is good old fashioned supply and demand ─ it was one of the first laboratories in the world to manufacture a vaccine against Covid 19.

At the start of 2020, who outside the pharmaceutical and medical communities knew about Moderna Therapeutics, a Massachusetts-based biotech company? Today, its name is on everyone's lips as one of three western labs (along with Pfizer and Astra Zeneca) to have gotten their vaccines approved for use – and thus to market – first, and of this trio, two players have stayed the course in 2021: Pfizer, the behemoth, and Moderna, the young upstart. Together, Pfizer and Moderna account for more than 60% of all Covid-19 vaccine sales in 2021.

The man behind this sudden breakthrough at the company founded barely a decade ago is Stéphane Bancel, a 47-year-old Marseille native. A graduate of Harvard Business School, he worked for bioMérieux Laboratories (where he became CEO at the age of 33) and then for American pharmaceutical group, Lily. What is Moderna speciality? Messenger ribonucleic acid or mRNA, a novel vaccination technology previously reserved for animals.

Trump card
With such a potentially lucrative breakthrough to hand, Stéphane Bancel quickly raised €5 billion in capital without his company yet having turned a profit. A tour de force which, in itself, says a lot about the man whose management is routinely described as harsh when it is not qualified as toxic (to the point of causing a number of departures at the Cambridge, Mass., firm, it has been claimed.) but whose flair for business and bold decision-making abilities are beyond dispute.

At the beginning of 2020, he attended the Davos forum, where the virus was already circulating as a subject of debate. Sensing the scope of the coming healthcare emergency, and the unparalleled accelerating effect it would have on Moderna, he put the company into overdrive studying the virus.

On March 2nd of that year, Donald Trump, in the midst of pre-lockdown turmoil, invited several biotech and big pharma bosses to the White House. Stéphane Bancel was one of them. To a president who wanted a vaccine and wanted it yesterday, he replied that his was "almost ready".

Not quite, but Donald Trump gave him the means to achieve his ambitions: $2.5 billion to accelerate the process and produce 100 million doses. On March 16th, Moderna became the first biotech company to announce the launch of human clinical trials. The verdict? 95% effectiveness. This was a more than encouraging result, but Anne Sénéquier, an epidemiologist and medical specialist at Iris, was quick to temper expectations. "What this proves is that the vaccine is effective two weeks after the first dose, nothing more," she explained. "It's the Phase 3 trial that will tell us if it is effective and won't cause long-term harm. The problem is that this phase was scheduled to last until the end of 2022 and the vaccine is supposed to be distributed within a few months. This is unheard of in the health world."

Race for the prize
In terms of accelerated timeframes this had never been seen before outside of wartime, but also in terms of the properties of Moderna's vaccine which, like Pfizer's, is based on a revolutionary technology according to the Sénéquier, who added, "with mRNA, it is the body itself that manufactures antigens present in the immune system to enable it to fight the virus. With a traditional vaccine these antigens are manufactured in the laboratory. This breakthrough allows us to drastically reduce the time it takes to produce a vaccine: where before it took ten years, now it only takes ten months!"

This advance came just in the nick of time, with the world facing a pandemic of unprecedented propotions, and there is no doubt that "Moderna had a head start", as Anne Sénéquier puts it. "Stéphane Bancel played his cards very well; investing in mRNA technology was a gamble, but he took it, and Covid saw that gamble pay off spectacularly." Unsurprisingly, Bancel's oft-repeated motto is: "A lot of risk equals a lot of money".