Thompson & Knight has named Rodolfo Rueda Ballesteros as a new partner in its Mexico City office, and who forms part of the firm’s international energy practice. 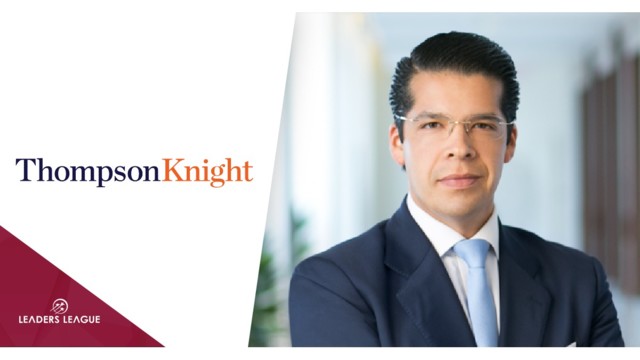 Rueda Ballesteros is an international business attorney with a focus on cross-border natural resources, energy, and infrastructure. He has extensive experience on transactions involving projects in Latin America, with a special focus on all facets of oil and gas, power, and renewable energy projects.

He also advised on the drawing up of the North American Free Trade Agreement, and its replacement, the US-Mexico-Canada Agreement (USMCA), and has advised extensively on dispute resolution in the Mexican energy sector.His experience includes advice, support, and closing of the lease management of offshore oil rigs of a Norwegian

, with an approximate value of $290 million, the structuring, advising, and closing of an approximately $82 million share purchase and sale agreement between Iberdrola and a subsidiary of Mitsui & Co., with respect to the participation of the former in 13.25% of Gas Natural Mexico.

He advised on the £905 million ($1.77 billion) IPO of Fresnillo PLC before the London Stock Exchange, and advised on the structuring, representation, and accompaniment of Spanish energy company Iberdrola’s expansion plans in Mexico since 2012, with an investment of approximately $5 billion, of which $3.5 billion have been allocated to projects initiated after the approval of the energy reform in 2013

He also represented the winning bidders in the accompaniment and structuring of participation in various international public tenders convened by Mexico’s state-owned power utility CFE. me


He is a certified lawyer by the Supreme Court of Texas and the State Bar of Texas as a foreign legal consultant, and earned his law degree from Mexico’s Universidad Anahuac.

Rueda Ballesteros’ nomination as a partner comes as one of nine promotions to Thompson & Knight. The other promotions took place in the firm’s Dallas, Houston and Fort Worth offices.

In addition to its Mexico City office, Thompson & Knight also has offices in the northern Mexican city of Monterrey. In the US, in addition to the abovementioned offices, the firm has a presence in Austin, Texas, and outside the US, in Algiers.