The Green Economy: Europe starts to sow the seeds

The evaluation process for the various EU member-states’ national recovery plans is underway in Brussels. 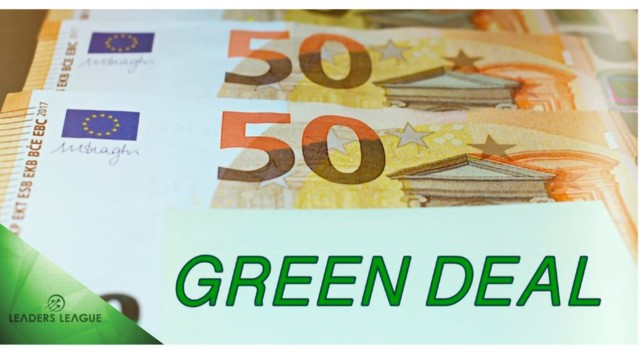 Each country is looking to secure a share of the €750 billion EU recovery fund, but in order to do so, member-states will have to jump through a number of hoops in the shape of the European Commission’s ambitious climate-change objectives.

Come one, come all. January 1st marked the beginning of a four-month window for member-states to submit their proposals to access grants and loans available under the EU recovery fund. After April 30th, the Commission will have two months to review each submission before giving their initial verdict. The applications will then be sent before the Council of Europe for ratification on a case-by-case basis.
Countries are free to draw up their own roadmap, but there are certain criteria that each must fulfill, laid out in advance by the various EU institutions. The objective? To ensure that the reset European economy will be sufficiently modern and sustainable to compete in the decades to come. To this end, a third of all investment spending and reforms proposed by each country are expected to facilitate the ecological transition.

Strings attached
Indeed, just like with the other principal criteria, the percentage of funding devoted to the ecological transition has been the subject of lively debate. The agreement reached by the heads of the various EU countries last summer envisages allocating 30% of total EU spending to the fight against climate change. The vast majority of this will be in the form of loans or grants.
In all, natural resources and the environment will benefit to the tune of €373.9 billion, with €17.5 billion coming directly from the EU recovery fund and the remainder to be raised as part of the EU’s multi-annual budget (2021-2027), which is set to top €1 trillion.
So, could some countries risk missing-out on funding altogether? Yes and no. In order to avoid having their proposals rejected, countries were sure to test the water before submitting their formal requests. But certain other factors could yet complicate matters. Some EU members, notably the ‘Frugal Five’ (Netherlands, Denmark, Sweden, Finland and Austria) were against such a large financial envelope for the recovery plan and sought and secured a veto on individual countries plans.
In addition, even if a country’s plan is approved, payments can be withheld if states fail to respect the rule of law. This clause could come into play with certain Eastern European countries such as Poland or Hungary where recent changes in legislation have marked a departure from traditional EU values.

France relance
For its part, France will benefit from European aid to the tune of €40 billion, which will form part of a €100 national ‘relaunch’ programme unveiled by Paris last September, based on the themes of the environment, competitivity and unity. In all, €30 billion will be dedicated to green investment. Dubbed France Relance (France relaunches), the ambitious plan will seek to make the French economy carbon neutral, foster sustainable tourism and modernize the country’s hospitals.
And Paris did not wait for the green light from Brussels to put its plan into action. The government has been releasing monthly progress reports on its recovery plan since last autumn. As of March, the government had received 6,682 submissions for infrastructure funding from companies and local authorities wishing to make their buildings more energy efficient at a total budgeted cost of €8.4 billion – more than double the €4 billion initially earmarked for this category.

"In order to avoid having their funding proposals rejected, countries were sure to test the water before submitting their formal requests"

Under the plan, France will consecrate €6.7 billion to improving energy efficiency in private and social housing, offices and state-owned buildings. This should provide a job’s boost too.
Another major topic is reducing industrial carbon emissions, on which France is to spend €1.2 billion by the end of 2022. The first round of submissions, which closed at the end of 2020, saw 73 projects totaling €885 million in investments received, on top of €245 million in grant requests.
The car industry has also been targeted. During the first 11 months of 2020, the electric vehicles market topped 6% of total car sales in the country, compared with 1.9% for the same period in 2019. Emmanuel Macron wants to see one million electric cars on the autoroutes by the end of next year and to do this the French president has authorized a budget of €2 billion.

Rio markers
If the amounts being discussed are without precedent, for some NGOs it is not going to be enough.  Analyzing the fine print, they find the taxonomy (a system of classification for ‘green’ assets) governing this 37% to be too nebulous. In addition, the rest of the money can be earmarked for assisting polluting industries such as aviation, which, admittedly, has suffered greatly from a downturn in air traffic during the pandemic.
Concerning taxonomy, the EU follows the so called ‘Rio Markers’. There are three possible values (or scores) for the Rio markers, indicating whether the Rio Convention themes are (0) not targeted, (1) a significant objective or (2) a principal objective of the action. The values are attributed according to the extent to which the themes are explicitly addressed. For the recovery plan, the EU has decided to use 0%, 40% and 100%, respectively.

What type of financing?
To finance the plan, the EU intends to borrow from the markets at a favorable rate enjoyed by certain member states. In order to do so, the national parliaments have to give Brussels permission to increase its own-resources ceiling. In addition, since January 1st, a new plastics tax is in effect which is set to add between €6bn and €8bn to the EU’s coffers per year.
Other projects in the pipeline include a border carbon tax that would see imports taxed according to their contribution to climate change, in addition to emissions trading quotas on aviation and maritime traffic. Brussels has even presented its plans to reduce greenhouse gas emissions by 55% by 2023, relative to 1990 levels.
If the €750 billion EU recovery plan is to succeed, it will require significant private-sector buy in. And succeed it needs to, as the future of the bloc may be riding on it.