Alberto Varillas, president of Alianza Pro Bono’s board of directors and partner at Garcia Sayan Abogados, tells us about the work it does, the cases generating the greatest impact and its upcoming projects, in addition to the cultural barriers in Peruvian society preventing law firms from incorporating pro-bono work. 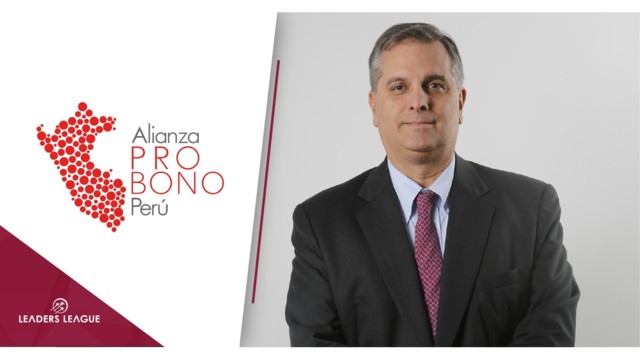 Leaders League: When was Alianza Pro Bono created and how does it work?
Alberto Varillas: The Alliance was formed in 2013 following the signing of the Pro Bono Declaration of the Americas, promoted by the Cyrus Vance Center in New York. Initially there was a group of firms that worked on the issue in an organized but informal way. The Pro Bono Declaration sought to encourage a commitment to a minimum number of pro-bono hours per lawyer and more organized work.

Sixteen law firms in Lima are currently part of the Alliance. Our executive director and her team are dedicated to generating relationships with legal aid centers and also filter the cases that come to the Alliance to verify they qualify as pro-bono.

Once the executive director determines that a case qualifies, she logs it in our dedicated computer platform, and the firm’s coordinators automatically receive the request. If they are interested, they take responsibility for the case.

Do you have any kind of control over the commitments accepted?
Having pro-bono cases registered allows the Alliance administration to certify how many cases are taken and to make sure that all the firms do their share of pro-bono work.

This allows us to knock on the door of a firm and say "it's July and you are doing a third of the pro-bono hours you did last year, what's going on?” This type of direct follow-up with firms helps maintain the flow of pro-bono work.

Currently, a law firm can be excluded from the alliance for non-payment of dues, but there is no sanction for not doing pro-bono work. There is a kind of moral sanction, however, as every year the results are presented at the Alianza Pro Bono General Assembly and there are also individual meetings to discuss the performance of individual firms.

Which cases have generated the greatest impact?
We have a program called the Pro Bono Challenge, via which university students are asked to identify legal problems in their regions and present them in competition. A jury chooses the winners, with the top three projects developed by participating firms.

Past projects range from providing legal information to parents of kids in juvenile prison, to doing the legal work that allowed a group of farmers to be able to export their products, as well as drafting bills and removing obstacles to their being adopted in certain regions. In addition we helped draft protocols on how to act in cases of domestic violence and bills on gender identity.

What was work like during the pandemic?
Between 2019 and 2020, the number of cases we received doubled. Little by little, firms managed to organize themselves to continue providing pro-bono work and the fact that the work of public bodies switched to online helped a lot, because much of the work we do is related to these institutions, such as lawsuits before the judiciary, complaints before the prosecutor's office, and proceedings before public registries, among others.

What projects do you have in mind next?
We are focused on this year's Pro Bono Challenge. We take a modern, collaborative approach because, often times projects are presented from a theoretical point of view and not a practical one, so they have to be redefined in order to be feasible.

We will continue to issue manuals of various types and to train people and grass roots organizations through seminars. Several webinars have been held during the pandemic.

Lawyers are perhaps the most conservative guild there is. There are firms that are adapting more easily to the current reality but some are taking longer to recognize the importance of pro-bono work.

Often, it is the young lawyers who push do pro-bono work the most, while the older ones tend to have an issue with it. The generational change taking place should see pro-bono work become part of a law firm’s daily activity.

The important thing is that firms recognize that pro-bono work is just as important as work for paying clients and the same effort and quality of service should be provided.

Pro bono work plays an important role in the professional activity of lawyers and the role of the Alliance is to help more firms to do more of it.