Two years on from the fire that almost consumed Paris’ Notre-Dame Cathedral, Leaders League spoke to Jean-Louis Georgelin, the man tasked with orchestrating its restoration. 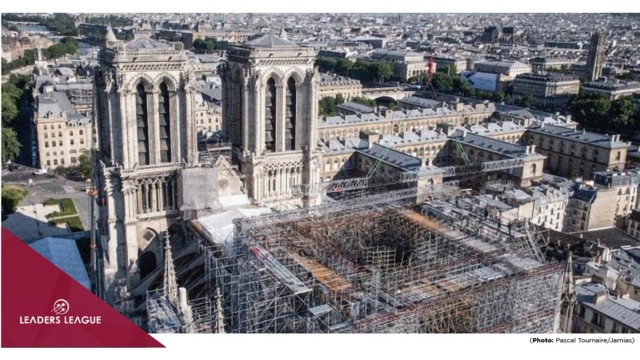 Leaders League: How would you sum up the Notre-Dame restoration project?
Jean-Louis Georgelin: Many have labelled it the reconstruction of the century. I don’t really like that phrase since, in terms of difficulty, there are many projects that are harder. What makes this project special is the fact that the whole of France is rooting for us to succeed.

Indeed, when the fire was raging, the entire world was on tenderhooks. They realized that Notre-Dame was not just at the heart of Paris, but was the heart of France. It is from this spot that distances are calculated, so if you are 80 miles from Paris, you are, in fact, 80 miles from Notre-Dame Cathedral, whether you know it or not.

People mustn’t lose sight of the fact that, for all its architectural splendor, we are first and foremost engaged in the restoration of a catholic church. If the Chateau of Versailles had caught flame, it would not have moved people to the same extent, and we definitely wouldn’t have seen the same outpouring of support from people across the world.

The fire stirred something spiritual in people during that awful April night two years ago, notably among Christians everywhere. What is extraordinary is that in the intervening 24 months, interest in Notre-Dame has not waned.

Can you tell us any more about the origins of the fire?
It started in the vicinity of the roof and spread to cover the entire attic. In reality, the damage came from the collapse of the steeple through the transept and from the lead cinders which spread to the four corners of the structure. Had there been no steeple, the damage to the interior of the cathedral would have been considerably less. As regards the root cause of the fire, the investigation remains ongoing.

Now that the conservation phase of the project is at an end and the structural integrity of the cathedral assured, why has there been no event to mark the occasion?
That is not quite correct. The conservation effort has in fact entered its final stage, which should be completed sometime this summer. As I have mentioned, while Notre-Dame is a masterpiece of gothic art, it is primarily a place of worship. In its current state there are three main impediments to it serving that function: Lead, Covid and the ongoing restoration work. There is no question of allowing the general public to return any time soon.

That said, the cathedral has been able to host four small-scale ceremonies over the last two years, the first of which was held on June 15th 2019 on the anniversary of the dedication of the cathedral. Ceremonies also took place at Easter and Christmas in 2020 and on Holy Thursday this year.

What makes this project different from the average heritage site restoration?
Three main factors set the Notre-Dame restoration apart. The first is the financial resources at our disposal. The second is the five-year deadline we are working to, which the president gave us, so we need to avoid any sort of mission-creep. The third is the unbelievable level of scrutiny we are operating under, with an unremittingly high level of media interest.

"There are three main impediments to reopening Notre-Dame: Lead, Covid and the ongoing restoration work. There is no question of allowing the general public to return any time soon"

Why were you, personally, chosen to lead the restoration? Was it because you are a devoted catholic or is it more to do with you being a decorated general?
You really need to ask Emmanuel Macron that question! If I were to speculate, I would say that he was looking for someone who was both catholic and who had an intuitive understanding of the workings of the French state, in addition to someone with the authority to marshal all the different teams working on this project to reach our common goal: giving the cathedral back to the faithful and the general public by 2024.

Opinion was split on whether the restoration of the Notre-Dame should follow its existing design or incorporate new elements. Where do you stand on this?
On July 9th 2020, the French architectural preservation society, in concert with the culture ministry came out in favor of an identical restoration. The Viollet-le-Duc steeple will be rebuilt using the same material as the original: oak for the wooden frame and lead for the spire covering. The majority of architects were in favor of this approach, as I was.

The decision is in line with the prevailing philosophy of those in the heritage community, which is that any restoration of a historical building of this stature should cleave to the original design, as outlined by the Charter of Venise. In addition, restoring the cathedral to its previous form has achieved consensus in the donor community and among the general public.

Speaking of donors, they have collectively pledged over $1 billion to this project. How do you account for such largesse?
The kindness of 340,000 donors in 150 countries has allowed us to collect €833 million. It must be stressed that this wave of generosity is without precedent when it comes to French philanthropy and, two years on from the fire, it has not abated. For evidence of this you need only look at fact that 1,000 oak trees have been donated to allow us to restore the steeple of the cathedral, furnished by the French forestry office in partnership with local authorities and private landowners.

I would like to point out that 50% of the trees come from public forests and the remaining half from private owners and each French region contributed, which is, I think, a wonderful symbol of French fraternity.

Where would the restoration effort be without this philanthropy?
The generosity of doners has been a decisive factor in allowing us to remain on target to finish the restoration on time. In France there are around 45,000 listed buildings and monuments. The government allocates €350 million per year to their upkeep. A building of the stature of Notre-Dame could expect to receive around €2 million per year, based on which it would have been difficult to obtain the funds necessary for an undertaking of this size via the usual channels. Securing the structure alone cost €165 million.

Among the donors, there have been the large benefactors, whose aid has been invaluable, but we mustn’t forget people of more modest means. I would like to sincerely thank them all.