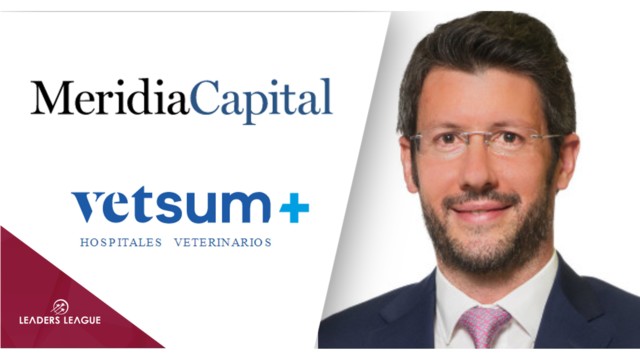 Meridia will partner with Kipenzi, Vetsum’s majority shareholder, to “further support Vetsum’s organic and inorganic growth with a goal of accelerating its ‘buy and build’ consolidation strategy”.

Vetsum has a portfolio of 11 hospitals and offers a range of veterinary services including primary and critical care, surgeries and advanced diagnostics.

Meridia Private Equity I is a €105 million private equity fund that targets companies headquartered in Spain. It was launched by Meridia Capital Partners in 2016.

Meridia Capital Partners is an alternative fund manager that has raised more than €850 million since its launch and has €250 million euros of assets under management.

David Torralba, private equity partner at Meridia Capital, said: “With positive and resilient market fundamentals and a high degree of fragmentation, the Spanish veterinary hospital segment represents a very compelling opportunity for value creation through a consolidation strategy, as we have seen in other European countries.

“Vetsum represents Meridia Private Equity’s seventh investment in less than four years proving our commitment in supporting Spanish companies and growth projects. We continue to see many attractive investment opportunities in the Spanish mid-market corporate universe, which will remain as a key area of focus for us in the future.”

A statement from Kipenzi’s shareholders said: “We are happy to welcome Meridia Private Equity as our new partner in Vetsum. In addition to the sector and M&A expertise that the Meridia Private Equity team brings, their investment will allow us to accelerate Vetsum’s inorganic expansion plans and further consolidate its leadership position in Spain.”

Vetsum is Meridia Private Equity I’s seventh investment. The previous investments it made were in the following businesses: Sosa Ingredients, a producer and distributor of food ingredients; Grupo Andilana, a restaurant chain and hotel operator; Futbol Emotion, an omnichannel football retailer in Spain and Portugal; Volotea, a Spanish-based airline offering point-to-point flights between small-mid sized cities throughout Europe; Kipenzi, a pet care specialist in Spain and Portugal (divested in 2019); and Zummo, an automatic fresh fruit juice extraction machine manufacturer.