Schellenberg Wittmer: "We sent clients seeds for planting at home, to let them know we were thinking of them"

Schellenberg Wittmer's managing partner Philippe Bärtsch and litigation co-heads Louis Burrus and Clara Poglia talk us through how the firm came together during the pandemic. 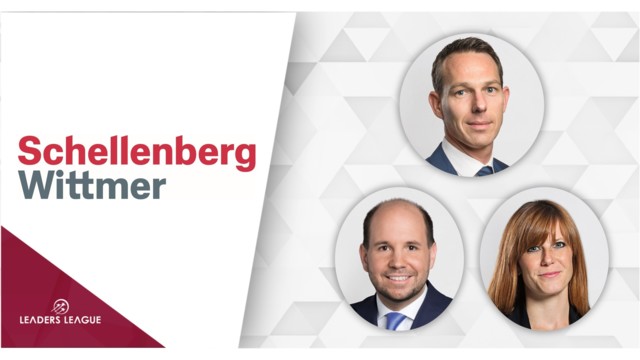 Leaders League: Covid-19 obviously forced rapid change across the legal sector. How did Schellenberg Wittmer innovate to deliver the best value internally and externally during the pandemic?

Bärtsch: Early in March last year, we were ready before any firm in Switzerland to go fully virtual, having improved our IT systems in February to facilitate this. It took place in a few days – a big challenge but a big success. Then we had to ensure we stayed connected internally and with clients. For example, we set up an internal social media platform to remain close, and we organized “town halls” to keep everyone in the firm updated. There was plenty of communication, not least about Covid-specific rules. To stay in touch, the firm also set up virtual apéros, dinners and pub quizzes to maintain team building efforts. At the client level, we rolled out specific initiatives on Covid-related issues, such as force majeure. We continued to publish frequently and organize webinars and other initiatives to remain close to our clients.

Burrus: Indeed. For example, during the first lockdown, we asked for clients’ home addresses, and if they consented, we sent them seeds to plant something on their balcony or in their garden. We wanted to let clients know we were thinking of them during this time, and got great feedback on this initiative.

Bärtsch: Since we couldn’t do a Christmas dinner, we sent every employee a box with ingredients, food, and a video recipe featuring a famous Swiss chef. Our people made the food at home and posted the photos on our internal social media platform. We recognized that during Covid-19, there was an even greater need for communication and togetherness than in normal times.

Many have argued that arbitration will permanently become more reliant on videoconferencing; fewer are claiming this will be the case for litigation. Do you agree? Why do you think this is?

Bärtsch: We’ll likely continue to use videoconferencing for smaller disputes, but for larger disputes, in-person proceedings will in my view resume. Much is lost, whether as arbitrator or counsel, via videoconferencing. For example, discerning the sincerity of a witness is much harder; when you plead, it’s harder to know which arguments are effective on the arbitrators.

Burrus: Some courts didn’t even have any camera equipment! However, it’s worth considering that Switzerland has a strict framework for cross-border cooperation. There is a greater need for deposition by Swiss witnesses taken in Switzerland in relation to proceedings all over the world, such as in Singapore or the US. This procedure is not so straightforward in Switzerland; specific authorization is required for a deposition to be held on Swiss soil. Since last summer we have been engaged in several matters of international cooperation. Videoconferencing allows foreign witnesses to be heard without having to attend the trial. This is likely to be increasingly used in the future.

Could you highlight two of the most interesting cases in litigation or arbitration you’ve handled in the last year? We’d like as much exciting detail as possible, so if anonymizing the parties’ names will help, that would be fine.

Burrus: We were part of the defense team in a high-profile litigation in the UK; it was one of last year’s ten largest cases before the commercial court. After a virtual hearing held last summer, the High Court accepted the jurisdiction’s challenge of our client, thanks to our interpretation of Swiss law and international conventions such as the Lugano Convention.

We have also been very busy with force majeure advice, especially in relation to major sports contracts covering a range of matters, from sponsorship to broadcasting. There have been numerous issues and remedies via local courts and arbitration. Given how quickly Covid-19 regulations and guidance have been implemented, this has been a very fast-moving space.

Bärtsch: We acted for RUSADA [the Russian Anti-Doping Agency] in a case against WADA [the World Anti-Doping Agency]. This was probably the largest CAS [Court of Arbitration for Sport] dispute to date and attracted a lot of media attention globally. There were many parties involved; very complex factual and legal issues (including compelling human rights issues: WADA was seeking measures against Russian athletes which were in our view discriminatory); and a short timeframe. WADA was pushing for a quick resolution, even though the amount of data submitted was 23 terabytes, which needed thousands of hours to review and digest. The hearing took place over a week in a hybrid form: counsel was requested to go to a hearing center in Lausanne, but the tribunal attended via videoconference. The outcome was positive: most of the sanctions that WADA was seeking were either significantly reduced or dismissed. Most importantly, Russian athletes will be able to participate in sports competitions without any special admissibility requirements, which would have been clear discrimination in our view.

Arbitration was originally meant to be a real alternative to litigation: cheaper, speedier, and more final. Would you agree that over the years, arbitration has in many ways increasingly come to resemble litigation?

Bärtsch: I don't think so. While it may be true that arbitration has become more expensive and complex, when you look at the whole process – such as all the rounds of appeal in litigation, and the difficulty of hearing witnesses not based in the country in court litigation – arbitration delivers much faster and more final outcomes. That’s what businesspeople want. To some extent, the efficiency of arbitration depends on how efficient the arbitrators are, but if you choose the right arbitrators, you get a very efficient and attractive process. And in Switzerland, an award can only be challenged on very limited grounds before the Swiss Supreme Court. Most setting-aside proceedings last no more than six months.

What has Schellenberg Wittmer done to foster diversity and inclusion in the workplace?

Poglia: I’m very proud of the last few years’ developments. We have a key talent programme for women; we try to spot very talented female associates and intervene as soon as possible to help them onto the partner track. The firm participates in several women’s networks, such as the WWCDA [Women’s White Collar Defense Association]. We participate in other associations, such as the Women’s Business Society, and have work tables between the partners on the topic of diversity. Our initiatives have brought some successes: among the partnership, we’ve added six more women since 2019. We have a woman in our management committee, and several female department heads. The firm has been recognized in the Women in Business awards.

Bärtsch: We also recently launched a LGBTQ+ think tank, IDEA [Inclusion, Diversity, Equality and Awareness], and have LGBTQ+ people in our management committee. We have diversity in our DNA, and a young, dynamic and diverse partnership. I truly think that we are the most diverse large Swiss firm, and I am very proud of it.