Robson de Oliveira is co-founder and member of Demarest Advogados' racial diversity and inclusion committee, D Raízes, and a member - via Demarest - of the Legal Alliance for Racial Equality (Aliança Jurídica Pela Equidade Racial). In this feature interview, Mr. de Oliveira discusses the Legal Alliance's main objectives and initiatives, how black individuals can participate in diversity and inclusion programs and how to reduce racial inequality in the Brazilian legal market, among other topics. 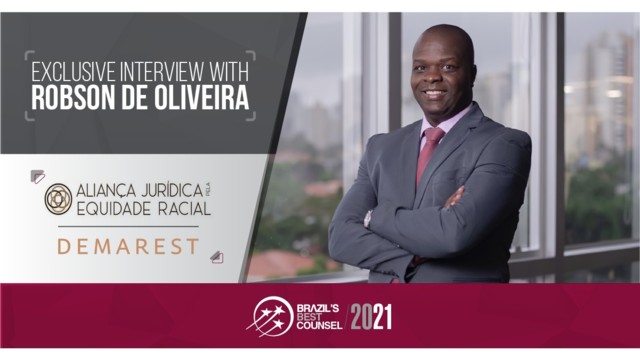 Leaders League. What is the Legal Alliance for Racial Equality and what are its main goals?

Robson de Oliveira. The Legal Alliance for Racial Equality arose from the union of Brazil’s nine major law firms (Demarest, BMA, Lefosse, Machado Meyer, Mattos Filho, Pinheiro Neto, TozziniFreire, Veirano, and Trench Rossi Watanabe) with the goal of promoting equality and racial inclusion within law firms and the wider labor market. The Alliance began in November 2017 with a ‘working group’ during an event at the Fundação Getulio Vargas (FGV) School of Law, with a series of debates involving these major firms which were preoccupied with the inexpressive presence of black men and women within their partnerships and their general workforce.

Could you tell us about the main initiatives sponsored by the Legal Alliance for Racial Equality? What have been the practical impacts of these initiatives?

The Legal Alliance promotes diversity and inclusion initiatives such as lectures and roundtables. The Legal Alliance’s key commitment is studying, analyzing and implementing affirmative policies and initiatives within the legal sphere and within our entire organizational structure. Additionally, partner law firms have their own internal committees, such as D Raízes, our racial equality committee, of which I am one of the co-founders, which promotes initiatives not only for our staff but also for the general public, with the aim of raising awareness, thus promoting genuine inclusion which does not stop at the mere hiring of black male and female professionals.

The real-world impact lies in instilling awareness within all the professionals at member firms, resulting in a new perspective from the recruitment process of new professionals up to their effective hiring, seeking to identify their potential and investing in their potential careers at the firm.

How can black individuals participate in and benefit from these initiatives?

One of the initiatives promoted by Demarest, via D Raízes, is opening the doors of our firm to a host a series of initiatives led by black students, in a true form of affirmative action in the sense of introducing them to our structure, explaining the internal operational dynamics of a large firm and sharing the knowledge of our experts in several fields. Enrollment is periodically opened at universities and has been leading to very positive results in terms of strengthening our ties with the legal community of tomorrow.

Which measures are necessary to reduce racial inequality in the Brazilian legal market and wider society?

Many measures must be adopted but, overall, the key measure is the implementation of truly antiracist values. The legal market must question the fact it does not have an expressive quantity of black professionals within its ranks despite existing in a country in which the majority of the population consists of black men and women.

All must carefully reevaluate their practices and identify the barriers which are impeding the access of black professionals and subsequently reshape the selection and admission processes so that these environments become accessible to black individuals.

In Brazil, the racial quotas policy is educating increasingly more black men and women in Law and the market must look at these individuals as capable of performing to the highest standard, acting without discrimination or prejudice throughout the recruitment process.

What new initiatives can we expect from the Legal Alliance over the next 12 months?

As a participating member via Demarest, I can affirm that we pretend to maintain our commitment to the Alliance for the promotion of education, the sharing of knowledge and genuine inclusion of black professionals within our workforce.

Although we are experiencing a global crisis, we are aware and mindful that it is in these moments that the rights of the most vulnerable are attacked. As such, we will remain vigilant so that our goals are not abandoned despite market adversities, as these times require creativity and action.