Ilham Kadri, a Moroccan with an extraordinary career and an iron will, has earned a reputation to match her ambition. 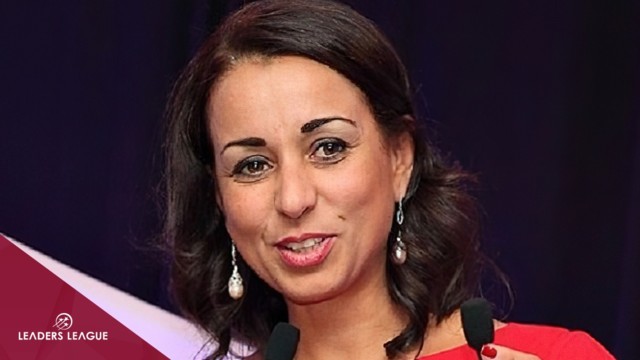 Supporting staff during the lockdown, launching solidarity funds, putting in place measures to speed up the economic recovery, redefining the very idea of what a company can and should be… the CEO of chemicals giant Solvay has hardly been twiddling her thumbs in the twelve months since the pandemic hit. Her industry has paid off, since Solvay managed to avoid a significant downturn and was even able to boast of a 5% increase in turnover for the fourth quarter of 2020.

The appointment of Kadri as CEO of Solvay in 2019 came as a surprise to those who prize pedigree over performance. Although she is not part of the establishment nor did she study at one of the industries preferred universities, the Solvay board were bowled over by her vision, charisma, management style and, not least, her track record.

During her previous jobs, the 40-something helped turn around the fortunes of cleaning chemicals company Diversey. Under Kadri’s stewardship, profits rose and growth was impressive, but more than the bottom line, she also improved staff morale and engagement.

Champion of ‘invisible heroines’
“We don’t make soap, we save lives,” Kadri famously declared during her Diversey days, a choice of words that could have come across as pompous if handled clumsily, but Kadri was speaking from personal experience.

Even by Moroccan standards, where 20% of the population live below the poverty line, Kadri grew up in a family with very little. In her final years of high school, she contacted Typhoid from drinking contaminated water and could have died.

Raised by her grandmother, a cleaner who Kadri admired greatly, the CEO has made it her life’s mission to speak up for society’s ‘invisible heroines’ ─ every-day women making a real impact ─ and to improve the lot of women in the professional world.

"Raised by her grandmother, a cleaner who Kadri admired greatly, the CEO has made it her life’s mission to speak up for society’s ‘invisible heroines’ ─ every-day women making a real impact"

The issue of inclusion was a recurring topic at the most recent edition of the Women’s Forum, and speaking to the press covering the event Kadri remarked, “Without wishing to put anyone’s nose out of joint, just because there is a female vice-president in the White House or a woman at the head of Solvay doesn’t mean that we have come anywhere close to achieving equality. These examples of women in powerful positions remain the exception.”

A citizen of the world
Thanks to the scholarships she received in Morocco and France, Kadri was afforded the opportunity to cross the Mediterranean to pursue her third-level education, studying math before going on to specialize in chemistry. Her academic path took her to Canada before returning to Europe to earn a PhD in macromolecular physical chemistry in 1997.

The 52 year old has added many strings to her bow during her 25 year professional career, becoming a skilled strategist and champion of digital activities in sectors as diverse as automobiles, petroleum, mining, water desalination and construction.

Reacting to her appointment at Solvay, one company director outlined the task facing Kadri, “She arrives at a time when our industry has passed the height of a cycle and is set to endure more challenging times.” Since those words were spoken the pandemic struck, to make the size of the Kadri’s challenge all the more daunting, which is why her performance over the past year is all the more impressive.

True leaders stand up to be counted at times like these and, while Kadri admits to never before having been confronted with a task of this magnitude, she is of the belief that a woman’s perspective and approach are ideally suited to times of crisis.

Out of the nadir of 2020 Solvay’s board are betting on increased digitalization and on the green economy and, knowing Kadri, we can add gender equality to the list.