An authoritarian leader who is as skilled at silencing public opinion as he is at flattering it, Xi Jinping has not hesitated to give priority to political stability over health risks. Even at the risk of the spread of a global pandemic.

Speed of Reaction: While the first cases of the virus were identified as early as December 2019, the Chinese government only publicly acknowledged the healthcare emergency in mid-January. According to documents released by the Associated Press agency, the Chinese national health commission had alerted the government of the dangerousness of the virus as early as January 14th, only a few weeks after the virus had first been detected in Wuhan. From January 14th to January 20th, the government maintained that the virus was not very contagious, before Xi Jinping’s public volte-face on January 20th. The way the government addressed Li Wenliang’s whistle-blowing, a young doctor that tried to raise the alarm on the dangerousness of the virus early on, is yet more evidence that the Chinese people were largely kept in the dark. The Chinese authorities should and could have addressed the crisis much earlier, which would perhaps have contained the pandemic and avoided its global dimension if it had not been for Xi Jinping’s desire to create a utopian “harmonious” society by withholding critical information from the public. Score 1/10.

Economic response: While the Chinese response to the pandemic has primarily been healthcare based, the country has implemented some economic policies, traditionally conservative in light of the economic crisis caused by the virus. On February 15th, the Chinese issued $71.3 billion in loans, later that moth the government also allowed for an exceptional $49.7 billion to be redistributed to SMEs. An additional $17 billion has also been made available in an effort to fight the virus and for export subsidies. On March 30th the government consecutively announced that it would reduce interest rates from 2.4% to 2.2%. Score 5/10

Healthcare response: While the country’s officials had not yet publicly disclosed the appearance of the coronavirus, authorities were already working on an emergency healthcare plan behind the frontlines. Once information on the virus was officially released by an announcement made by leader Xi Jinping on January 20th, the country was able to establish an almost immediate response and make available hundreds of hospital beds within days. On January 23rd Wuhan, the region from where the virus originated, was officially put on lockdown. The country put full efforts in an all-out mobilization for the production of medical equipment: Between February and April, China was able to increase its daily production of masks from 4 to 200 million units and to establish several temporary emergency hospitals and mobile medical spaces within days. The country also invested in developing digital tracing apps to better contain the spread of the virus. Finally, it is perhaps China’s leader’s authoritarian rule that allowed the country to impose and successfully follow lockdown and quarantine measures with such rigor. After the reappearance of six new cases, the government recently announced that it would test more than 10 million people. Score 6/10

Success in saving lives: While the government has put in all efforts to impose a strict lockdown to reduce the spread of the virus, Chinese officials have reported over 80,000 infections and more than 4,000 deaths. These figures and the government’s transparency have however strongly been disputed, after images of deliveries of more than 5000 urns to a single funeral home in the region of Wuhan have emerged. Accordingly, the official death-toll remains uncertain. Score: 6/10

Honesty and truthfulness: As an authoritarian leader vested with absolute power, Xi Jinping is a strategic communicator, as skilled at silencing public opinion as he is at flattering it when it comes to restoring adherence to the system and avoiding anything that could remotely resemble instability.
"Xi Jinping is very good at manipulating the public opinion without appearing to," explains Carine Milcent, a specialist on China and health systems at the French national scientific research centre (CNRS). “He knows how to capture concerns and discontent, reposition himself to appease these and maintain his popularity." Score 9/10 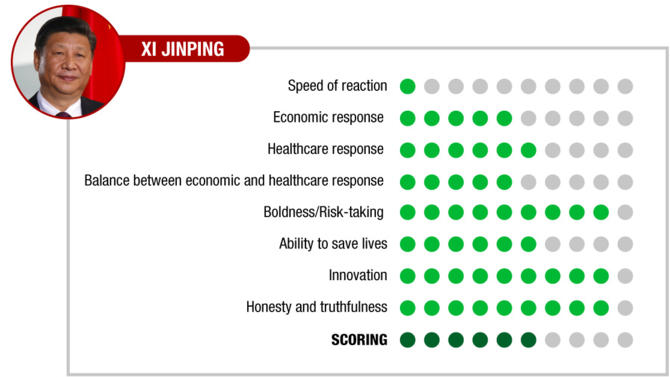