Dr. Li Wenliang was at ground zero of the coronavirus outbreak. He was silenced for trying to alert colleagues about the seriousness of the disease, subsequently contracted Covid-19 from a patient he was treating and died of the illness on February 7th.

Speed of reaction:  No one in China or anywhere else had heard of Covid-19 in December, yet in the city of Wuhan with its 11 million inhabitants, the young doctor was already worried. He noticed the appearance of a new virus among his patients, a form of viral pneumonia resistant to the usual treatments that reminded him of Sars (Severe Acute Respiratory Syndrome). The head of the emergency department at the same hospital, Ai Fen, not only shared his suspicions but had just sent him and other doctors, photos of test results that reinforced his suspicions, which she also shared with the department of infectious disease control. On December 30th, Dr. Wenliang decided to issue an alert by opening up about the situation to seven colleagues via the WeChat network. Score 10/10

Healthcare/social response: While the Wuhan authorities were slow to report cases of the mysterious infection, which delayed measures to contain it, available evidence shows that staff at the hospital where Dr Li worked were alert to the danger, and acted accordingly. In an interview with the New York Times shortly before his death Dr. Li stated, “It was as if Sars had come back. We needed to be ready for it mentally and take protective measures, patients were already being treated under quarantine. When the patient I came in contact with infected her family, and I was infected right afterward, I discovered it was highly contagious. The patient had no symptoms.” Score 10/10

Honesty and truthfulness: The honesty and commitment to public health interests of many doctors and medical staff is exemplified by Li Wenliang. When he sent a message to fellow medics warning of a virus he believed resembled Sars, he was accused by police of “making false comments” and spreading rumors. Wenliang later tragically contracted coronavirus while treating patients in Wuhan and died. His father Li Shuying said: “"I don't think he was rumor-mongering. Hasn't this turned into reality now? My son was wonderful." His death caused widespread anger, with much rage and mistrust directed against the Chinese government. He was described as a “hero who told the truth,” and there have been calls for a statue to be erected in his memory. Score 10/10

Success in saving lives: There is no evidence that Dr Li Wenliang was conducting research into Covid-19 treatments – he was an eye specialist, not a virologist after all – nevertheless, as a symbol of the potent threat the coronavirus carried, his death in February put a human face to the outbreak and showed the world that this disease was not to be taken lightly. Had he not been silenced by the Chinese authorities, it’s likely thousands more lives in the Middle Kingdom, and elsewhere, would have been saved. Score 10/10

Boldness/Risk-taking: In a country where "good news is spread and bad news stays hidden," the bravery of Dr Li in openly discussing the virus on WeChat was indeed significant. He would have been aware that he risked censure for trying to get the word out, and that is indeed what happened. Equally brave was returning to work to treat coronavirus victims after he became aware of its deadly nature and, as we all know, he paid the ultimate price for his selflessness. Score 10/10 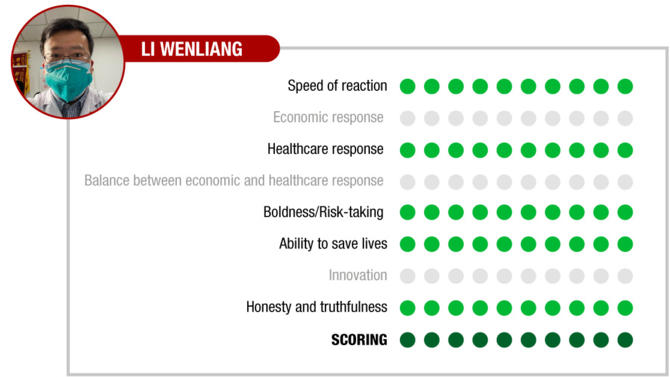