Treating and caring for the more than 2.5 million people around the world who have reportedly contracted the coronavirus to date, doctors and medical staff are the bravest of the brave.

Speed of reaction: While the number of Covid-19 cases around the world are frequently reported, what this tends to overshadow is the reported number of people who have recovered from the virus – as of April 21st, this number stood at more than 687,000. The fact they survived will, in the overwhelming majority of cases, be a testament to the skill and bravery of doctors and medical staff around the world. These are the people on the front line of the global pandemic and many have paid a heavy price. For example, the number of healthcare workers who have tested positive for the coronavirus in the US is probably far higher than the reported tally of 9,200, according to reports. Meanwhile, in the UK more than 100 health workers have died from the coronavirus, figures show. At least 3,400 health workers in China have contracted the coronavirus. While in Italy, more than 2,600 health workers have suffered from the effects of Covid-19. It is estimated that 14 per cent of the people who have contracted the coronavirus in Spain are health workers. The fact that so many people working in the sector have been affected gives a clear indication of the extent to which they are putting their health, and even their lives at risk, to help others. As the “first responders”, they have been, by definition, the quickest to react during the pandemic. In the US, such has been the demand for ambulances due to patients require emergency admissions to hospital, ambulance response times have increased by up to 70 per cent during the pandemic. Score 10/10

Healthcare/social response: When analysing the 687,000 cases in which people have contracted coronavirus and recovered, data on worldometers.com shows that, of cases that had been closed by April 21st, in Germany 95 per cent of people recovered, while in the US, 65 per cent have recovered. For other countries, the recovery rate in closed cases is as follows: Spain (79 per cent), China (94 per cent), Italy (68 per cent), and France (65 per cent). It should be noted that no figures for recoveries in the UK are available, which highlights the massive discrepancies in the ways in which different countries are reporting cases. A number of countries, for example, have been accused of downplaying the extent of the outbreak within their borders. Similarly, there have been many reported deaths in care homes for the elderly – while it is suspected that the a significant number of the fatalities have been coronavirus-related, the lack of testing means that true numbers remain unconfirmed. The high number of recoveries in Germany is thought to be attributable, at least partly, to a high number of hospital beds and intensive care unit beds.

The ability of doctors and medical staff to treat, and save, coronavirus patients has been massively impeded by a dearth of essential medical equipment. For example, New York has been heavily dependent on a shipment of 1,000 ventilators that was sent by China, while Germany devised a plan to send one million facemasks to Italy. Meanwhile, the Czech Republic made an offer of 10,000 protective suits for medical staff in Italy and another 10,000 for medical staff in Spain. Score 8/10

Innovation: Such an innovative disease has demanded innovative responses from medical teams. There have been reports of medical staff asking patients to describe their Covid-19 experiences in minute detail, simply because they have no idea what they are dealing with. There have been reports of doctors, for example, overriding rules about not performing bronchoscopies (which could potentially aerosolize the virus) on coronavirus patients in order to save lives. As medical staff enter unchartered territory, quick-thinking innovations can literally be the difference between life and death. There have also been reports of doctors working with engineers to design makeshift ventilators. Score 9/10

Honesty and truthfulness: The honesty and commitment to public health interests of many doctors and medical staff is exemplified by the sad tale of the Chinese doctor Li Wenliang. In December he sent a message to fellow medics warning of a virus he believed resembled Sars, another deadly coronavirus. However, after issuing the warnings, he was accused by police of “making false comments” and spreading rumours. Wenliang later tragically contracted coronavirus while treating patients in Wuhan and died. His father Li Shuying said: “"I don't think he was rumor-mongering. Hasn't this turned into reality now? My son was wonderful." His death caused widespread anger, with much rage and mistrust directed against the Chinese government. He was described as a “hero who told the truth”, and there have been calls for a statue to be erected in his memory. Score 10/10

Boldness/Risk-taking: Few have taken bigger risks than doctors and medical staff during the coronavirus pandemic. With many having to struggle through with insufficient medical equipment, they have put their health and lives on the line time and time again to save others. Many have played the ultimate price for their heroism. Score 10/10

Success in saving lives: Doctors and medical staff have been instrumental in the battle to preserve life curing the pandemic. While many people around the world have sadly died, this has been due to poorly funded, and resourced, health services rather than any inadequacies on the part of the medical staff involved. Given the scale of the outbreak, it is unlikely that everyone could have been saved, but large numbers of people certainly could have been. Politicians guilty of years, and often decades, of chronic underinvestment in public health services should hang their heads in shame. It is important to note that, despite all these disadvantages, many medical staff have successful saved hundreds of thousands of lives. As of April 22nd, of the 864,000 closed cases around the world, 80 per cent saw people recover. Score 8/10 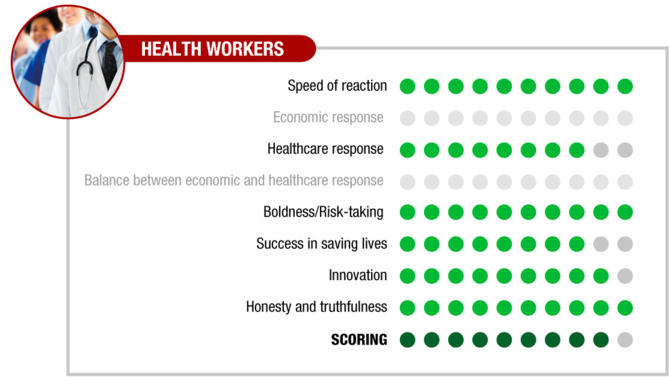