According to Danone's CEO, the pandemic is a test of our collective ability to live and work together. Leader’s League puts his pandemic performance to the test.

Speed of reaction: Only ten days after the lockdown began, Faber announced that he would guarantee the jobs, salaries and employment contracts worldwide for the next three months. He deemed it essential to "reassure employees in order for them to assume the burden of meeting the needs of the population." In France, the group has committed to compensate employees who are partially employed and to pay a bonus of €1,000 to those who are compelled to work on site. Score 10/10

Economic response: Whetherit be service providers, farmers or independent distributors, the dairy giant has not left anyone behind. Emmanuel Faber promised these 15,000 companies a €250 million support package to emphasize that the world to come would not be possible without joining forces. The renewal of partnerships involves not only cash advances, but above all the formation of innovative coalitions between all stakeholders. Score 6/10

Innovation: The CEO of the Danone group did not wait around for the next crisis to hit rethink tomorrow's world in order to fulfill his "utopian duty" and exercise his "right to pragmatism". His trademark involves the use of back-roads. He graduated from HEC, and is a fighter against the reign of money. He is a hard worker by trade, but engages in personal projects for several weeks a year. He is a manager but also differently minded. Some like to call him the "monk-soldier". He is ambitious, but at the same time he advocates a humanistic approach to business. He seeks to reconcile between the economic and the social aspects, which is clearly a Chinese puzzle when running a multinational company. Score 9/10

Honesty and truthfulness: In 2017, the French multinational company unveiled its very first brand signature "One Planet, One Health" with the aim of inspiring change. One of the group's objectives for 2030 is to be B Corp certified which currently concerns seventeen of its entities, representing more than 30% of its worldwide turnover. Emmanuel Faber has been accused by some of green washing and by others of turning Danone into an NGO. For several years now, he has been advocating healthier food that is more respectful of people and the environment. Score 10/10

Boldness/risk-taking: Rather than prioritizing the cost of exceptional measures, Emmanuel Faber joined the "10% to change everything" collective to hasten the shift from competition to collaboration. His name also figures among the personalities who, following the initiative of Pascal Canfin, launched a call to mobilize in favor of a green recovery plan so as not to repeat the mistakes made after the financial crisis of 2008. Time will tell whether or not the growth recorded by Danone during the confinement period is confirmed. But the crisis is already revealing "that the world will not be changed if today's leaders do not fulfill this utopian duty." Score 8/10 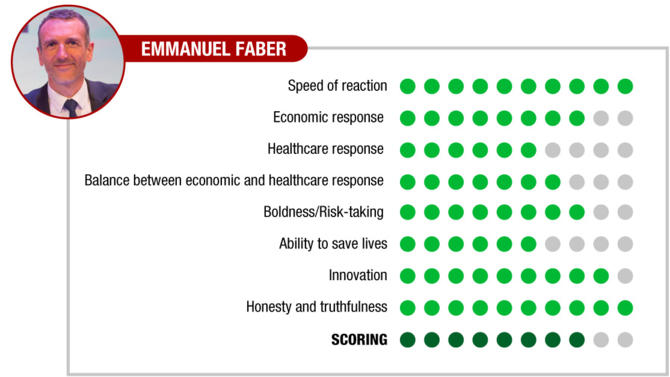