The most powerful man in the US has plunged his populace into not just mortal danger but chaos. We look at how.

Speed of reaction: If Brazilian leader Jair Bolsonaro were to get 1/10, Trump is admittedly a cut above – but the US’s high death toll is due in large part to his procrastination and his taking weeks to acknowledge the pandemic’s severity. Score 2/10

Economic response: Behind the sheer size of the $2.2 trillion stimulus, there is little to take succour in. One-time $1,200 paycheques, delivered well after 3.3 million Americans had filed for unemployment benefits, are clearly insufficient to live on for months at a time, especially when many of those cheques have taken weeks to arrive. Trump’s removal of Glenn Fine, the independent overseer of proper allocation of much of the $2.2 trillion, was a dark herald of the president’s propensity for evading scrutiny. Trump has also voiced his support for aid for cruise lines, though fortunately the major cruise companies have been left out of the stimulus package because they are registered abroad for tax reasons. Most states have taken action to protect renters from eviction – but almost 1 in 4 states haven’t, with the already limited CARES Act being flouted by numerous landlords, leading to well over 100 evictions already. Score 4/10

Healthcare response: Again, 1/10 is reserved for Bolsonaro, with countries such as Sweden that have persisted with herd immunity in the face of enormous death tolls scoring 2/10. Nonetheless, the US has performed poorly compared to its neighbors and the rest of the world, especially considering it’s the world’s wealthiest nation. A country most of whose principles are founded on individualism is almost inherently ill-equipped to deal with nationwide crises that require strong state intervention. Score 3/10

Innovation: The US is indisputably a global hub of innovation, and Trump has already signed a $456 million deal with Johnson & Johnson for a potential coronavirus vaccine – perhaps prematurely, since the drug wasn’t even in clinical trials at the time. Nonetheless, US pharma giant Gilead Sciences’s drug remdesivir has been widely noted as having had promising results in animal trials; so far the US has been one of very few countries to be administering it (though its use was suspended in late March for supply reasons). Outside of pharmaceuticals, the US’s response has hardly been innovative – its marshalling of healthcare resources has been as ungainly as one might expect, with significant shortages of personal protective equipment (PPE) for healthcare professionals and ventilators for those in urgent need. Score 5/10

Honesty and truthfulness: As explored at the outset of this article, the coronavirus crisis did not make an honest man of Donald J. Trump – and so, when all is said and done, 1/10 seems as accurate an assessment of his honesty as ever. An analysis by the Washington Post concluded that in Trump’s first three years as president, he made 16,241 false or misleading claims. That’s almost 15 false or misleading claims every day, 365 days a year. Score 1/10

Boldness and risk-taking: Trump loves taking risks; unfortunately for the American people, he has a history of taking the wrong ones. America has long suffered for its exceptionalism, and with Trump’s personal sense of exceptionalism thrown into the mix, the combination is literally lethal. Certainly the USA’s hypocrisy is bold: it purchased ventilators from a Russian company it had blacklisted, while aggressively withholding ventilators and other medical supplies from countries it’s trying to pressure into regime change, such as Cuba and Nicaragua. Score 3/10

Success in saving lives: The countless healthcare professionals valiantly battling the virus have been let down by their president, who – along with the country’s deeply conservative media – is squarely to blame for downplaying the virus when it mattered most. 41,000 deaths in the world’s richest country is deeply shameful. Score 2/10 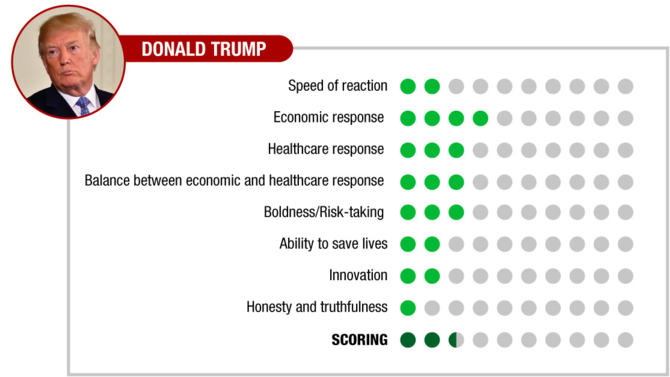 Positive result for fund industry in Luxembourg despite COVID 19 crisis.

Belgian company IDtech has been sold to private investors in a leveraged management buy-In.

Kellerhals Carrard and Bratschi have each opened a seventh office in Switzerland.