Covid-19 has meant a baptism of fire for the new president of the European Central Bank. After a shaky start she has rebounded to stress the lengths that the ECB will go to to safeguard the European economy.

Speed of reaction: After an initial series of measures that went almost unnoticed following a PR snafu, Christine Lagarde succeeded in drawing up a tailor-made financial measure that was capable of reassuring banks and governments and, thus, stabilize the European economy in a period of unprecedented turbulence. A masterstroke that elevates the president of the ECB to the rank of key player in the fight against the pandemic and its devastating economic and financial effects.
However, when Lagarde first addressed the European people with the ECB’s Covid-19 rescue plan on March 12th, her response was far from the reassuring. After Lagarde’s speech the European stock exchange, already witnessing spiralling devaluation, was said to have lost an additional 4%. At the root of the problem was the perception that she was suggesting the bulk of the crisis management responses would be the responsibility of EU member states and not the ECB. Criticism quickly began to pour in. Coming under heavy fire, Lagarde reacted without delay, giving an interview later that same day in which she first tried to correct the misunderstanding - reassuring that the ECB would not remain unmoved by the situation and that it would adapt its interventions to the current context and use all the flexibility at its disposal to do so. Six days later the ECB announced its Pandemic Emergency Purchase Programme (PEPP). Score 6/10

Economic response: With the PEPP, the central bank has just issued €750 billion for European businesses and governments. In addition to the measures previously announced, a total of €1 trillion has been earmarked over the current year for the repurchase of private and public debt. Many view the PEPP as an historic decision, not only because of the amount - which could potentially be further increased - but also because of its operating procedures which have been extended to non-financial businesses and the temporary relaxation of credit risk criteria it offers to economically struggling member states, such as Greece. The scheme further introduced temporary collateral easing measures, allowing for more loans to SMEs, and the easing of certain capital ratio and liquidity requirements, so as not to deprive the economy of liquidity during the crisis. As a result, bond markets have started to stabilize and European stock prices have also begun to rise again. Score 8/10

Innovation: While Lagarde’s response to the pandemic was off to a rocky start with her strongly- criticized speech on March 12th, the president of the ECB has received plaudits for the historic €750 billion rescue plan. Mario Draghi, Lagarde’s predecessor, had made use of the same type of emergency measures to safeguard the European economy, during the monetary crisis of 2012 and had declared that the ECB would do whatever it takes to calm the markets and save the single currency. A "whatever it takes" approach that Christine Lagarde managed to make her own in just a few days, silencing those who, despite her background and experience, continued to see in her, if not as a casting error, at least as someone unfamiliar with the institution - she is the first to take over the presidency of the ECB while having no training as an economist, making her as unfamiliar with financial crisis management as she is with the world of central banks. For the former IMF director, there is no doubt that the pandemic has revealed her to be a skilled crisis manager. Score 8/10

Honesty and truthfulness: Communication has always been one of Lagarde’s strongest suites. That was until her faux pas of March 12th. “We are not here to close spreads,” Lagarde had said during her speech, referring to the difference between the rate on German bonds, which are considered to be the safest, and that of other debt-ridden eurozone member states, such as Italy. The spread between Italian and German debt has widened from 1.6% to 2.6% in just a few days, as a result of the hard-hitting economic impact of the pandemic. “There are other tools for that and other actors to deal with those issues,” Lagarde added, implicitly addressing national governments. While her comments earned significant criticism, they could not have been more honest. While Ursula von der Leyen, president of the European Commission (EC), has continuously and actively been giving updates on the latest developments of the pandemic, Lagarde more interested in working behind the scenes, has been less engaged publicly, excluding her March 12th speech. Score 7/10

Boldness/Risk-taking: The ECB’s PEPP was introduced a week after Lagarde’s first speech, which had announced a €120 billion asset-purchasing scheme, following an emergency conference of the bank’s 25-member governing council, to address the criticism that the ECB’s measures were insufficient. While they were a long time coming, the current rescue measures included in the PEPP have proven that the ECB is capable of supporting Europe as strongly as it had during the financial crisis of 2008.  Score 6/10 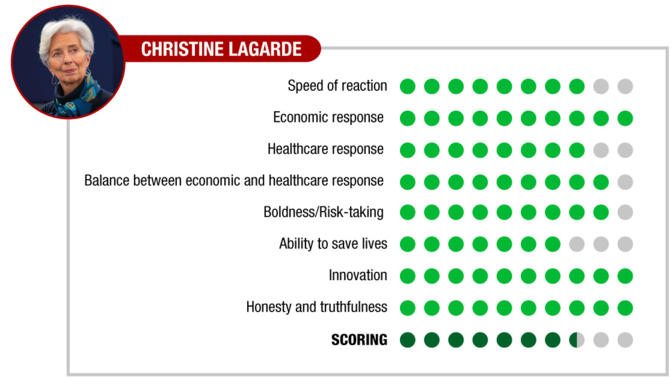