She steered her country and continent through the devastating financial crisis of 2008, now in the twilight of her political career Angela Merkel has returned to prominence, leading Germany’s response to the Covid-19 pandemic.

On January 17th, shortly before the coronavirus crisis engulfed Europe’s economic powerhouse and its neighbors, Germany announced the launch of a Covid-19 detection test, the world’s first ultra-rapid detection tests, capable of giving results within two and a half hours. Ten days later, when the first case of Covid-19 was reported in the country, Germany was prepared.

On the same day, a massive screening program was set up to identify infected individuals and asymptotic carriers. Increased surveillance of anyone who had been in direct contact with the infected was mandated. By mid-April Germany reported testing 300,000 to 500,000 people a week, a higher level of testing than anywhere else in the world. From the first week of the crisis on, both the public and private health services were mobilized. In February and March, the number of cases skyrocketed, with the majority of cases concentrated in Rhine-Westphalia, Bavaria and Baden-Württemberg, the country’s main economic hubs.

Early on in the crisis, Angela Merkel brought together a brain-trust scientific and other experts. While Merkel was the one announcing most major measures, these are previously discussed and validated by all 16 Länder, which are the sole decision-makers and are at liberty to lay down their own rules, especially in terms of crisis management. On March 22nd, lockdown measures were announced, but the extent to which each Länder complied with these rules remained their discretion. Accordingly, only the three most affected Länder decided to follow total lockdown measures. While the measures taken in Germany seem relatively loose compared to the ones taken in neighboring countries, such as France or Italy, the preventive testing measures were taken very early on and have allowed the country to react in a timely and efficient manner. Score 10/10

In early April the European Council met and decided on an emergency plan for the entire eurozone, to the tune of €540 billion. The plan is built on three key mechanisms, in particular the European Stability Mechanism (ESM), a fund dating back to the financial crisis of 2008. The historic emergency scheme aims to respond to the needs of states, businesses and workers. While the chancellor affirmed that Germany should prepare to contribute to the EU budget in a different way and at higher levels, European countries continue to disagree, and there is a recurring debate over the debt contracted by countries most in need in the face of the ongoing crisis, with the case of Italy being a notable stumbling block.

As European countries discussed a rescue package comparable to the Marshall Plan of 1945, Merkel stressed that any such plan should distribute funds in a spirit of solidarity but with a limited duration. With the all too predictable rankling over the contribution of each member state to the rescue package, it remains on the drawing board. Indeed, Germany, along with the Netherlands and Austria, is opposed to mutualization of debt and the use of the so-called corona-bonds, much to the chagrin of southern European countries. Problems which arose in the aftermath of the eurozone crisis, namely friction between frugal northern countries and profligate southern ones, seem to be resurfacing in the current pandemic.

On the home front, the German government called on any company that could transfer its production units to manufacture medical equipment to immediately do so, in light of the country’s medical equipment shortage (masks and scrubs), announcing financial compensation in return. With full lockdowns only implemented in the most affected regions, other Lander have been able to carry on with their economic lives, albeit at a reduced level, thus avoiding a total halt to the country’s economy. Germany has had a budget surplus for eight consecutive years, but the government has just announced the possibility of taking out a loan, as the country copes with the impact of the upcoming global recession. According to experts, a 10% to 12% drop in GDP in 2020 is likely. Score: 8/10

The German public health system is considered to be one of the most efficient in the world. Its ability to cope with the current pandemic confirms this. Before the crisis, there were calls to reduce the country's 497,000 hospital beds, which Angela Merkel has never been in favor of, fortunately as it turned out, since hospital capacity has proven to be a vital cog in the countries coronavirus defense mechanism.

As of early February, Germany had 28,000 intensive care beds available (25,000 of which were equipped with respiratory assistance), making it one of the best-equipped states in the world (6 beds per 1,000 inhabitants). By early April, the intensive care capacity had risen to 40,000 beds, 30,000 of which were equipped with ventilators. The fact that two of the world's leading ventilator manufacturers, Draeger and Löwenstein, are based in German enabled the country to up capacity in record time. At the beginning of March, Merkel introduced a policy of financial support for hospitals, granting €560 for each non-emergency surgical operation postponed, to free up beds for Covid-19 patients.

Throughout this period, Angel Merkel was working behind the scenes, continuously taking advice from her inner circle and ushering to the forefront several of her ministers and scientific experts such as her young and dynamic minister of health, Jens Spahn. Nevertheless, certain weaknesses of the German hospital system have to be pointed out. Some 17,000 nursing positions remained unfilled and several large hospitals have had to call on the help of medical students or retired medical staff. The onset of the crisis also saw the departure of the vast majority of the 200,000 Polish, Ukrainian and Baltic homecare workers. Score: 9/10

Germany is a leaders among OECD nations in terms of research spending, contributing more than €90 billion per year. This long-term support policy, which Angela Merkel has championed during her four terms in office, strengthened the country’s capacity for medical innovation. Germany was the first countries in the world to develop a viable screening test. It was also one of the first to obtain authorization to test a potential Covid-19 vaccine. The announcement was made on April 22nd, with clinical trials set to begin a few weeks later. The country's preeminent position in terms of pharmaceutical innovation and biotechnology suggests a renewed opportunity for the German industry in post-crisis world.

The government has also launched a budget support plan for SMEs and startups involved in the search for innovative solutions and the transformation of small national production units to combat the pandemic. One of the first data-traceability programs, via smartwatch, was launched in Germany at the beginning of April to detect the emergence of new Covid-19 outbreaks. Nevertheless, innovations promoting the use of private data collection for virus-tracing purposes remain problematic to the authorities (Germany is a resolute defender of data privacy and proponent of the GDPR) and much of the general public. Score: 8/10

Balance between economic and healthcare response:

As the strongest European economy and with one of the continents best healthcare systems, Germany has been able to weather the pandemic to a much more successful degree than any other major European nation. ‘Mutti’ has once again proven to be an efficient leader in times of crisis. Taking measures both on the economic and healthcare fronts, Germany stands head and shoulders above its European neighbors in terms of crisis management in this emergency. Score: 8/10

Angela Merkel speaks simply and clearly. Usually not very prolific in her statements, she only intervenes to make major announcements. On March 18th, she held her first televised address to the nation in eight years, warning of the seriousness of the crisis to come: "The crisis is serious, we have to take it seriously […] we have little room for manoeuvre," she explained, stressing “No, this pandemic is not a war,” striking a more measured tone than French President Emmanuel Macron in his address to the nation around that time.

Her political vigor throughout the crisis has boosted her popularity in Germany. Early April, a poll conducted by ZDF channel announced that 89% of Germans considered the government's crisis management to be positive. The same poll reported a 7% increase in the CDU’s popularity. Opinion is unanimous: "There is no doubt that the country knows who is in charge," a commentator wrote.

The chancellor's humility is another strong point, whether it is in referring to the impact of the decisions taken on the private lives of her fellow citizens - she admitted that it was difficult for her to take the decision to impose travel restrictions - or in clearly naming the challenges raised by this crisis. "Not since the reunification of Germany have we had to face such a challenge, and our collective and united action now is what matters most," she said.

Merkel made sure to lead by example; having herself come into contact with an infected person, she did not hesitate to quarantine herself for two weeks. She continued to fulfil her role as chancellor from home, participating in all crisis management meetings by video-conference. Throughout the crisis, the chancellor has not flip-flopped or made statements that have subsequently been picked apart. Additionally, her rigor, her constant reminder to the German people of the importance of consensus, the party line laid down and shared by all the members of her government, have bolstered the confidence the German nation has in their long-time leader. Score: 8/10

Germany is known for its pronounced aversion to risk. In this case, the major health crisis is the risk. The country has responded to it methodically and rigorously. Angela Merkel embodies this approach to decision-making. If there is a risk to be taken, it is discussed and decided on in consultation with the Länder, ardent defenders of their prerogatives and attentive to the scientific committees set up to manage the crisis.

Unlike elsewhere, testing policy has not been subject to political debate or media grandstanding. Testing is being conducted by recognized laboratories and according to clearly accessible and transparent protocols. The media has put the emphasis on scientific facts rather than political rhetoric. Only a few tabloids have maintained a polemic tone throughout the crisis.

The country’s risk aversion is also illustrated by the refusal to mutualize European debt, as this, Merkel claims, would affect future generations and would not comply with the European budgetary rigor she actively supports. Score: 7.5/10

Along with the US, Spain, Italy and France, Germany has been one of the countries most affected by the pandemic, yet among these nations it has the lowest mortality rate. As of April 23rd, there were 148,046 reported cases and only 5,094 deaths directly related to Covid-19. The country has had a Covid-19 reproduction rate of 0.7R since the second week of April, which means that, on average, an infected individual infects less than one person.

Moreover, the country has never reached its intensive care capacity limit and has even been in a position to make beds available for patients from neighboring countries. For the time being, the balance sheet remains impressive: the German health system has managed to contain the health crisis. Overall, the series of measures implemented at the federal level and agreed with the Länder have so far made it possible to limit the number of deaths. Yet, Angela Markel cautiously warns that success remains fragile. Score: 9/10 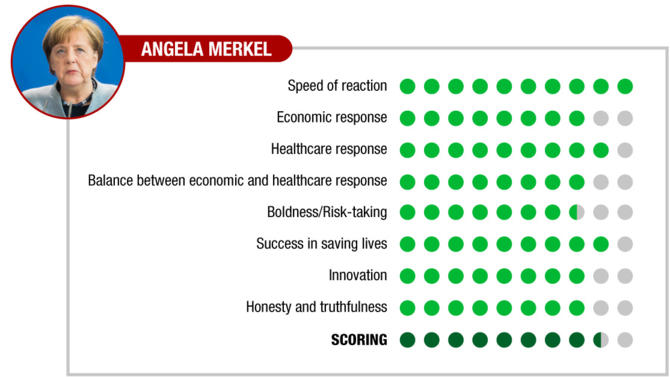