With a confirmed death toll of over 24,000 and approximately 20,000 new confirmed cases per day, Brazil is emerging as the new global hotspot for the coronavirus pandemic. We assess how President Jair Bolsonaro’s federal government has responded to the ongoing sanitary crisis in Brazil.

Speed of reaction: On March 18th, with Brazil already registering 428 confirmed cases of Covid-19, Mr. Bolsonaro referred to the novel coronavirus as ‘a little flu’ and, a few days earlier, could be seen shaking hands with supporters outside of the presidential palace, blatantly ignoring social distancing recommendations. This irresponsible behavior – of which there is a long list – has typified Mr. Bolsonaro’s response to the coronavirus crisis, both as an individual and as president. From the outset, he has fervently campaigned against social distancing measures with his federal government launching a ‘#BrazilCannotStop’ advertising campaign in late March to encourage the reopening of schools and sending Brazilians back to work. As recently as mid-May, Mr. Bolsonaro stated: “If it was up to me, almost nothing would be closed.” With a few exceptions, the majority of Brazil’s 27 state governors have ignored Mr. Bolsonaro and intervened by imposing state-wide social distancing measures to avoid the collapse of Brazil’s Unified Health System (SUS) within their states and save as many lives as possible. João Doria, governor of São Paulo, Brazil’s wealthiest state, recently stated: “Most governors will maintain social isolation. We believe in science and medicine. This is exactly the opposite of what Brazilian president Jair Bolsonaro recommends.” Although intervention at state-level has helped to curb the proliferation of cases, Alexandre Kalache, a former senior World Health Organization official, recently predicted that, based on current numbers, Brazil will reach 120,000 casualties and, in a matter of weeks, will rival the United States as the country with the highest number of deaths worldwide. In Brazil, at a federal level, there has been no significant response to the pandemic Score 0/10

Economic response: The lack of a coherent federal policy as well as the successive political crises triggered by President Bolsonaro – three key ministers have exited his cabinet in under one month -  have led the Brazilian Real, which has lost 45% of its value relative to the United States dollar, to be the worst performing currency in the world in 2020, with respected Swiss bank, Credit Suisse, rating the Brazilian currency as ‘toxic’. This acute devaluation of the real coupled with the start of the pandemic led a group of 112 public Brazilian companies to post, on May 15th, a R$21 billion loss for the first quarter of this year, when in the same period in 2019 they had seen a profit of R$11.7 billion. The lack of coordination between the municipal, state and federal governments – a direct result of Mr. Bolsonaro’s anti-social distancing philosophy – as well as the ministerial merry-go-round within the federal government has prompted strong criticism from well-known entrepreneurs such as Philipp Schiemer, president of Mercedes-Benz Latin America, who recently stated: “In a few months, Brazil has lost the credibility it had won with its labor and social security reforms. What we are seeing is very sad.” Consultancy firm Alvarez & Marsal (A&M) predicts the situation for Brazil’s companies will only get worse, according to its estimates a record 2,100 to 2,500 companies will file for bankruptcy protection in the country, shattering the previous record of 1,872 filings at the height of Brazil’s economic crisis in 2016. In terms of poverty alleviation, one positive measure has been the approval, in late March, of a three-month R$98.2 billion emergency income scheme – which has since risen to R$151.5 billion – which guarantees an income of R$600 for economically vulnerable Brazilians, with around 80 million individuals currently benefiting from the program. Moreover, on May 6th, the Brazilian senate approved a bill which will grant R$125 billion to states and municipalities in light of the pandemic. Although both measures require presidential sanction, it is worth noting they were not idealized by the federal government. Lastly, Economy Minister Paulo Guedes recently announced the federal government together with a group of private domestic banks will inject R$6 billion into the country’s aviation sector to help them get through the coronavirus crisis. Score 3/10

Healthcare response: Even as the national health crisis deepens, Mr. Bolsonaro’s government recently ousted not one, but two health ministers in under 30 days, in the shape of pediatric orthopedist Luis Henrique Mandetta and oncologist Nelson Teich, respectively. Although both ministers offered their own resignations, their hands were forced by Mr. Bolsonaro’s staunchly anti-scientific public policies, such as calling for the end to social distancing and touting hydroxychloroquine, an anti-malarial with serious side effects which both former ministers refused to back due to a lack of scientific evidence. Gonzalo Vecina Neto, the former head of Brazil’s health regulator, Anvisa, recently said of using the drug to treat Covid-19: "There is no scientific evidence and [it is] unbelievable that in the 21st century, we are living off magical thinking.” Another cause for concern is the so-called ‘data blackout’ as, according to data portal Statista, Brazil has only conducted 3,462 tests per one million citizens compared to 37,188 tests in the United States and 64,977 tests in Spain, leading to massive subnotification in the country. According to the team led by Professor Domingo Alves, head of the health intelligence laboratory of the Faculty of Medicine in Ribeirão Preto, linked to the renowned Universidade de São Paulo (USP), the real number of cases in Brazil could be around 1,657,800 (varying between 1,345,034 and 2,021,177).  Mr. Alves concluded: “Even if subnotification exists in the United States, the real number of cases there could reach but not overtake those of Brazil.” Brazil’s saving grace has been its unified health system, the largest by number of patients in the world, however, the federal government’s successive ministerial replacements have certainly done nothing to help. Score 0/10

Innovation: Brazil’s ministry of science, technology, innovation and communications recently launched two public notices inviting bids for projects to develop coronavirus-fighting technology such as tests, medical devices, vaccines and medicine. However, according to researchers at IPEA (the Institute for Applied Economic Research), the resources invested by the federal government come up short when compared to other countries. Whilst Brazil has made approximately 1.8% of its annual research and innovation budget available, the United States has invested 4%, the United Kingdom 11% and Germany, 12%. Economist Fernanda De Negri, one of the research’s authors, predicted: “Of course Brazil does not have the resources to match these country’s efforts, but its isolation is worrying. The day a vaccine for the coronavirus is discovered, we will probably be at the end of the line for immunization.” Another source of criticism has been the federal government’s lack of urgency – both public notices indicate projects will have up to two years with which to present results, over twice the time allowed for in other countries studied by the group. Score 3/10

Honesty and truthfulness: With Brazil’s death toll at over 24,000 and rapidly rising, it is worth remembering that throughout the pandemic Mr. Bolsonaro has repeatedly shrugged off the crisis as “more of a fantasy”, “overblown” and belittled it as “a little flu” in official addresses. On April 12th, with the number of casualties at 1,223 – 19,000 Brazilians were to die over the next four weeks – to encourage citizens to return to work, President Bolsonaro stated, without any scientific backing, that the pandemic was “beginning to go away” and that unemployment was becoming the real problem. If Mr. Bolsonaro’s anti-scientific statements were not enough, he has aggressively pushed for hydroxychloroquine to become Brazil’s official silver bullet in the fight against the coronavirus, despite both Anvisa and the federal council of medecine (CFM) not recommending the drug. In veiled criticism, Michael Ryan, executive director of the emergency health program at the WHO categorically stated: “At this stage, neither chloroquine nor hydroxychloroquine have been effective in the treatment of Covid-19 or in the prophylaxis against coming down with the disease" before adding: “And in fact, the opposite, warnings have been issued by many authorities regarding the potential side effects of the drug.” Both in terms of leading by example as well as public policies, Mr. Bolsonaro’s federal government has been, by all measures, an abject failure.  Score 0/10

Boldness/risk-taking: President Bolsonaro’s notorious disregard for social distancing measures, radical drive for the nationwide use of a potentially harmful anti-malaria drug – not backed by any leading medical or scientific organization – and successive attempts to unilaterally kickstart the economy back to life via a series of presidential decrees, all overruled by Brazil’s supreme court (STF), proves Mr. Bolsonaro is an incorrigible gambler. To Mr. Bolsonaro, it appears casino chips and lives are one and the same – the tragedy is he and Brazilians are losing big-time with Brazil registering a record 1,188 deaths on May 21st alone, a new national record and the second-highest daily death count anywhere in the world. Score 2/10

Success in saving lives: According to research by Columbia University, 83% of deaths in the United States – or 54,000 casualties – could have been prevented if American cities had begun locking down on March 1st. With the death toll in Brazil doubling from around 10,000 to 20,000 in just 12 mid-May days, had Mr. Bolsonaro’s anti-social distancing measures been observed and the re-opening of the economy prioritized, Brazil’s situation would surely be significantly worse, thus credit must go to the state governors who defied him. As for the federal government, successive substitutions at the ministry of health along with a manic presidential drive for a problematic drug to become Brazil’s national response to the pandemic have done little to help with life saving. With Brazil set to overtake Russia in the coming days and become the country with the second most confirmed Covid-19 cases in the world, Mr. Bolsonaro has appointed Eduardo Pazuello, an army general with no medical experience, as his new minister of health. In recent days, Mr. Pazuello has already appointed 21 army officials with no medical background to senior management and technical roles within the health ministry. Amidst the worst pandemic in a century, as the death toll continues to soar in Brazil, the federal government has given the ministry of health’s keys to medically illiterate professionals. Unfortunately, it seems the tragedy is only starting in Brazil. Score 0/10 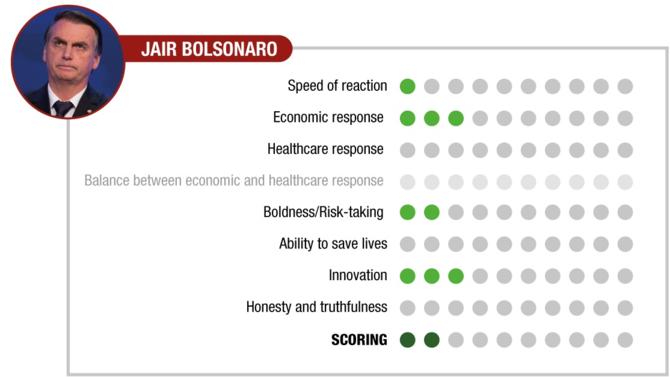 14 July: Your round-up of the issues leading today's agenda

13 July: Find out what's been happening in Latin America with our latest news update.

13 July: Your round-up of the issues leading today's agenda

10 July: Find out what's been happening in Latin America with our latest news update.

10 July: Your round-up of the issues leading today's agenda

Leaders League identifies those lawyers expected to be at the forefront of the technology sector in Portugal in the comi...

9 July: Your round-up of the issues leading today's agenda

9 July: Find out what's been happening in Latin America with our latest news update.