President Moon was just re-elected in a landslide victory. We assess how he and his health minister have adroitly navigated the coronavirus crisis.

Speed of reaction: President Moon Jae-in’s decision to not immediately impose a travel ban on China – he has historically been emollient with the superpower, South Korea’s largest trading partner – has come in for criticism. “China’s difficulties are our difficulties,” he intoned on 20 February, with unintentional irony: South Korea’s coronavirus case numbers were doubling as he spoke. Nonetheless, South Korea’s rapid testing programme has rightly made headlines around the world, with innovative tests that release results within six hours. It implemented this programme quickly and on a mass scale, so that by the end of February over 46,000 South Koreans had undergone affordable, often free, tests. At this point, the US, which also recorded its first coronavirus patient on 20 January, had only tested 426 Americans. By mid-March, 270,000 South Koreans had been tested. Mass testing meant that those who were known to have it could be traced locationally (in a process known as “contact tracing”), so those they were interacting with could be warned, tested and, if necessary, quarantined. From 1 April, a two-week quarantine has been mandatory for Koreans and non-Koreans entering the country from abroad, in an attempt to stave off the second and third waves of coronavirus that afflicted Singapore. As a result, only 240 people have died – and there has been no lockdown. Meanwhile, South Korea has exported test kits to over 20 countries, including the US. Score 8/10

Economic response: As elsewhere in Asia, South Korea has been hit financially by the sheer global scale of the virus: in March, foreign investors sold nearly $10 billion worth of Korean shares – the biggest sell-off for the country since records began over 20 years ago. President Moon unveiled a $9.8 billion package on 3 March for employee retention, retraining and childcare; on 22 April, he announced that the government would be spending around $190 billion in total. (This is all on top of a $4.8 billion stimulus package approved last August to pick the economy up from the doldrums.) The sums here are modest compared to those pledged by the major European governments, given South Korea’s population of 51 million; nonetheless, South Korea has been far less internally impacted by the virus, and is already showing tentative signs of returning to normal. Nonetheless, South Korea is an export-driven economy, and widespread loans to businesses or paycheques to individuals have not been policies, unlike in many other countries around the world. As in Singapore and Hong Kong, many hapless individuals and families have already faced, and will continue to face, eviction. Score 4/10

Healthcare response: Armed with a PhD in social welfare at the University of California, Park Neung-hoo, before becoming South Korea’s minister of health and welfare, helped shape the country’s principal social welfare system, the Basic Livelihood Security Programme, which provides cash, housing and education benefits to 3% of the country’s population. He has been the incumbent health minister since Moon assumed the reins in May 2017; since then, he is most noted for expanding South Korea’s National Health Insurance (NHI) programme, introducing coverage for medical services previously considered non-essential. He has long stressed the importance of universal health coverage and balancing this with data privacy, which helps explain why South Korea has managed to gather so much healthcare data from its citizens while also anonymizing that data. App alerts contain only the gender and age of infected people, and the names of the places they’d visited. Meanwhile, South Korea has exported test kits to over 20 countries, including the US. Score 9/10

Innovation: South Korea’s response necessitated the use of relatively invasive technology among a very trusting populace. Moon’s government used CCTV footage, GPS tracking, phone data and card payment records to track patients’ (or potential patients’) movements and catch quarantine-flouters. The authorities also encouraged companies to develop apps such as Corona 100m, which alerted users when they breached the 100-metre radius of a coronavirus patient. That much of this data is anonymized does not change the fact that such potentially invasive apps are more viable for mass take-up in Asian countries, where trust in governments is higher than in Europe or the Americas. Score 9/10

Honesty and truthfulness: The trust that allows citizens to feel comfortable with using such apps is embedded in the unwritten social contract between citizen and state in South Korea. Indeed, though Moon Jae-in faced a petition signed by 1.5 million people demanding his impeachment because of his conciliatory approach to China as the virus began to spread, his landslide election victory last week bespeaks the extent to which his fellow citizens trust him. Though he would have scored higher if he’d accepted the gravity of the situation even earlier than he did, his language when addressing his people has been plain and fact-based while also appealing to community spirit. South Koreans have been honest with themselves, too: rather than resorting to the desperate self-deceit found in the US and the UK, the South Korean people accepted their plight and approached it pragmatically, thereby reducing its length and severity. Score 8/10

Boldness/risk-taking: Moon and Park score highly for being bold while also taking few risks. True, Moon’s initially relaxed approach to flights from China was doubtless responsible for many of South Korea’s early cases, and he was too blasé about the virus for too long – but as the situation’s gravity dawned on him in February, he managed to mobilise the population effectively and successfully. Not instituting a lockdown seems bold to many in Europe, but that’s because South Korea’s comprehensive testing, contact tracing and information systems meant that the government’s prevention of the virus’s spread was targeted and bespoke rather than indiscriminate. Another potential but scientifically informed risk that could pay off: South Korea’s lifting earlier this week of restrictions on bars, restaurants, shopping centres and religious venues. It’s unlikely that the country will see another major viral wave – though it’s too early to tell if South Korea has beaten Covid-19. Score 8/10

Success in saving lives: Something that has not received enough press attention is the nature of South Korean leadership under coronavirus, which might be said to be radically decentralized: a leadership style in which a population shouldered collective responsibility, mobilized itself and endogenously took control of virus containment. Nonetheless, the people were following a leader they trusted. Tens of thousands of businesses elected to shut themselves down and apply for government grants before it was mandated. Churches began delivering sermons online. The country’s strong social glue stood it in good stead at a time when collective sacrifice was sorely needed. As a result, only 240 people have died – and there has been no lockdown. Score 8/10 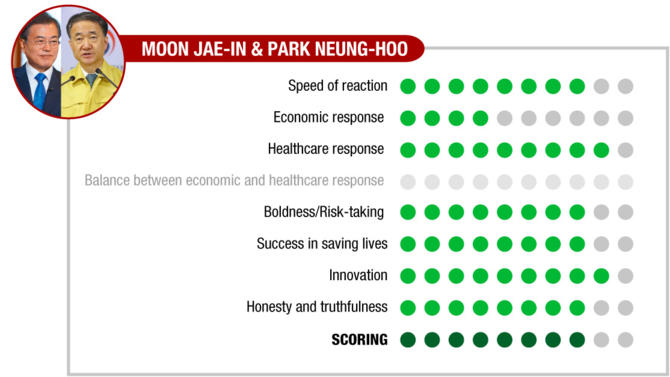 The Gafa have done well out of the lockdown, which has delighted some and worried others.