The founder of the Bill & Melinda Gates Foundation has been ahead of the game when it comes to responding to the pandemic.

Speed of reaction: The Bill & Melinda Gates Foundation is well-versed in global healthcare issues, so, unsurprisingly, Bill Gates’ knowledge and understanding of many coronavirus-related issues is impressive, and he has spoken eloquently on the topic. Consequently, he is a top performer in the ‘speed of reaction’ stakes, with his foundation announcing a $100 million commitment way back on February 6th. Gates had been prepared for this – indeed he had been warning about the potentially devastating impact of a pandemic for a number of years.  On April 15th, The Bill & Melinda Gates Foundation announced a further $150 million to help speed up the development of treatments, vaccines and public health measures to tackle the new coronavirus outbreak. Bill Gates has been a long-term funder of the World Health Organization, providing $367.7 million of the agency’s funding over the last two years. Score 10/10

Economic/social response:  The Bill & Melinda Gates Foundation’s contribution to the effort was entirely focused on healthcare, rather than the economic environment. The priorities included strengthening “detection, isolation and treatment efforts; protect at-risk populations; and develop vaccines, treatments and diagnostics”. However, prior to the outbreak of the coronavirus, the foundation had promoted a number of social and economic initiatives, such as its Financial Services for the Poor (FSP) program, as well as its Family Planning program, which aims to bring access to “high quality contraceptive information, services, and supplies to an additional 120 million women and girls in the poorest countries by 2020 without coercion or discriminations, with the longer-term goal of universal access to voluntary family planning. Score 6/10

Healthcare response: Gates’ focus is overwhelmingly on medicine, vaccination and healthcare. His foundation said it would commit up to $20 million to accelerate the detection, isolation and treatment of people diagnosed with the virus with the goal of interrupting transmission and containing the disease. This funding will be directed to multilateral organizations such as the World Health Organization and the US Centers for Disease Control and Prevention. Support will also be directed to national public health authorities in China and other countries that have reported confirmed cases. National-level partners include the National Health Commission of China and the Chinese Center for Disease Control and Prevention. The foundation has also said it will provide up to $20 million to help public health authorities in sub-Saharan Africa and South Asia to strengthen their emergency operations centers, implement effective disease surveillance efforts and improve their capacity to safely isolate and treat confirmed cases.

The Bill & Melinda Gates Foundation has also said it will commit up to $60 million to accelerate the discovery, development and testing of vaccines, treatments and diagnostics for the coronavirus. Upon announcing the initial tranche of $100 million in funding on February 5th, the foundation said it was going to ‘immediately commit’ the funding. Score 9/10

Innovation: Gates has used his contribution to invest in medical innovators who will look to find vaccines and treatments for a virus that has confounded many medical experts. The Bill & Melinda Gates Foundation has said it will use its R&D funding to help global partners, such as the Coalition for Epidemic Preparedness Innovations, identify and prioritize research needs, address gaps in the R&D landscape, incentivize product development by biotechnology and pharmaceutical companies and ensure that resulting products are safe, effective and made widely available. This effort will include support already underway for Chinese public- and private-sector research partners focused on the discovery, development and testing of candidate vaccines, treatments and diagnostics. Obviously, whether this research is successful remains to be seen. Score 8/10

Balance between economic and healthcare response: The focus has been overwhelmingly on healthcare, with one of the primary objectives of developing a vaccine. In addition, the Bill & Melinda Gates foundation has, for example, said it will provide up to $20 million to help public health authorities in sub-Saharan Africa and South Asia strengthen their emergency operations centers and implement disease surveillance measures, in addition to helping them improve their capacity to safely isolate and treat confirmed cases. However, the foundation has also said it will leverage a portion of its $2.5 billion Strategic Investment Fund, which uses a suite of financial tools to address market failures and incentivize private enterprise to develop affordable and accessible health products. Score 5/10

Honesty and truthfulness: When announcing its donation, the Bill & Melinda Gates Foundation provided a reasonably high level of detail regarding how much funding would be going to which organizations with which objective in mind. Gates’ has long warned of the threat a pandemic could pose to the global population, a warning that seems to have been prophetic He has also spoken out against US President Donald Trump’s decision to halt funding to the WHO. “Halting funding for the World Health Organization during a world health crisis is as dangerous as it sounds. Their work is slowing the spread of Covid-19 and if that work is stopped no other organization can replace them. The world needs the WHO now more than ever.” Score 7/10

Boldness/Risk-taking: Despite his criticism of the US decision to halt funding to the WHO, Gates’ is often viewed as generally conservative with an aversion to being outspoken. Despite question marks about China’s handling of the coronavirus crisis, Gates’ has adopted a strategy of cosying up to the Chinese authorities, evidenced by the fact that some of the funding provided by the Bill & Melinda Gates Foundation to tackle the coronavirus will be directed to national public health authorities in China. National-level partners include the National Health Commission of China and the Chinese Center for Disease Control and Prevention. Score 7/10

Success in saving lives: Potentially phenomenal. In theory, if scientists funded by Bill Gates are able to come up with a Covid-19 vaccine, it could be used the world over. However, no vaccine has yet been found, so this is merely hypothetical. Score 8/10 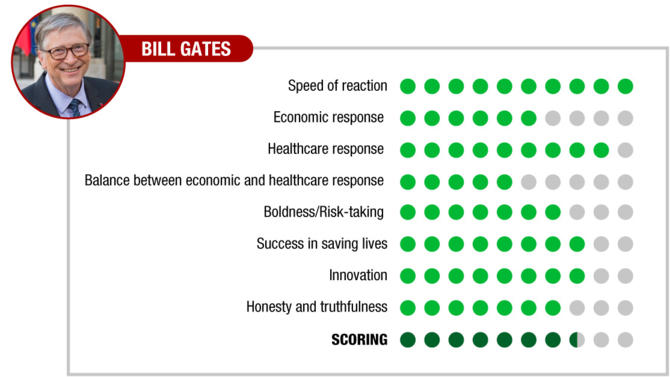