His political career seemingly permanently in the rearview mirror, these days the media baron spends considerable time and money helping save the planet. 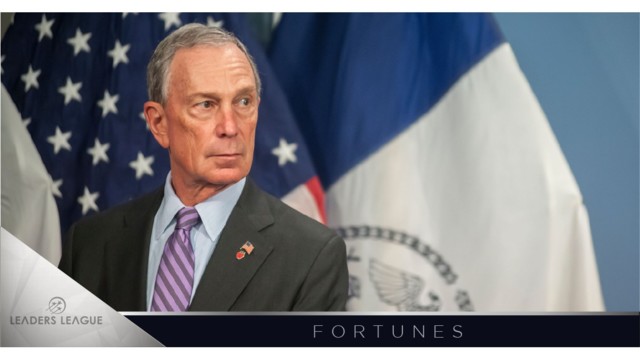 At the recent Cop26 in Glasgow, Michael Bloomberg put his best foot forward. “Our new goal is to close a quarter of the world’s existing plants by 2025 and cancel all [519] proposed coal plants as well. American cities are going to cut down on emissions by 50% by 2030.”

The 79-year-old is also a backer of the Earthshot Prize, whose inaugural winners were announced in November and included the City of Milan, the first major city to enforce a city-wide food waste policy, and Bahamas-based Coral Vita, which grows coral on land to replant in oceans.

The life of Michael Bloomberg has been a rich one in many senses. He grew up in the Boston suburb of Medford in a family of modest means, excelled at school and went on to graduate from Johns Hopkins and Harvard.

The Boston native’s fortune went from $55 billion in September 2020 to $70 billion at the same point this year, a jump of 27% in one year

In the late '60s Bloomberg moved to the Big Apple, eventually becoming a general partner at Salomon Brothers, a large Wall Street investment bank. When Salomon Brothers was taken over in 1981, Bloomberg left with a golden handshake of $10 million, money he used to construct his media and finance empire.

More recently, he was New York’s mayor from 2002 to 2013 and an unsuccessful 2020 Democratic primary candidate.

Fortune in full bloom
According to Forbes, The Boston native’s fortune went from $55 billion in September 2020 to $70 billion at the same point this year, a jump of 27% in one year. And while this figure is undoubtedly impressive, it pales when compared with Jeff Bezos and Elon Musk, whose wealth has been padded to the tune of $79 billion and $184 billion respectively over the same period. Yet while the other two have started investing more in the fight to protect the environment, Bloomberg was doing it long before it was de rigueur.

During his time as mayor of New York, he put in place a plan to reduce carbon emissions in the city by 30% by 2030, a target his successor, Bill de Blasio has committed to working towards. During his time in office, he instructed the city to begin the gargantuan task of renovating Manhattan’s skyscrapers to make them more energy efficient. The Bloomberg years also saw the planting of a million new trees and a toll levied on vehicles entering Manhattan.

The success of the environmental policies enacted during his time as mayor of the Big Apple has given New York’s richest man the impetus to dream bigger. Via Bloomberg Philanthropies, he supports worthy causes in the arts, education, public health and disaster relief, among others.

In December, the organization pledged $750 million to expand the network of charter schools in 20 US cities. Bloomberg believes these independent school, established by teachers, parents or community groups, offer a better prospect of educational advancement than public schools.

“The future of our country depends on bold changes to education,” Bloomberg has said. Looking to the future, and helping safeguard it, might be the Mike Bloomberg philosophy.