Come from nowhere and reach the top before your rivals even know what hit them. The French president's career-path bears a striking resemblance to that of a Silicon Valley CEO. 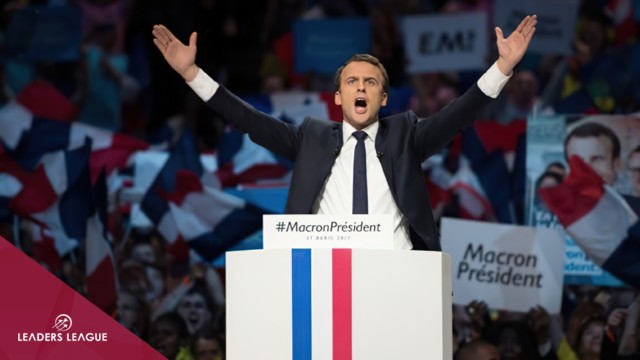 Like Zuckerberg and Co., he has had to negotiate his way through a tricky challenge: build respectability and at the same time retain the carefree attitude of his early days.
All the trains are full, I can't get to the west coast to celebrate Christmas with my family. Never mind, I'll change all that and launch a carpooling website, decided Frédéric Mazzella one snowy evening in December. Can’t find out who’s who at Harvard? I'll take matters into my own hands and launch a digital portfolio was Mark Zuckerberg’s approach. In many instances, the most disruptive ideas are born out of minor frustrations. This is true not only in relation to starting a business, but also in politics.

Macron’s Law
In 2015, Emmanuel Macron, then François Hollande's fresh-faced finance minister, championed the law that now bears his name. The goal was to boost growth, reduce unemployment and increase purchasing power. The novice came down to earth with a bang, because left-wing parliamentarians - mostly in agreement on the substance - were reluctant to vote for what they thought of as right-wing legislation. And as for those on the right, they were reluctant to vote for legislation that they approved of, but which was being pushed through by a socialist government – a typical French political impasse.

"Like all great disruptors, the investment banker who became president rose to the challenge at devastating speed"

At this point the thirty-year-old realized that the traditional left-right divide, more than just preventing reform, was an impediment to France’s success. It was time to kick the hornet’s nest. Under the Fifth Republic, no one had ever succeeded in doing so, but Emmanuel Macron “stuck his neck out”, to use an expression he is fond of. In April 2016, he officially launched En Marche, a movement that, on the scale of French political parties, seemed like a small startup too flash-in-the-pan to scare the well-established big parties. And yet, in just a few months, the Marcheurs swept aside everything in their path and radically transformed French politics.

Operation Blue Ocean
A blind-spot, a niche, a chink in the (Under) armour… in a way, Emmanuel Macron's conquest of would appear to have been inspired by Blue Ocean Strategy, published in 2005 by W. Chan Kim and Renée Mauborgne. This veritable start-up bible explains that the key to success lies in "finding new unexplored strategic spaces that the current market is unable to respond to".  That unexplored strategic space was ready made for the person who went on to succeed François Hollande. It contained both voters on the left and on the right. In other words, put simply, they were people open on societal issues but liberal on the economic front. A section of the population that does not identify with Benoît Hamon, champion of universal income and taxes on robots, or with the Fillon supporters, influenced by the conservative right-wing “Common Sense”  movement. Capitalizing on his opponents’ mistakes, exploiting his young and innovative side, Emmanuel Macron made fools of all the pollsters and laughed all the way to the Élysée Palace.

Start-up nation
Emmanuel Macron, CEO of France? The old adage – an insult to his detractors – has been repeated over and over again by the Marcheurs and their leader, who frequently makes allusions to entrepreneurship and disruption. The vocabulary Emmanuel Macron used during the campaign and at the beginning of his mandate mirrored that of Jeff Bezos, Elon Musk and Steve Jobs. The "lead climber" and "merit" are emphasized, "archaisms" are denounced, and "civic tech" is celebrated, as are "young people who dream of becoming billionaires". In meetings and during negotiations with the unions, "goodwill " is advocated. The CEO himself uses Franglais, adopts Messiah-like positions and dresses casually. Supporting LREM is a lifestyle choice. You become a Marcheur in the same way you might be a Tesla or an Apple enthusiast, seeking to "evangelize" as many people as possible. As with the Silicon Valley giants, democracy is important, but the major innovations and decisions come straight from the man at the top, who takes all the limelight. Tesla is Elon Musk, Amazon is Jeff Bezos, LREM is Emmanuel Macron. In short, the marketing strategy is ultra-personalized. Like all great disruptors, the investment banker who became president rose to the challenge at devastating speed.

"Supporting LREM is a lifestyle choice. You become a Marcheur in the same way you might be a Tesla or an Apple enthusiast, seeking to "evangelize" as many people as possible"

It's one thing to lead a country or take a market by storm with an extraordinary vision, but governing a multinational corporation or a country of 67 million citizens is quite another. The economy’s biggest disruptors manage to consolidate their status by mobilizing new skills and attracting executives who have worked in more traditional companies. In fact, you don't carry on growing by staying entrenched in your inner circle of loyalists. Something Emmanuel Macron understands perfectly. Although at the beginning of his mandate, he was surrounded by people the press nicknamed the Mormons (Stéphane Séjourné, Sibeth Ndiaye, Sylvain Fort, Ismaël Émelien etc.), he subsequently opened up to more experienced figures from the old French political world: Jean-Yves Le Drian, François Bayrou, Bruno Le Maire and more recently Roselyne Bachelot.


Come for the startup, stay for the gentrification
Then, like the GAFA, LREM had to respond to a major challenge: keep the carefree spirit of its early days in power, continue to innovate and at the same time prove its worth as a party fit to govern. There were, and still are, a lot of balls in the air.

Google is accused of undermining innovation, of behaving like a cynical giant, of wanting to dominate the world. Emmanuel Macron has been subject to exactly the same accusations. He who once brought in the fresh winds of progress, is now accused of deliberately weakening the left and the right wings of government in order to monopolize the anti-populist struggle. He who touted the "new French project", finds himself pilloried, sometimes by his early supporters even, for becoming a simple right-wing identity politician obsessed with fighting Islamic separatism.

2022 is an election year in France, and the President needs to carefully navigate the thorny issues of sovereignty and identity. And with the world in the midst of a healthcare and economic crisis, he is expected to look at the big picture. But he does not seem to have lost his desire to shake up politics. His plans to reform the civil service, ENA [France’s elite National School of Administration, which provides future senators and CEOs] and the voting system are proof. His vocabulary, which increasingly includes terms such as nation or homeland, nevertheless retains some of the characteristics of original Macronism, in particular when he criticizes the anti-5G movement for wanting to employ an "Amish model". Innovating and at the same being reassuring seems to be the key to success for Emmanuel Macron, who, nevertheless, has to keep an eye on what the competition is doing. From Xavier Bertrand to Anne Hidalgo through Arnaud Montebourg, they all dream of "doing a Macron", by leaving the traditional parties and clannish attitudes behind in order to win the throne in the Élysée. Although right now, victory by any one of these three contenders would seem highly unlikely, let's not forget that, thirteen months before the first round of the 2017 presidential election, Emmanuel Macron did not even have a party and did not appear in any poll.