Djamila Ribeiro is a leading philosopher, best-selling author, feminist, journalist and university professor renowned for her acclaimed works ‘Pequeno manual antirracista’, ‘Quem tem medo do feminismo negro?’ and ‘O que é Lugar de Fala?’, among others. In this interview, Ms. Ribeiro discusses the growing inequality in Brazilian society, the near complete absence of black women in positions of corporate leadership and evaluates the progress of diversity and inclusion in the Brazilian labor market, amongst other topics. 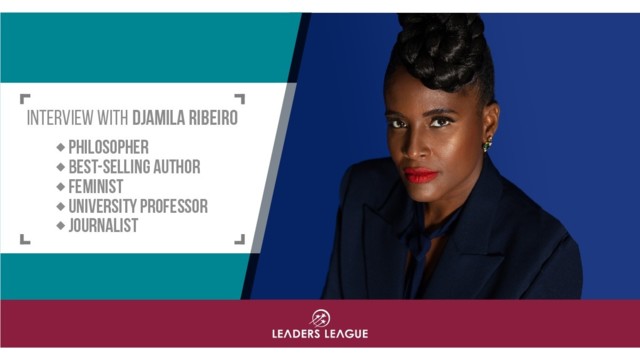 Leaders League. On one hand, Brazil is currently seeing a record-breaking wave of IPOs and a soaring M&A market, whilst on the other, it is registering alarming socioeconomic indicators, such as high inflation, over 19 million hungry Brazilians, and more than 14 million unemployed citizens. What is your socioeconomic analysis of this current scenario?

Djamila Ribeiro. Thank you for asking such an important question. I think that it is a historical scenario of a country marked by extreme inequalities. We must highlight the Brazilians who are benefiting from the record-breaking number of IPOs as well as the millions who are in the ranks of the unemployed, in informal jobs, or even employed, but have increasingly precarious labor conditions. Who are these Brazilians? Or rather, how many women fit into this picture? That is why we must be very careful not to fall into generalizations. Historically, in Brazil, the black population is the one which experiences terrible economic conditions.

As a rule, in the case of black women, they must also provide for their children. Cash transfer policies, such as Bolsa Familia, and public policies for the empowerment of these social groups, were particularly relevant in the first decade of this century, but what we have seen in recent years is the dismantling of social assistance, science, and technology, of affirmative-action policies in general, which ends up deepening the crisis and deteriorating the country's economic potential itself. In a country in which this inequality is as deep as in Brazil, and which has recently only widened, this gap finds a very powerful limit for its general economic pretensions, including those of the social group that is benefiting from such a heated market.

We must ask ourselves if we are experiencing a booming market or if we are far behind where we could be, if Brazil was a country with better income distribution. This poor distribution is characterized by markers of race and gender, which ends up impacting the country's entire human development index and affecting its national and international potential.

How can the private sector join efforts with public authorities and NGOs to reduce inequalities and promote economically and socially sustainable development?

Well, this depends on what sector we’re talking about. The private sector is a very broad term and there are endless possibilities to positively impact the reality of racially vulnerable groups. When I wrote ‘Lugar de Fala’ in 2017, I made sure to point out that the concept of place of speech is an ethical stance, represented by the following question: what can I, from my social position, do to impact the reality of these groups in a positive way? The answer to this must be honest and guided by professionals dedicated to the topic. Some indicators help us, for instance, in cash transfer policies. When public policies are directed towards women, its impact is felt across the entire family, and the entire community benefits from this. Of course, woman is not a universal category, as stated by Sueli Carneiro, when we refer to women, we must ask ourselves what kind of women we mean. Considering that black women are at the base of the social pyramid, seeing as she is a woman and black, a public policy which impacts this group will affect all other social groups. It is as Angela Davis says, when a black woman rises, society rises with her. Therefore, initiatives which promote mobility in this social group tend to have an extremely positive impact. It is essential to point out that the economic strengthening of these initiatives is fundamental for their sustainability.

We must ask ourselves if we are experiencing a booming market or if we are far behind where we could be, if Brazil was a country with better income distribution

Of the 500 largest companies in Brazil, only 4.7% are headed by black individuals and, if we account for gender inequality, only 0.4% of these companies are led by black women. What measures are necessary to reverse this situation?

Many companies have implemented target plans, diversity policies for positions of leadership and other measures that will have many effects over the coming years. In general, this issue involves a careful approach to hiring, retention, and promotion. Regarding hiring, which are the positions being offered and what are the requirements? In Brazil, fluent English is an obstacle for the vast majority of black people as racial inequality has, in general, only made it possible for white people to attend language schools, exchange programs, etc. As Beatriz do Nascimento, a great black Brazilian historian stated, racism is a tangle of subtleties. The issue of permanence involves several subtleties. Do you only promote those who have lunch with you every day? Many black people will not be able to afford it and will have lunch at work. There is the issue of commuting to work and the jokes of racist and sexist nature which are commonplace in a business environment. In other words, to reverse this situation, we need an anti-racist commitment. However, it is necessary to highlight that organizations led by black people exist which are focused on this type of recruitment and HR management and which focuses on these anti-racist practices: Pappo Consultoria, Empregue Afro, etc., besides many professionals specialized in this area.

Since 2020, diversity and inclusion policies have become more prominent in leading Brazilian companies, for example, with campaigns launched by Nubank and Magazine Luiza, among others. However, according to a McKinsey report, 73% of organizations in Brazil still lack a diverse workforce. What is your analysis of the current moment of D&I in the Brazilian labor market? Can we talk about real progress?

We can undoubtedly talk about real progress. Of course, we are still far behind where we should be, therefore, this is not a resolved issue, not by a long shot. Actually, corporate diversity enhances the company’s own operations, as we are taught by Sueli Carneiro, Reinaldo Bulgarelli, Cida Bento, who laid the foundations of this debate and advanced it a great deal; and, in a younger generation, Sarah Coly, Bruna Marcondes, with whom I have been speaking, besides other academics who study the subject.

It is widely known that companies lacking a diverse workforce hinder their own performances, but this may be something that companies refusing to implement diversity policies in their business will only realize in the medium and long term. When I was in Norway, on invitation from the Norwegian government, they briefed me on their diversity policies in the labor market which are considered among the most advanced in the world. Domestic companies in Norway must have at least 40% gender diversity on the board of directors. The intriguing thing is that the man behind this policy was a leading member of the conservative party, who personally told me that if it weren't for this mandatory requirement, they would only hire the people with whom they play golf with on Sundays.

This provocation struck me, as the politician stated that the social group's comfortable position in only hiring those similar to themselves reduces creativity and potential, affecting the country's entire economic chain, which loses competitiveness. But I believe many companies are aware of this and acting in favor of diversity and inclusion among their staff, either due to this economic argument or to the humanitarian, anti-discriminatory reason, in the sense that these colonial practices of exclusion of black people from specific workplaces harm human dignity and citizenship, which affects the whole country. I speak weekly in meetings and business conferences where this concern is immense and regularly provide counsel. These are companies which are adapting to modern times and which are already reaping the positive impact of this shift towards diversity and inclusion. In this sense, we can talk about real progress.

In Brazil, fluent English is an obstacle for the vast majority of black people, as racial inequality has, in general, only made it possible for white people to attend language schools and exchange programs

Under your coordination, the Feminismos Plurais collection has published important books to debate racism and its different forms in an accessible and uncomplicated language. How do you currently evaluate the willingness of society and the corporate world to debate racial equality? And what are the main obstacles to racial diversity in the current market?

It is an independent work I coordinate since 2017, and the collection reached its 11th title in October. The idea is to address issues that permeate the racial debate from a critical, didactic, and accessible perspective. Partnerships with companies have been fundamental to this initiative since the beginning. Thanks to partner companies, we have organized events and distributed books to individuals who could not afford them. Moreover, we also donate books from the collection to public libraries, schools, reading groups and more. It’s almost a public policy to encourage reading and to advance the racial debate in our country. Currently, I coordinate the Plural Feminisms Platform (Plataforma Feminismos Plurais). It is an audiovisual initiative with online courses, live classes, research group mentoring, and consulting. We recently launched the Racial Literacy (Letramento Racial) program to help members of the public to get started in the debate. Through partnerships with companies and engaged funders, the platform has become the country's greatest anti-racist and feminist education streaming platform, reaching thousands of NGOs serving economically vulnerable groups. Maintaining independent projects, especially in the education sector, is a major challenge in Brazil. However, I feel that the corporate world is becoming increasingly open to possibilities. Despite everything currently happening in Brazil, I feel the market is one step ahead regarding diversity and inclusion. And this movement should only grow. I’m optimistic.