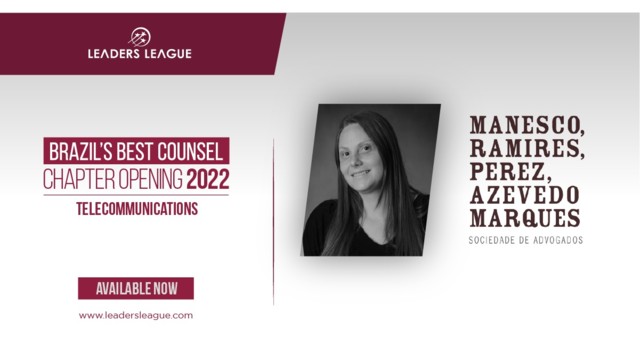 The Prospects and Opportunities of the Brazilian Telecommunications Sector Until 2025

The next years in the Brazilian telecommunications sector will be a period of important changes that will break with the past and that will present opportunities to the market in a context of matching sectorial demands with the regulation, aiming at overcoming outdated dogmas.

Immediately, the termination of the Service Concession of Fixed Switched Telephone Service Agreements - STFC will generate a unique movement in the market, with its replacement by third parties that will have the opportunity to provide public services in a focused manner and with third-party resources, inaugurating a new sectorial model.

At the same time, the outgoing concessionaires will move the telecommunications sector either via the adaptation of their grants to the private provision scheme, in exchange for investments in network state-of-the-art infrastructure and technology, or for the advent of the final term of the grant. In both cases, the calculation of credits and debits between concessionaires and the Federal Government will be unavoidable, as well as the confrontation of the identification, valuation and indemnification of the assets whose possession will be reverted to the federal Government or to the new concessionaire.

Despite the strict control of the Federal Court of Accounts – TCU in this matter, with possible new interventions, National Telecommunications Agency – ANATEL is the technical and competent regulatory body that will be in charge of the remodeling process for STFC grants in the country.

The auction of radio frequencies suitable for 5G technology may bring, in the coming years, a new strength to the market of Mobile Personal Service – SMP

In parallel, the companies operating the telecommunications network infrastructure will be consolidated, which, in the near future, should move the market, offering the possibility of composition of routes and the reach of coverage to telecommunications service providers with lower costs and, in the end, allowing these agents to focus their efforts on improving the core of their activities.

The movement to create Open access fiber in the country has already started and, although the large operators have reorganized themselves to explore infrastructure, many other companies (including from outside the sector) have moved to enter this market and contribute to the permeability of networks local.

It is important for investors to be clear that in a continental country, small access providers are responsible for a large and extremely important participation in the implementation and lighting of local networks, which ANATEL is attentive and interested in promoting.

This scenario will also be driven by the consolidation of the secondary radio frequency market, which has been recently regulated and which, without any doubt, will be enjoyed with the establishment of strategic partnerships not only among the large groups of telecommunications services providers, but also with small providers and with the new entrants. The coordinated and optimal exploitation of radio frequencies, which is a limited and scarce resource, should be the focus in the coming years.

There is no doubt that the secondary radio frequency market will provide the offer of new solutions for users of telecommunications services and improve the quality of those already received, and at the same time, will drive the search and celebration of partnerships between operators that will seek to compose their networks through the sharing of radio frequencies with important investment savings.

The auction of radio frequencies suitable for 5G technology may bring, in the coming years, a new strength to the market of Mobile Personal Service - SMP, enabling the entry of new players, especially regional ones, who may start or expand their activities, consolidating the very important role they play in a country with continental dimensions and more than 5.000 municipalities.

Despite the probable absorption of one of the major players of the Brazilian market by the other three dominant groups,  it appears to be  a very important opportunity for new entrants and small providers,  the two possible constraints to be imposed by ANATEL to this operation: the obligation for major players  to offer national roaming (including local ones), for all  purposes (including M2M and lot), with prices and conditions suitable for the size of these competitors; as well as to offer MVNO partnerships, also for all  purposes, with free negotiation and pricing. There is no doubt that such conditions can be the driver for the entry and growth of new or small and medium players in the Brazilian telecommunications market.

Perhaps this is the opportunity for the MVNO to grow and consolidate in the country, as it happened in the international market, since in Brazil the virtual mobile telecommunications model did not develop as expected, showing itself to be residual. There is no doubt that this market still has a lot to grow in the country, with the necessary regulatory adjustments already on the radar of ANATEL being awaited.

Finally, add to this, the very close perspective that ANATEL will grant numbering to Multimedia Communication Service providers – SCM, thus enabling the expansion of their performance and business model, as it already occurs in practically all over the world. It is not clear why for more than 20 years ANATEL has been reluctant to grant numbering to SCM providers, but with this important perspective on regulatory change, several international players have shown interest in becoming a SCM provider in Brazil, revealing yet another important sectorial movement.

It will also be of paramount importance the definition of the maintenance or not of legislative and regulatory asymmetry in the treatment of Conditional Access Service providers – SeAC in relation to OTTs, as well as the regulation of content services, regardless of their means of access. Certainly, such definitions will be able to promote the broad and rapid development of this niche in the national market and provide users with a new range of services and utilities. The business opportunities in this niche are many and the entire market is on standby for the remodeling and expansion of its business.

All these opportunities will take place in a scenario in which the purpose, as perspectives, is the revision of regulatory taxes with the adjustment of the tax burden and the simplification of sectorial regulations aiming at an efficient control of ANATEL, especially the FUST, FUNTTEL and FISTEL rates that effectively burden operators and, in a chain, users of telecommunications services in the country, which is known to have one of the highest tax burdens on telecommunications in the world.

It is worth remembering that the Federal Government has already publicly indicated that the telecommunications sector is a priority, including the expansion of the population's access to broadband Internet.

Milene Louise Renée Coscione is a lawyer who has been working with the fields of telecommunications and technology for 19 years. She is head of the firm’s TMT practice. She holds a Bachelor of Laws from PUC-SP and a Master’s in State Law from Largo São Francisco (USP). Among her professional highlights, Ms. Coscione has worked in the transfer of control operations between telecommunications service providers, mergers and acquisitions, radio frequency tenders, extensive litigation before ANATEL, modeling projects for incoming operators and the legalization and regularization of sectorial business models. She additionally provides consultancy and legal opinions on the most diverse topics related to telecommunications services.