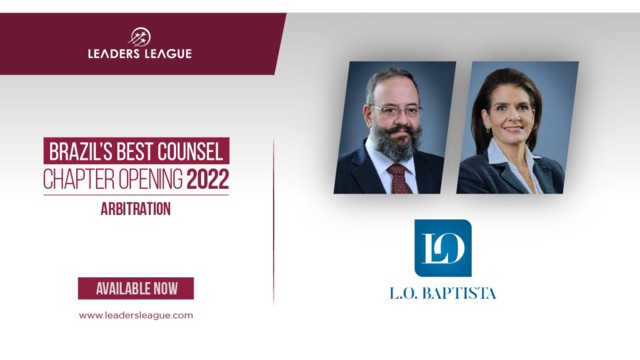 Arbitration is ever-changing and is constantly adapting to meet the needs of its users. The COVID-19 pandemic became the ultimate test to evaluate how quickly law professionals would adapt to the new virtual reality, and arbitration was, of course, no exception.

After social distancing rules were announced, Brazilian arbitral institutions had to set new internal rules within days to ensure that one of arbitration’s biggest virtues – speed, compared to judicial proceedings – was maintained despite lackluster conditions.

Given that those who opt for this type of proceeding value not only its speed but its lower susceptibility to being influenced by outside factors when dealing with a private institution, changes are expected to be made at a faster pace.

In the meantime, however, arbitration continued to expand and grow in Brazil. According to the most recent International Chamber of Commerce (ICC) Dispute Resolution Court Report, Brazil remained the most selected country of arbitration within Latin America and the Caribbean and was ranked fifth globally. Of the total number of parties, Brazil was the most represented nationality within the Americas. Moreover, the 2021 White & Case International Arbitration Survey listed São Paulo as one of the most preferred seats for arbitration in the world, coming top of its region (Caribbean/Latin America)1.

As of 2021, arbitration is now an official method of dispute resolution under the Brazilian New Bidding Law

Due to such growth, a few new trends emerged.  This chapter seeks to explore recent developments arbitration has made to adapt itself to remote working conditions as well as new demands brought forth by practitioners.

1. Technology and the COVID-19 pandemic

Using technology, the Brazilian arbitral community was quickly able to adapt to remote working conditions. Arbitral institutions took the first steps to guarantee that the pandemic would not stunt proceedings.

Brazilian chambers had a leading role in guaranteeing that their users and the cases under their administration were kept safe throughout difficult times. On-site filings of hard copies are no longer required, and now the documents of the proceedings can easily be uploaded and downloaded by the parties and arbitrators.

Now, most of the hearings are being held online, and will likely tend to continue this way – something that before the pandemic was considered almost impossible. Costs were reduced and time was saved. These difficult times have shown how procedures can be optimized and speeded using technology.

Now, with a post-pandemic world on the horizon, discussions have arisen regarding the changes that will stay even after social distancing norms are no longer in use.

2. Arbitration and the public sector

As of 2021, arbitration is now an official method of dispute resolution under the Brazilian New Bidding Law. Federal Law no. 14.133/2021, which regulates public contracts and bidding proceedings, now contemplates the possibility of both direct and indirect Public Administration being able to arbitrate – a subject that was not covered by the old bidding law, Federal Law no. 8.666/1993.

The New Bidding Law foresees the use of not only arbitration as a form of dispute resolution but also mediation and conciliation, which brings forth the hope for growth in the use of ADR involving the public sector.

On another note, the discussion about tax arbitration has once again arisen.  In May 2021, the state of Mato Grosso approved a Bill that installs tax arbitration in the State.  On a national level, there are currently two bills in discussion – Bill nº 4.527/2019 and Bill nº 4.468/2020 – that are awaiting approval.

Therefore, for the not-so-distant future, tax arbitration is expected to be fully regulated and installed in Brazil.

Confidentiality is often seen as one of the advantage of arbitration when compared to judicial litigation.

However, Brazilian stock market rules establish that publicly traded companies are obliged to reveal any information that would affect investors’ decisions to buy or sell shares of a company. The law determines the duty of disclosure, creating a conflict with the confidentiality of arbitrations.

In this scenario, the Brazilian Securities and Exchange Commission (CVM) recently started working towards the regulation of the level of disclosure to be made by companies, to fulfill the duty of transparency.

The CVM proposal provides for revelation of disputes capable of affecting, directly or indirectly, the rights of the shareholders of the companies involved in litigation. The CVM suggests the following information be disclosed: the parties involved in the dispute; the amount, assets or rights involved; the background of the dispute; and the relief requested by the parties. These measures would give shareholders more information about the companies they invest into, and also guarantee their access to equal information, ensuring no privilege whatsoever.

Also, disclosure of information is currently being discussed in judicial cases in which arbitration proceedings are, for some reason, under review by the judiciary branch.

Recently, the São Paulo Court of Justice has analyzed the issue of confidentiality in arbitration. The position of the Court has been that it should not be applied automatically unless there is enough proof to justify the secrecy.

However, this position is not yet held by a majority in the judiciary, and the issue is expected to be in the spotlight until further notice.

4. Arbitration in construction and energy sectors

Despite the pandemic scenario, arbitration is still at the forefront when it comes to the resolution of disputes regarding the construction and energy sectors in Brazil. The suspension of constructions, delays in the chain of suppliers and contractual breaches have raised several issues in infrastructure contracts.

Also, the economic crisis originating from the pandemic increased the number of litigations regarding the energy sector, especially those involving ‘take or pay’ clauses and the resolution due to the renegotiation of obligation clauses.

All of these disputes have increased the number of arbitration proceedings within those sectors in Brazil over the last few months.

Despite the pandemic seemingly stopping the world, arbitration has been able to maintain its relevance in Brazil, with the country continuing to be the most represented in Latin America, as noted by the ICC.

Moving forward, the true impact of the measures adopted by the arbitration players to mitigate the consequences of the pandemic will be revealed. Some of them will no longer be necessary, whereas others might become a permanent change; this seems to be the case for virtual hearings and electronic filing, for example.

Also, for the coming months, a more definitive position regarding the use of arbitration in tax disputes is expected, especially though the approval of bills on the matter. Finally, the greater debate concerning disclosure and public traded companies proposed by the CVM is yet to continue.

Silvia has extensive experience in the judicial and administrative litigation area, involving civil, commercial and consumer relations, with definition of procedural strategies, preparation of documents and monitoring of disputes in all instances of the Judiciary and solid experience conducting judicial hearings, meetings before Public Administration bodies, State and Federal Public Ministry. Silvia also acts and has acted in several arbitration procedures, national and international, both as an arbitrator and as a lawyer, in the corporate area, M&A, construction, business contracts, real estate, and franchises, among others.

Tonico has experience in arbitration and judicial litigation, with a special focus on issues related to construction law, insurance and commercial or corporate disputes. He has successfully represented Brazilian clients in arbitration proceedings in the United States, the United Kingdom, Singapore and Japan.