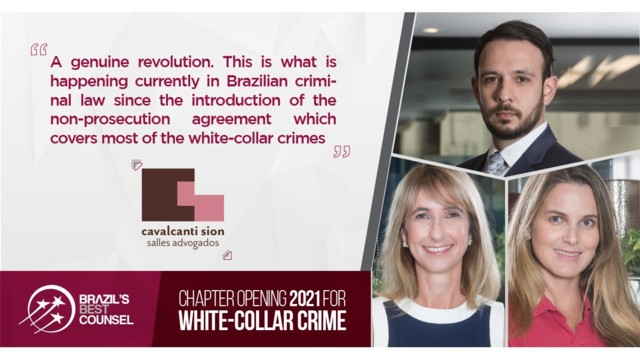 Until January 2020, the possibility of avoiding criminal litigation cases was subject to the reduced scope set forth by the Federal Law 9.099/95, namely for crimes whose maximum sentence does not exceed two years of imprisonment.

The introduction of Article 28 A into the Brazilian Criminal Procedure Code by the so-called “Anti-Crime Package” is a significant landmark in the expansion of consensual justice in Brazil. Article 28 A highly increases the possibility of reaching an agreement by means of a Non-Persecution Agreement (NPA), which may be applied to mid-severity crimes with a minimum sentence of up to four years of imprisonment, provided that such crimes have not been committed with violence or severe threat.

It was not before time. Although our judicial branches have been advancing in the digital era, many proceedings are still physical dockets, thus contributing to the tardiness and inefficiency of our justice system. In addition, our culture is of extreme litigation and our courts lack the necessary structure to handle 2.4 million new criminal proceedings filed in the year 2019 alone (according to data from the National Counsel of Justice).

High levels of urban violence, an outdated anti-drug policy, new types of criminal offense described in countless sparse laws and an intricate appeal framework are some of the factors that lead our overloaded Judicial Branch to try to satisfy the demand of millions of long ongoing processes, which are quite often transformed into innocuous persecutions barred by the Statute of Limitations.

In an extremely punitive country, the adoption of more efficient and streamlined criminal policies, pursuing ideals of a more restorative justice – more inclined to redress the damage caused by the offense rather than the physical punishment of the offender – is essential to the progress of the criminal justice framework.

The outlines of the new institute are particularly adequate for financial crime, anti-money laundering, competition crime and similar, which represent a complete revolution in the resolution of criminal conflicts of a business nature.

Since, in most cases, there is no physical harm in the so-called ‘white-collar crime’, it makes more sense, in terms of criminal policy and the retributive nature of the punishment itself, to have the imposition of pecuniary punishments and constrictive equity measures as opposed to punishments of physical nature, whose function is to unnecessarily contribute to massive imprisonment.

Non-Persecution Agreements emerge as a true instrument of negotiation, after a real fever of plea bargain agreements in the last few years, many of which were challengeable and conducted in disagreement with the institute’s principles and values. It is worth noting that the Brazilian Supreme Court has been advancing in the analysis of legal boundaries applicable to such agreements. Some of the members of our Public Prosecutor’s Office who have participated in the famous “Car Wash Operation” are currently responding to disciplinary proceedings by virtue of the abuses committed in conducting certain proceedings.

On the other hand, the NPA is a lot less controversial and is mostly based on objective criteria, taking into consideration the minimum penalty for the offense and the fact that it has not been committed with violence or severe threat.

The essential requirements to reach an agreement are damage compensation by the offender and waiving eventual assets resulting from the crime. There is also the possibility of immediate enforcement of alternative penalties, such as the restriction of rights and community service. Fines may also be applied, cumulatively or alternatively.

Finally, expanding the range of possibilities to negotiate agreements, the law allows the Public Prosecutor’s Office to propose any other condition on a pro rata basis and compatible with the nature of the offense. This enables the criminal response to be tailor-made and in line with the type of offense perpetrated, thus carrying a pedagogical potential.

In order to be entitled to an agreement, the accused must be willing to admit his/her error, with no need to involve third parties, as it happens in plea bargaining.

Once the conditions agreed upon are fulfilled, the possibility of punishment is extinguished. Please note that under no circumstances may the institute be seen as a mild or unpunishment measure as it cannot be applied to repeat offenders or to those who have already benefited therefrom in the five prior years.

Just as in any change in law, it takes time for the courts to establish how to interpret the new procedure.

From the beginning, one of the concerns of the attorneys is that the Public Prosecutor’s Office may intentionally overcharge in order to deny the agreement to the accused by adding up the hypothetical crimes committed. In these cases, experienced attorneys will certainly appeal to eliminate any excesses, making the agreement feasible.

Another reason for concern is the wording of the Law when it provides that the accusation “may” propose an agreement “provided that it is necessary and sufficient to reprove and prevent the crime”. It grants prosecutors a discretionary authority that may generate disparities in the application of the institute. However, it will not be acceptable to invoke abstract severity of a crime so as to deny an agreement to the accused, since the level of culpability of each criminal offense was already taken into account by legislators when establishing the punishment.

Finally, another issue that is being discussed is whether the institute would be applicable even in cases where the accused has not previously confessed and, to this, it seems to us that it would. All the more so because the burden to plead guilty and produce evidence against oneself, renouncing the right to remain silent, can only be required under an agreement.

In our opinion, the new institute constitutes an important and inevitable advance in Brazilian Criminal Procedure Law and it shall be carefully handled by attorneys who handle cases involving white-collar crimes. In theory, the new agreement applies to countless business criminal types, such as, fraudulent and reckless management, prevented loans, electoral campaign funds, active and passive corruption, embezzlement and smuggling.

It is crucial to retain a law firm with long experience in negotiation as a successful agreement commences with the first contact by the attorney with the member of the Public Prosecutor’s Office. Once the first barrier of the applicability of the institute to an actual case is lifted, it is essential to know how to intelligently discuss the most appropriate criminal response and defend the rights of the client, securing a discrete negotiation so as to avoid negative exposure of the client’s name in the media.

Throughout these first months of effectiveness of the new law, our firm has negotiated significant and successful agreements, already confirmed by the courts. We are very enthusiastic about the new institute and we believe that the new law is a true revolution in our criminal proceedings, with potential to untie the Judiciary system, providing room for it to analyze more complex cases.

Dora Cavalcanti is a leading criminal lawyer in Brazil. For the past 25 years she has been a highly sought-after attorney for complex litigation cases. Her experience covers not only white-collar and money laundering cases, but also corruption scandals, murder trials and every other section of the criminal spectrum. Among her clients are some of the most important construction companies, investment banks and businesses in the country.

Paula Sion has been practicing criminal law since 1999, representing several corporations in a myriad of criminal matters, such as corporate and bankruptcy crime, money laundering, private investigations, among others. She handles cases meticulously and is a combative lawyer with great strategic ability, always seeking the best solution for her clients. With this pragmatic vision, she has recently participated in the negotiation of the largest plea bargain agreement ever held in Brazil.

Bruno Salles acquired extensive experience in corporate criminal law, working in leading law firms specializing in criminal law in Brazil. Combining practical experience with academic knowledge, he stands out for his role in cases of money laundering and corruption, financial crimes, environmental crimes, tax crimes, among others. He has recently proved to be a skillful negotiator representing clients in collaboration and leniency agreements, in Brazil and abroad.