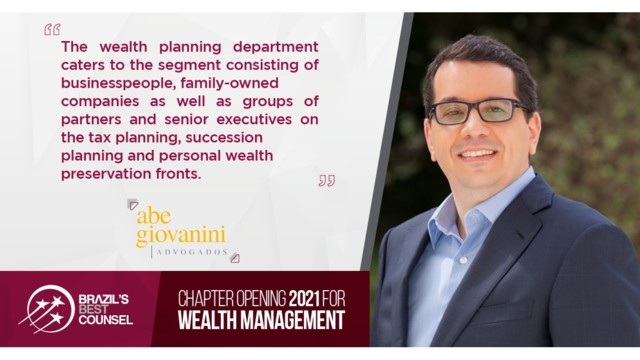 The current year of 2020 has been marked by the pandemic of COVID-19. All over the world, governments of every level have been forced to combat a serious new disease and mitigate its economic consequences. As a result, public expenditures have drastically increased, and various bills of law introducing new taxes or raising rates of current taxes were proposed and discussed in the legislative bodies.

In Brazil, where the general tax burden on the economy had already been continuously rising since the enactment of the present Federal Constitution in 1988, the necessity to increase public expenditure has been dramatic. Several bills of law were proposed in the National Congress introducing new taxes with impact on private wealth, particularly (i) the compulsory loan, foreseen in the Federal Constitution exactly for the hypothesis of public calamity; and (ii) the tax on great fortunes, also foreseen in the Federal Constitution but not yet made a reality. These bills of law, however, appeared to be a political response to public opinion and until now do not seem to have a real chance to be approved as new legislation.

A more advanced discussion in National Congress involves the bill of law proposing to reduce the taxation on corporate profits and creating a taxation on dividends instead. Additionally, the end of tax deferral at closed-end investment funds, an increase in the taxation of real estate holding companies and the taxation of controlled foreign companies held by Brazilian tax residents abroad are under scrutiny and may still come into force. As a matter of fact, the new taxation and its impact on private wealth is yet to be known.

Apart from the enactment of new taxation, we have noticed that certain high-net-worth individuals (HNWIs) and ultra-high-net-worth individuals (UHNWIs) have seen the pandemic and ensuing economic crisis as a proper moment to work on their succession planning as the preparation of Brazilian wills, foreign wills, “vital wills” (guidelines for healthcare) and proxies with a lasting mandate (for people of confidence to take such care) has clearly increased. Professionals in the public health sector who were directly involved in combating the pandemic have also sought orientation on their succession. The National Council of Justice (CNJ) has permitted the execution of powers of attorney, wills, extrajudicial probates and other notarial acts by electronic means, in order to avoid any physical presence and contamination by the new coronavirus.

We have noticed that many businesspeople whose companies were to some extent affected by the pandemic rapidly sought protection of their personal property, such as homestead, private pension plans and private investment companies abroad. Some were on time to be entitled to such protection without having to fear the threat of fraud against creditors, fraud against judicial lawsuits or fraud to bankruptcy; some were not.

We have also noticed an increase in demand for wealth planning in general by multi-jurisdictional families, mainly Brazilian individuals living in the US, Portugal, Switzerland, the UK, Italy, Spain and Japan. The combination of a potential rise in taxation in most of these jurisdictions and an increase in interest for succession planning has driven many multi-jurisdictional families to look for proper orientation to assure the efficiency and compliance of their private wealth planning.

Many of the current generation of under-45 sons and daughters of wealthy Brazilian families have graduated in the US and now work and live there, often having US citizens as wives and husbands. As their parents’ generation approaches the age of 70, they have been working on their succession planning so as to entitle the new generation to receive Brazilian companies, real estate properties and financial investments as US taxpayers, most of which involves setting up US and offshore trusts. Once the Trump administration’s 2017 Tax Cuts and Jobs Act has raised the threshold of the federal estate tax up to $11.58 million per individual (donor or deceased), among other reductions, to transfer wealth to the next generation of US citizens. Since Democratic candidate Joe Biden just won the 2020 presidential election, and has promised a rise in taxes, many wealth planning projects are now developing on a more accelerated basis.

Nonetheless, as a former Portuguese colony and a country that has received much immigration from European countries over the last century, Brazil has still close relationships with these countries, which continue to be destinations sought by wealthy Brazilian families and individuals. In that sense, many Brazilian UHNWIs and HNWIs have taken advantage of the golden visa and the resident non-domiciled regime that Portugal approved by law after the 2008 global financial crisis. Some of them go to Portugal to pursue their careers or to start up their own business and have a better quality of life; others go to Portugal to enjoy retirement. In any case, they seek not only immigration and tax advice, but also succession planning counsel, in view of the cross-border issues that arise out of immigration.

Switzerland and the UK are already well known for their resident non-domiciled individual tax regimes which encourage the immigration of wealthy, educated and talented younger individuals. Spain and Italy have also approved by law visas and favorable individual tax regimes and have been welcoming some Brazilian under-45s, as well as older people seeking retirement.

As a law firm with a Japan desk, we have also seen a movement of a Brazilian individuals currently in their 40s or 50s who moved to Japan back in the 1980s or ’90 and now seek investment opportunities in Brazil, mainly in real estate and the financial markets, as the return on investment may seem to be higher in Brazil than in Japan. Therefore, we have also been dealing with several Brazil-Japan cross-border tax and other legal issues regarding such international investments. On the other side, we have also been assisting many Japanese expatriates who currently work for Japanese companies in Brazil and need to remain compliant with the rules in both countries.

Last but not least, we have seen an increase in the number of multinational marriages in general, basically composed of couples formed by Brazilian citizens and citizens of some of the aforementioned countries, as we have been sought by them to provide orientation on matters such as conflict of law and enforcement of marital rights.

Apart from the COVID-19 pandemic that has marked 2020, we see that much wealth planning work in the coming years will involve matters relating to (i) an increase in the Brazilian tax burden, and (ii) cross-border issues from tax, family and succession and asset protection standpoints.

Having founded Giovanini Filho Advogados back in 2004, Renato Giovanini Filho went on to set up Abe Giovanini Advogados in 2019, with over 20 years of experience practicing wealth planning law and related litigation. He advises entrepreneurs, senior executives, family groups and high-net-worth individuals on matters involving tax planning, succession planning, and M&A involving family businesses and innovative companies. Renato is also a member of the entrepreneurship and fund regulation committee of ABVCAP (the Brazilian Private Equity and Venture Capital Association), and of STEP (the Society of Trust and Estate Practitioners). He speaks English and Spanish as well as Portuguese.