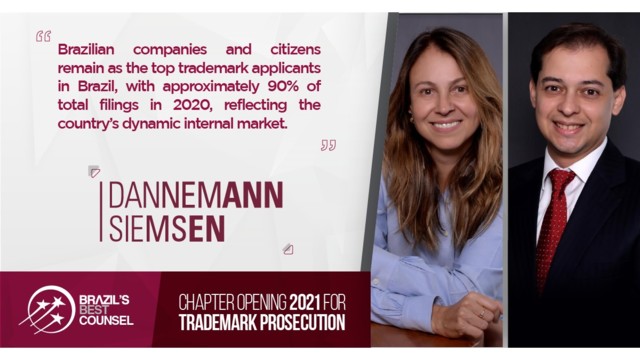 With Brazil’s accession to the Protocol Relating to the Madrid Agreement Concerning the International Registration of Marks, also known as the Madrid Protocol, in 2019, trademark prosecution in Brazil took a significant turn.

As the first year has passed, we may now analyze the first impressions on the adoption of the Madrid Protocol by both local and foreign companies.

Such figures, in a year deeply marked by the uncertainties brought by the Covid-19 pandemic, confirm how dynamic and important the Brazilian market is for companies worldwide. The continued recovery of the Brazilian economy is also reflected by the increasing number of trademark filings in the country, which had already reached nearly 200 thousand new filings by October 2020, with an increase of more than 5% despite the present circumstances.

Furthermore, the administrative changes adopted by the Brazilian Patent and Trademark Office (BPTO) in the last few years continue to show results, with national trademark filings being ruled on in an average of six to eight months.

Such a timeframe, however, has not yet been reflected in the applications reaching Brazil via the Madrid Protocol. These are still taking at least 12 months to be reviewed, in the absence of oppositions, which certainly creates a disadvantage for those companies opting for such a route.

In spite of such important and very welcome administrative changes, the BPTO still faces some challenges in adapting its IT systems to the new features available with the Madrid Protocol. While co-ownership was finally implemented in mid-September 2020 for national filings, the division of applications and registrations as well as multi-class applications are not expected until at least mid-2021.

Notwithstanding the new scenario for foreign applicants, Brazilian companies and citizens remain as the top trademark applicants in Brazil, accounting for approximately 90% of the total filings in 2020, reflecting the country’s dynamic internal market.

Under such a scenario, it is paramount to bear in mind that Brazil is traditionally a first-to-file country and proprietorship over a trademark originates from a granted registration. Therefore, seeking a trademark registration as soon as possible is of utmost importance to enforce trademark rights and to guarantee legal protection in the country. Despite such recent improvements, companies and private practitioners alike hope that the BPTO’s investments and efforts to achieve global standards of productivity will continue, allowing companies to secure their intellectual property rights in Brazil. This will certainly help to build solid foundations for the increase of local and foreign investments and for the strengthening of the business environment in the country, which becomes vital in a moment in which the Brazilian economy retakes its path to sustainable growth, in spite of all the unprecedented challenges which surfaced in 2020.

Elisabeth Siemsen Do Amaral is a partner and member of the board of directors of Dannemann Siemsen and Dannemann Siemsen Latin America. With over 35 years of experience in intellectual property law, she specializes in trademarks and is head of the firm’s national and the international trademark practices. Ms. Siemsen Do Amaral is currently President of the Inter-American Intellectual Property Association (ASIPI), a member of the board of directors of the Brazilian Intellectual Property Association (ABPI) as well as member of other key associations such as AIPPI, ECTA, INTA and ABAPI.