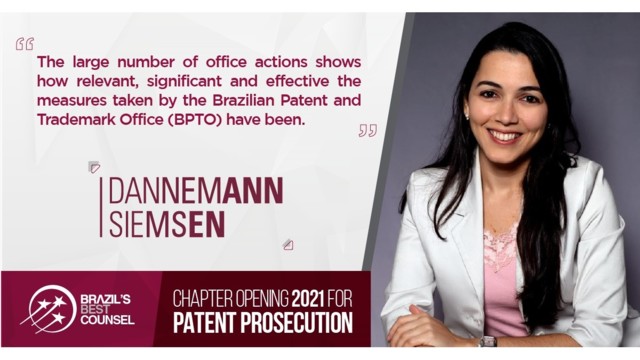 On the year in which the Brazilian Patent and Trademark Office (BPTO) celebrates its 50th anniversary, there is much more to celebrate than this remarkable date.

Throughout the last 10 years, the BPTO has performed a huge technological and digital update in order to expand and improve the availability of data, information and knowledge on the industrial property sphere. Such updates came through the complete digitization of patent applications, the provision of an electronic filing system by means of which each and every service is performed electronically, all the written opinions were electronically made available on the BPTO’s system, and the availability of IT systems which can be easily navigated by the users. These enhancements truly brought the BPTO into the digital era and allowed for an increase in the examiners’ productivity.

Another important successful measure taken by the BPTO is the ‘Plan to Combat the Patent Backlog’. This plan started on August 1st, 2019 and was directed at the patent applications filed before 2017, having arisen following several discussions between Directors and Heads of Examination Departments, as well as contact with the users, including through the Brazilian Intellectual Property Association (ABPI) and Brazilian Association of Industrial Property Agents (ABAPI). The new president of the BPTO used these inputs to put together a bold plan to reduce the patent backlog.

The plan aims to reduce the backlog by 80% by June 2021 and to have decisions issued for 80% of the patent applications with an effective filing date prior to 2017 and which were pending when the plan was implemented. This successful strategy consisted of issuing preliminary office actions in which the prior art searches carried out in other jurisdictions are used and the applicant is invited to adapt the Brazilian claims to those allowed in other jurisdictions such as Europe and the US and to submit technical comments in favor of the patentability of the invention.  Such procedures managed to expedite the decisions since the BPTO takes into consideration the examination results of other jurisdictions. So far, the BPTO has already issued around 100,000 office actions and several favorable decisions. The large number of office actions shows how relevant, significant and effective the measures taken by the BPTO have been.

Apart from the above, the BPTO has implemented complementary measures that have shown to be very effective to expedite the examination of at least certain more important patent cases.

The BPTO has also implemented initiatives to reduce the patent backlog by signing several bilateral Patent Prosecution Highway (PPH) agreements with many countries such as Japan, Europe, United States, Denmark, United Kingdom, Dominican Republic, China, Austria, Sweden, South Korea, Singapore and Latin American countries (Argentina, Chile, Colombia, El Salvador, Nicaragua, Panama, Paraguay, Peru, Uruguay) allowing the applications not included in the time frame of the preliminary office action program or even those that cannot wait until the issuance of such office action to benefit from an expedited procedure. In the very beginning of the PPH program, it was only available to certain areas of technology. In view of the expansion of the program to all areas of technology, the number of applications which used the PPH program in 2020 exceeded the total number of requests filed in 2019 by November 5, 2020.

Furthermore, the BPTO issued rules for requesting fast-track examinations of patent applications in specific situations, namely: 1) possibility of infringement; 2) interest by third parties; 3) coverage of therapies for HIV, cancer, neglected tropical diseases or rare diseases (afflicting 65 individuals per group of 100.000); 4) coverage of green technologies; 5) claim of Brazilian priority; 6) small and medium companies as applicants; 7) public science and technology institutions as applicants; 8) startups as applicants; 9) coverage of technology related to Covid-19; 10) applications filed by senior individuals, or with physical or mental disability or serious illness; and 11) applications covering technology resulting from public financing or technology available in the Brazilian market.

These procedures allow all applicants and technology areas to benefit from the expedited examination procedures.

Even though Brazilian legislation does not provide any adjustments of the patent term, as there is in the US and Japan (Patent Term Extension - PTE), neither for exclusive marketing rights as there is in Europe (Supplementary Protection Certificate - SPC), many mechanisms have been implemented by the BPTO so that any delay in prosecution does not jeopardize patent terms and any enforcement of rights. Concerning the term of protection for inventions, the sole paragraph of art. 40 of our current IP Law states that the term of a Brazilian patent is either 20 years from filing or 10 years from grant, whichever expires later. Such provisions provide applicants with a minimum patent term.

An additional proof of the BPTO’s engagement is that, despite the fact that the Brazilian IP Law neither establishes, regulates nor prohibits oral proceedings, the possibility of scheduling meetings with the BPTO has always been possible for the applicants. However, during the pandemic, all face-to-face meetings were suspended due to lockdown, and the BPTO made available in November, 2020, an electronic tool on the BPTO’s Integrated Service Platform which allows users to apply for teleconferences with the Board of Examiners thus providing an additional measure to integrate and serve users with transparency and agility.

Monique Rodrigues Teixeira is a partner at Dannemann Siemsen. Ms. Rodrigues Teixeira joined the firm in early 2008 and is a licensed pharmacist with postgraduate degrees in Industrial Pharmacy and Intellectual Property Law. She works in the patents area, catering to clients from the most varied sectors of industry such as the pharmaceutical, personal hygiene, cosmetics, food, biotechnology, chemical, petrochemical and agricultural areas, which includes providing technical support in patent lawsuits. Ms. Rodrigues Teixeira is also a patent specialist trained by the Japanese Patent Office (JPO) and Asia-Pacific Industrial Property Center (APIC).