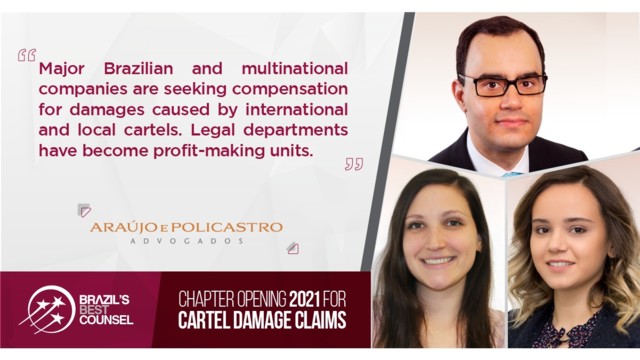 Brazil has experienced an increase in the number of recovery actions for cartel damages in recent years due to several important developments in the field of private antitrust litigation.

Recent court rulings have further clarified relevant issues regarding (i) the moment that the statute of limitations period of individual recovery actions starts to run; (ii) the effect of a finding of infringement by the Administrative Council for Economic Defense (CADE, the Brazilian antitrust authority); and (iii) the disclosure of information and access to files related to CADE’s investigations.

In addition, a proposal to amend the Brazilian Antitrust Law (Law No. 12,529/11), which aims to provide more incentives for aggrieved parties to seek compensation for damages arising from antitrust infringements, is under final review at the House of Representatives after being approved by the Senate. The proposal includes establishing double damages and alternate dispute resolution in certain cases. Moreover, further approaches to fostering private antitrust litigation are gaining traction, such as third-party financing.

The first follow-on action for cartel damages was filed in 2006, after the Brazilian antitrust authority fined participants of a cartel in the long-steel market. This case was a turning point for private antitrust litigation, inspiring other victims and class associations to seek damages against other cartels, such as the industrial gases cartels and cement cartels, among others. The enactment of the current Antitrust Law in 2011 was also a milestone for private antitrust enforcement since the new law has played an important role in promoting cartel detection through an effective leniency program and, consequently, enhanced anti-cartel enforcement.

Antitrust enforcement in Brazil, however, was primarily focused on public enforcement conducted by CADE. Indeed, CADE employed all of its efforts and resources in developing cartel prosecution tools ─ including its now renowned settlement program ─ and using its strong working relationship with other antitrust authorities around the world. Private enforcement, however, which acts as  an effective deterrent by providing due compensation to victims, has been overlooked. Several initiatives have more recently, therefore, emerged in order to remedy such imbalances between public and private enforcement.

Initiatives from the federal government (and CADE itself), congress and the private sector have significantly contributed to promoting private antitrust enforcement. The House of Representatives Bill of Law No. 11,275, for instance, which is one step away from being approved and entering into force, addresses some of the perceived hurdles for enhanced private enforcement and creates further incentives for bringing cartel damage claims. The bill proposes the creation of a double damages system, wavering from this multiplier, however, with infringers which have executed leniency agreements or consent decrees with CADE. Furthermore, in order to to execute a consent decree with CADE, it establishes a mandatory provision stating that the settling party will agree to submit damages claims to arbitration if the aggrieved party requests and/or agrees to initiate an arbitration proceeding to adjudicate damages claims. Such obligation, however, does not apply to the party that first executed a leniency agreement with CADE.

Applying the STJ’s abovementioned understanding, the Court of Appeals of the State of São Paulo has recently issued a decision in Cimento Itambé vs. Mendes Junior Engenharia S.A. (2019), ruling that CADE’s final decision on the merits triggers the statute of the limitation period for follow-on claiming damages. Indeed, it is only after CADE’s  infringement decision that the aggrieved party may be considered aware of the infringement, the extent of its consequences, and therefore, its right to seek compensation.

When it comes to the effect of CADE’s decisions, follow-on claimants may rely on CADE’s findings to demonstrate antitrust infringement, since Brazilian courts have reaffirmed that CADE’s ruling represents unequivocal evidence of its existence, see for instance Association of Hospitals of Minas Gerais v. Air Products Brasil Ltda (2012).

Last year, Brazil’s Supreme Court issued an important ruling reinforcing the relevance of an infringement decision from CADE. In Comal Combustíveis Automotivos v. CADE (2019), the STF decided that courts of law shall defer to CADE’s findings of fact considering the agency’s expertise and resources to find whether an investigated conduct produced anticompetitive effects on the Brazilian market. However, this ruling applies only to findings on the merits, and therefore, courts of law may still review questions related to due process of law and issues of procedural nature concerning CADE’s proceedings.

Also, the STJ has ordered CADE to disclose documents and information obtained during its investigations to support a follow-on damages action. According to this decision issued in Electrolux do Brasil SA v Whirlpool SA (2016), such documents are not allowed to remain perpetually sealed given their relevance to the public, considering the constitutional principles of transparency that must guide the public administration.

This ruling led CADE to issue Normative Resolution No. 21 of 2018 regulating the disclosure and access to evidence from its investigations’ files following an intense debate regarding the balance between public and private enforcement. According to this Regulation, part of the documents gathered in the course of administrative proceedings are disclosed after CADE issues a final decision, except for pieces of evidence provided by beneficiaries of leniency agreements and consent decrees (e.g., history of unlawful conduct), documents concerning trade secrets and confidential and unrelated business information, which also remain sealed.

Furthermore, third-party litigation funding in Brazil has been swiftly developing. The Brazilian Civil Code allows aggrieved parties to assign to a third party the right to claim compensation when the nature of the obligation, the law, and/or an agreement with the debtor does not oppose such assignment. Given the complexity of private antitrust claims and, therefore, the considerable amount of time it can take a court to issue a decision, litigation funding may provide an alternative solution for financing both collective and individual claims.

In conclusion, key recent developments have advanced cartel damage claims and are expected to continue having positive repercussions on the private antitrust litigation field.

Bruno L. Peixoto leads a state-of-the-art practice focused on representing claimants in antitrust litigation before Brazilian courts and coordinating global strategies for recovering antitrust damages in international cases. Bruno has drafted and implemented cutting-edge antitrust litigation strategies in Brazil and abroad. He was previously an attorney at the Ministry of Justice and earned his LL.M. from the University of Chicago.

Ludmilla M. Silva is an associate and member of the Antitrust & Competition team. She focuses her practice on private enforcement of antitrust law. Ludmilla graduated from the Universidade de São Paulo, and concluded graduate studies in economic law at Fundação Getúlio Vargas with honors. She was recently admitted to the Master of Science of Law (J.S.M./SPILS) program at Stanford University.

Carolina Trevizo is an associate at Araújo e Policastro Advogados and focuses on competition law and litigation, particularly private enforcement of antitrust law. Carolina graduated from University of São Paulo in 2019 and is in the process of completing her double degree (License en Droit), granted by the University Jean Moulin Lyon.