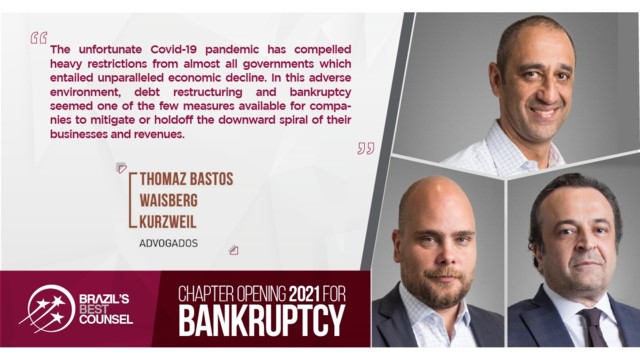 2020 has sent numerous shockwaves throughout the world and, not surprisingly, the debt restructuring and bankruptcy scene in Brazil has also been significantly impacted.

The unfortunate Covid-19 pandemic has resulted in major restrictions being implemented by almost all governments which has resulted in unparalleled economic decline. In this adverse environment, debt restructuring and bankruptcy appears to be one of the few measures available for companies to mitigate or hold off the downward spiral of their businesses and revenues, with a significant increase in companies filing insolvency proceedings, both domestically and abroad.

The ongoing economic crisis’ impact on Brazilian insolvency legislation has been twofold: first, it has laid bare the shortcomings of the current Law no. 11,101/2005, promoting urgent responses especially from the judiciary, which has done an admirable job in fine-tuning and adapting key features of insolvency legislation; secondly, it has increased the appeal for legislative bodies to partially reform the current law.

With regards to the judiciary, the National Justice Council (Conselho Nacional de Justiça) implemented a number of initiatives and recognized the difficulties faced both by the members of the judiciary as well as companies, also attempting to provide a uniform response to key issues. Numerous Court of Appeals and lower court judges have also worked tirelessly to adapt procedures, allowing for virtual hearings and creditor meetings.

With regards to the legislative response, several bills and proposals with emergency measures have been the subject of debate and discussions, with few, however, being effectively passed. On this note, most recently the proposed Bill no. 6.229/2005 was passed in the House and is now awaiting approval or amendments in the Senate.

The Bill no. 6.229/2005 does not limit itself to emergency adjustments resulting from the Covid-19 upheaval, but rather has matured for some time. Key features include corrections in view of prevalent judicial precedents, additional responsibilities for the Judicial Administrator, the new possibility for creditors to present a plan in a judicial restructuring under certain circumstances, a revamping of the rules regarding debtor in possession – DIP financing, in addition to alterations to specific bankruptcy issues.

A further issue that Bill no. 6.229/2005 addresses resides in international insolvency proceedings, both initiated abroad or in Brazil. This matter, not mentioned in the current Law no. 11,101/2005, has come to the attention of the debt restructuring and bankruptcy market in view of recent Chapter 11 filing in the USA by relevant Brazilian companies, which has created its own set of difficulties, especially with regards to the effects of a restructuring plan approved by creditors abroad, in Brazil, and its respective recognition procedures.

These and other challenges are some of the few that 2020 has presented thus far for the debt restructuring and bankruptcy market in Brazil.

With a Bachelor of Laws from Mackenzie University, Joel Luís Thomaz Bastos has vast experience acquired in the most complex restructurings, in and out-of-court reorganizations and bankruptcy cases advising debtors, creditors and investors. Mr. Thomaz Bastos is also visiting professor at several universities.

Ivo Waisberg holds a  Bachelor, Master’s, Doctorate and Full Professor degrees in Law from PUC-SP as well as a Master’s in Trade Regulation from New York University. Mr. Waisberg also serves as a Professor in Commercial Law at PUC-SP. He focuses his practice on debt and judicial restructurings, bankruptcies, mergers and acquisitions and corporate litigation.

Bruno Kurzweil de Oliveira has  built his experience in the most complex restructuring cases advising debtors, creditors and investors on restructurings, in and out-of-court corporate reorganizations and complex bankruptcies. Mr. Kurzweil holds a Bachelor of Laws from PUC-SP and an LL.M. in Bankruptcy Law from Columbia Law School.