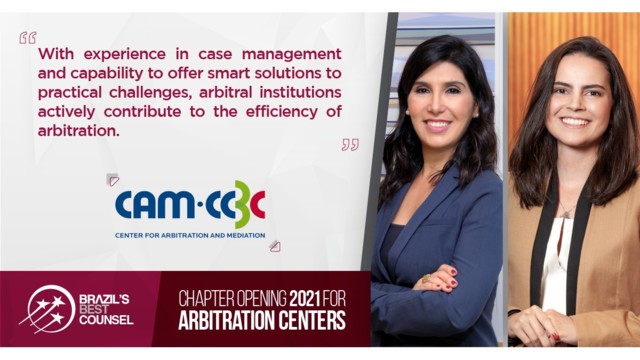 As an alternative to national courts, arbitration has become widely adopted to resolve business-related disputes across the globe. The recipe for success can be attributed to several aspects that constitutes the arbitral system.

The neutral itself is a key factor. The arbitrator is generally appointed by the parties to a dispute, considering a certain area of expertise. Either a sole arbitrator or an arbitral tribunal will decide on the case and the decision shall be final and binding upon the parties.

Arbitration is a creature of party-autonomy and as such, parties to an agreement are free to choose the rules of the game. Arbitral proceedings can be designed to suit particularities of a wide range of commercial and investment disputes, especially those involving international elements.

When choosing arbitration, parties may also rely on arbitral institutions to provide administrative support in accordance with certain arbitration rules.

Arbitral institutions’ primary role is to offer an ancillary service to the arbitral justice and their degree of interference in proceedings may vary according to the chosen arbitration rules. With experience in case management and capability to offer smart solutions to practical challenges, arbitral institutions actively contribute to the efficiency of arbitration.

Nonetheless, the arbitral system could not be fully sustained without the Judiciary’s cooperation. National courts are extremely relevant when, for example, deciding on a provisional measure before the constitution of the arbitral tribunal, assisting the arbitrator to compel a witness to testify, or recognizing and enforcing foreign arbitral awards.

In view of its characteristics, arbitration is a well-suited method to resolve complex commercial disputes, being fully embraced by several jurisdictions.

In Brazil, the use of arbitration has grown exponentially since the beginning of the 21st century. While the Brazilian Arbitration Act (“Act”) came into force in 1996, inspired by the UNCITRAL Model Law, the endorsement of arbitration by Brazilian businesspeople has flourished after 2001, when the Brazilian Supreme Court declared the constitutionality of the Act.

Eventually, arbitration gained even more strength in the country when Brazil ratified, in 2002, the New York Convention on the Recognition and Enforcement of Foreign Arbitral Awards. With a good arbitration law and in line with international standards, the Brazilian arbitration market has evolved in a fast and dynamic pace.

In 2015, the Act was updated to include some important provisions encompassing the most advanced doctrine and case law, such as the rule that expressly authorizes the Brazilian Public Administration to arbitrate and the arbitrator’s power to revoke, modify or grant urgent and provisional measures.

The Brazilian Judiciary has also contributed to the development of arbitration by restricting its interference within the limits of the law and by consistently providing technical and constructive case law, especially the Superior Court of Justice and the São Paulo state courts. This is one of the reasons why São Paulo is considered a safe seat for arbitration.

The Center for Arbitration and Mediation of the Chamber of Commerce Brazil-Canada (“CAM-CCBC”) has closely followed the evolution of the Brazilian arbitration scenario and has actively collaborated to its exponential growth.

Among Brazilian institutions, CAM-CCBC is a pioneer and a leader, having set the standard for world-class secretariat services and being able to meet the ever-growing demand that the Brazilian arbitration market has experienced.

With over 40 years of experience, CAM-CCBC has become an international reference. According to the Queen Mary University and White & Case International Arbitration Survey 2018, CAM-CCBC was considered the eighth top of mind institution globally and the third in Latin America.

As of August 2020, 1.146 arbitral proceedings were registered with CAM-CCBC amounting to over US$ 16 billion in dispute (1USD=5.36BRL). Over the last decade, the Center has experienced a consistent growth in new cases with an average of 100 new arbitrations per year.

As per CAM-CCBC’s 2019 Annual Report, the average length of proceedings is of 13.2 months and the most common agreement types submitted to arbitration in that year were share purchase agreements and other corporate-related agreements (51%) and sales of goods and services agreements (15%).

In addition, the Center is well-structured to administer all kinds of disputes involving a wide spectrum of business sectors, from complex infrastructure projects to professional consulting.

In 2019 alone, there were 41 ongoing cases involving Brazilian state entities, reflecting the ever-increasing tendency of arbitration with the Public Administration since the reform of the Act. Moreover, CAM-CCBC registered disputes involving parties from all over the world, such as Japan, France, India, Portugal, United States, among others.

CAM-CCBC’s numbers reflect the experience built over the years in developing best practices for case management. The Center offers a unique formula of administration certified to ISO 9001:2015 (internationally recognized quality standard for service providers), guaranteeing   the continuous improvement of efficiency to its services.

The Secretariat of the Center is comprised of eight case management teams, a Coordination Team and the Secretary General, all certified lawyers with practical and academic experience in ADRs, who will provide administrative support to every step of the proceedings. The Center’s board is highly qualified and experienced in conducting reliably the first stages of the proceedings, especially with the aim of guaranteeing the flawless constitution of arbitral tribunals.

2020 was an atypical year to say the least. The Covid-19 outbreak has torn across the globe, announcing unprecedent consequences. Businesses had to be prepared to face the unknown. By the time the crises hit Brazil, CAM-CCBC had to adopt immediate measures aiming at mitigating possible damages to the parties, lawyers, and arbitrators while preserving the health and security of all involved.

To guarantee the continuity of its services, the Center has advanced ongoing tech projects enabling the electronic conduction of proceedings, from online filing to remote arbitration hearings, considering cybersecurity and confidentiality concerns.

Today1, the Center administers 312 cases 100% online, having organized over 50 remote hearings and meetings, attesting to the success of the measures taken to overturn the challenges of the pandemic.

CAM-CCBC’s activities transcend the act of providing cutting-edge administration services. The Center is strongly committed to promoting arbitration and other ADRs, by constantly contributing to the development of best practices and encouraging the study in the field.

The most prominent institutional activity organized by the Center is the annual Arbitration Congress, which is now in its 7th edition. The Congress is an ever-growing event and has become a must attend conference for practitioners, kicking off the São Paulo Arbitration Week (SPAW), a collaborative initiative assembled by CAM-CCBC.

Aware of its unique position in the Brazilian market and its responsibility in setting the benchmark of an efficient dispute resolution administration, CAM-CCBC is prepared to tackle future challenges, developing further its activities in line with transparency, diversity and ethics.

Eleonora Coelho is President of CAM-CCBC. Ms. Coelho obtained her law degree from the University of São Paulo (USP) and obtained her master’s degree in Civil law, Arbitration and Alternative Dispute Resolution Methods from the Paris II – Panthéon-Assas University. She acts as arbitrator and attorney in several national and international arbitration proceedings. Ms. Coelho is member of the body of arbitrators of many Arbitration and Mediation Chambers in Brazil. She was also part of the commission of attorneys responsible for the reform of the Arbitration Act which originated Law 13.129/15 and has published several articles on arbitration, as well as ministered classes and lectures regarding the subject.

With considerable experience in ADRs, Lenora Faria is Institutional Development Advisor of CAM-CCBC. Ms. Faria acted as case manager and Deputy Secretary General of Brazilian arbitral institutions. Lenora graduated from the law school of the Pontifical Catholic University of Rio de Janeiro (PUC-Rio) in 2008, where she obtained a postgraduate degree in civil procedure in 2011. In 2013, Lenora concluded a master’s degree in international dispute settlement at the University of Geneva/Graduate Institute of International and Development Studies, LL.M. program in international dispute settlement (MIDS).