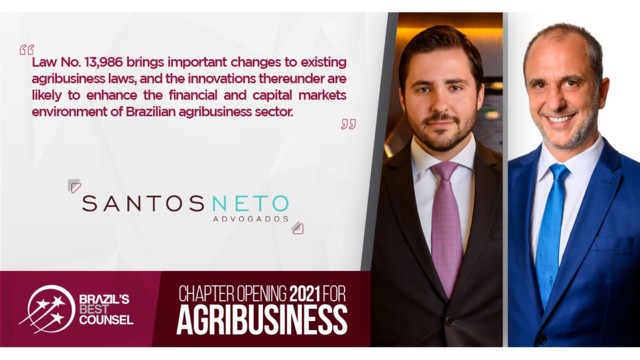 Santos Neto Advogados is proud of having participated actively in the group formed by the Ministry of Agriculture, suggesting wording for such law.

Law No. 13,986 brings important innovations and changes to existing laws, but some aspects related to the granting of certain guarantees for obligations assumed by rural producers, which had been poorly discussed so far, deserve special attention among the innovations thereunder, insofar as they represent the real benchmarks for this new and expected rule. Several matters contained in such law are likely to enhance the financial and capital markets environment of Brazilian agribusiness sector, as follows:

(a) Fiduciary lien over real estate property. Fiduciary lien (which is a security interest with bankruptcy-remote nature) over rural property in favor of a foreigner or company controlled by foreigners is now finally (and expressly) permitted.

As is widely known, given Brazil’s strong agricultural sector, some of the more valuable properties in the country are rural land. Under Brazilian law, foreign ownership of rural land encounters several restrictions. However, Law No. 13,986 makes clear now that foreigners are entitled to receive fiduciary liens on such properties; and, as a result of foreclosure of such fiduciary liens (and even mortgages) or payment in kind, they can also obtain ownership of rural lands.

Taking into account the restrictions on foreign ownership of rural lands, there was legal doubt about the availability of fiduciary liens where rural lands were involved. There are court rulings that affirmed the right of foreign entities to obtain fiduciary liens on rural lands. For example, in January 2019, an appeals court in the State of Goiás overturned a lower court decision that had held that fiduciary liens on rural lands could not be granted to foreigners. Now, thanks to Law No. 13,986, the legal doubts that led to the Goiás litigation have been eliminated. As a result, Law No. 13,986 facilitates greater foreign investment in Brazil in these challenging economic times as a result of the COVID-19 crisis by permitting the grant of security interests in rural lands using the more easily enforceable instrument of the fiduciary lien.

(c) Fiduciary lien over products. Rural Product Notes (Cédula de Produto Rural or “CPR”) can now be secured by fiduciary lien over agricultural products and their by-products, present or future, fungible or non-fungible, consumable or not.

This innovation is indeed important since there was a discussion with respect to the possibility of granting security interest of agricultural products to a creditor other than Brazilian financial institutions or in the frame of a capital market transaction. With this innovation, it is now clear that any holder of a CPR may have the benefit of a fiduciary lien over agricultural product.

This is also more relevant nowadays due to the current possibility of rural producers filing for judicial recovery proceedings (“RJ”). With a bankruptcy-remote nature security interest, such as fiduciary lien, the holder in principle would not be impaired by the effects of an RJ.

(d) Essentiality of assets. The essentiality of movable or real estate property given in fiduciary lien must be expressly declared by the issuer of CPR.

Although the principle of a bankruptcy with a security interest like fiduciary lien is that the creditor is not impaired by the RJ, if the underlying asset of such security interest is a (so declared) essential asset, then enforcement thereof may be hindered during the stay period of the RJ. Now, with the changes to law regarding CPRs, as implemented by Law No. 13,986, if such asset given in fiduciary lien to the beneficiary of a CPR is essential for the issuer thereof, there must be a specific representation in such regard by the issuer thereof in the CPR. On the other hand, if there is no such representation in the CPR, there will be an assumption that the asset given in fiduciary lien is not essential for the issuer.

(e) Extraconcursality of the Certificate of Agricultural Deposit and Agricultural Warrant (CDA/WA). In line with the case law that was already being consolidated, the product represented by CDA/WA, when endorsed, can henceforth be neither confused with the assets owned by the depositor nor subject to the effects of the depositor's RJ or liquidation.

The aforementioned changes were welcomed by the key market players, as it seems to facilitate the thriving of agribusiness due to reinforcement of the collateral structures provided by the producers, with much more clarity, legal certainty, and purported efficiency.

The outcome and the positive feedback received from market players encouraged the government to dive further into the initiative of creating a more robust environment for private investments in the sector. In particular, the Ministry of Agriculture, which started a second round of new discussions with the market, intends to (a) adjust and enhance the innovations of Law No. 13,986, such as, among others, the rules on affected rural patrimony (patrimônio rual em afetação), which is a kind of trust over rural properties, yet to be explored further due to the lack of clarity of current wording; and (b) prepare a bill of law to create a new debt instrument, the agribusiness credit bond (cédula de crédito do agronegócio – CCA). We see the CCA as a revolutionary debt instrument, which may be used in several different aspects of agribusiness, and which may even replace CPRs. CCAs may also be used as underlying assets for agribusiness securitizations (CRAs), replacing the debentures in corporate CRAs, for example.

Santos Neto Advogados has an active role in the creation of the CCA, contributing to the Ministry of Agriculture’s suggestions based on our experience in agribusiness as a renowned law firm, with a view to the drafting of such a bill of law, which we hope will pass in a short time. We now await the upcoming legislative innovations in the Brazilian agribusiness sector throughout 2021.

Gabriel Buscarini Leutewiler is a partner at Santos Neto Advogados, and co-head of the agribusiness, project finance, trade finance, capital markets, OTC and derivatives, corporate finance and banking departments. Gabriel has vast experience in assisting foreign and local investors with structuring and implementing debt transactions in Brazil, as well as advising local players on structuring securitization transactions involving all kinds of assets.