Several polls published in the US on Sunday put Joe Biden in the lead in a number of key swing-states. But polls on the eve of the US election have been wrong before. Just ask Hillary Clinton.

As the former First Lady or Al Gore can attest, winning the popular vote is not always synonymous with winning the White House. The key is to emerge victorious in enough swing states to get over the 270 electoral college vote mark.

Donald Trump and his Democratic Party rival have long since stopped campaigning in states destined to go blue (New York or California for example) or red (Kansas or Wyoming). In the final hours before the election, it’s all about winning hearts and minds in the battleground states.

And here, the Sunday papers made for depressing reading for President Trump (see infographic below), with Joe Biden ahead in the majority of them, including Arizona, where the latino vote could well prove crucial, but also in predominantly white states, such as Pennsylvania and Wisconsin, both of which were carried by Trump in 2016.

Few on the Democratic side are counting their chickens however, as a number of possibilities still exist, including a late surge in voting by Republicans in swing states, which could yet tip the balance in Trump’s favor. 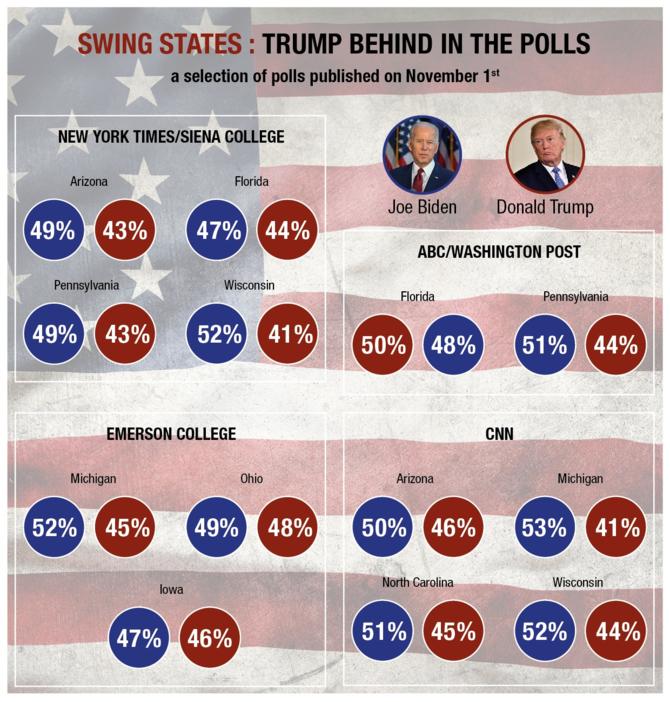 Summary US Presidential Debate: Welcome to the Idiocracy Amy Coney Barrett: A history in seven decisions US presidential election: Money talks If Trump wins, Europe must go it alone What to expect from US foreign policy under a Biden presidency Trump or Biden? Mixed feelings among European politicians… Trump hangs tough as 2020 election promises nail-biting finish Biden or Trump? How the result of the US vote will impact the UK Trump's policy agenda? More of the same

2CFinance supports companies and investment funds via its CFO and transaction services activities. Since it was founded...

At a time when the having freelance status as a worker grows ever more attractive, companies and freelancers alike are l...

“Every deal is different”

Reboul & Associés celebrated 15 years in existence in 2020. The partners of the boutique firm, each of whom has spen...

“When expanding internationally, it’s essential you take cultural differences in...

“We have created a veritable organic-produce ecosystem”

Twelve years ago Jérémie and Frédéric Ginart took over control of Relais Vert, a company their father Jean-Louis had set...

Excellency in Fiduciary: the full-spectrum of Luxembourg-based Fidefield