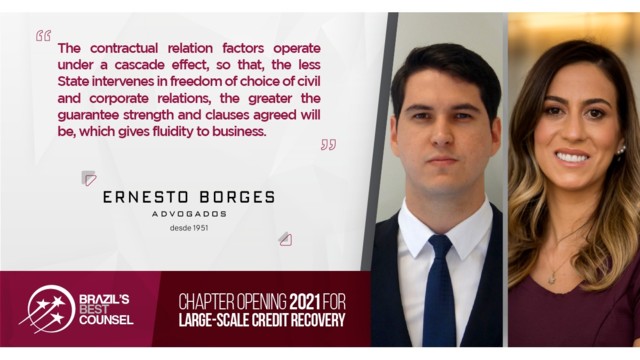 The contractual freedom of choice and limits of Brazilian cultural interventionism

The instrumentation of contracts in actions of civil execution and credit recovery, despite all the specificities and characteristics appropriate for each transaction, are increasingly adding new modalities and alternatives in terms of tools for settling the out of court title, aiming at guaranteeing a greater robustness to the contractual relation and strengthening the freedom of choice of the parties, guaranteeing, therefore, more stability for private law relations.

Theoretically, guarantees and contractual causes are an almost perfect marriage for a healthy business relationship, serving as a two-way street for contracting parties to enjoy more legal certainty in transactions. However, in practice, some measures of guaranteed relativization and contractual flexibilization, which are culturally practiced, both by plaintiffs operating the law and the Legislative and Judiciary Branches, are very harmful to such scenario.

Understanding the importance of social function in contractual relations is the bridge to understanding the actual market dynamics, a subject ratified in the words of Roberto Senise Lisboa: “The contract, whose role in social development is very important, also acts as a mutual instrument of cooperation between parties, which, although they have different interests, are aiming at achieving the promotion of the social growth1.”

Thus, it is possible to realize that the panoramic view of the country’s financial market is a foundation that shall walk hand in hand with all other legal bases that might affect the economics: since the origin, like the time of creation and application of rules, which shall always be achieved through a deep study about the regulating impact of each law, and subsequently the timeline to formalize contracts, already applying the best market practices and the transparency required for serving as an instrument for the prevention of disputes and, finally, even in the daily decisions in judicial processes.

Therefore, the legal measures exercised without complying to such factors, in addition to affecting an important part of economics, related to the large extension of the private equity relations, make the judicial decisions extremely slow, creating a impassable barrier for the actual purpose of the lawsuits: seeking mutual agreements.

It is obvious that, both the Legislative and Judicial branches shall always act aiming at preventing excesses and illegalities in general contracts, regardless of their nature. However, the contracting parties have a limitation that shall be reviewed and respected in the name of freedom of choice for formalizing their business, a law based on the principle of “pacta sunt servanda” and which is well represented by the Economic Freedom Act No. 13.874 as of 2019, which is responsible for regulating and protecting the free initiative of economic activities, in addition to protecting the interest of the parties, decreasing the State’s participation as an intermediating agent.

Therefore, one may conclude that the purpose of the Economic Freedom Act is precisely facilitating business between people with a common interest, aiming at decreasing bureaucracies and, accordingly, developing a stimulation to the Brazilian financial market with less State intervention, a subject of extreme relevance and often not debated.

Furthermore, note that the reason to create such specific legislation has a major historical root cause, in which specialists highlighted, via studies directed by the Index of Economic Freedom from the Heritage Foundation, that the process for applying liberalist economy and its resulting free market extent, has an umbilical relation with the significative increase of speed for creating wealth, innovation, and entrepreneurship, resulting in direct benefits to the population’s standard of living and a strong improvement in the country’s human development index2.

Notwithstanding, the crucial point, which must be urgently discussed in the Brazilian scenario, is that contractual relationship factors operate under a cascade effect, so that, the less State intervenes in freedom of choice of civil and corporate relations, the greater the guarantee strength and clauses agreed will be, which gives fluidity to business, assists the prosecution of the case, decreases the number of repeated demands, and, finally, facilitates the negotiation process before prosecution, and when such factors are summed up, they force both the institute of mediation and promote putting capital in economics, bringing the relations to a new level, based on solid guidelines driven by the safety of business relations in a first moment and, in a second moment, by the legal certainty.

For work to be done to prevent an imbalance between the financial and legal markets, which, despite everybody knows is not always fulfilled, is jointing efforts on behalf economic freedom policies, stimulating the dialog between the parties, strictly applying the terms agreed between the contracting parties aligned to fair, clear, and less subjective decisions, aiming at unifying understandings on the subject, finishing, therefore, the wide polarization of decisions currently taken in the country.

In the current economic scenario, retracted by the pandemic effects, the market expectations took different and undefined paths, especially for the fact that the amplitude of economic damages was not delimited yet. Thus, the new overview requires bringing back and encouraging the debate about such situation since now, working focused on  readaptation of interpersonal relations, in order to strength business connections and free initiative, an essential tool for retaking economics at this moment of many uncertainties.

Summarily, the result of such change of behavior will have a large repercussion in several sectors of society, which will increase the number of settlements and new business, and, at the same time, it will decrease the general number of lawsuits, in addition to creating effects since the base of credits release, with more working capital in the financial market and less interest rates, straightening, therefore, all chain and settlement of the Brazilian economics.

2) An outstanding study on the subject is the Heritage Foundation’s index, showing that the economic freedom level is connected to creation of wealth, entrepreneurship, innovation, and population standard of living. https://www.heritage.org/index/book/chapter-2

Paulo Renato Martins De Oliveira is a partner of Ernesto Borges Advogados, coordinator of the Retail Credit Recovery portfolio, including strategic and high-value mandates. Mr. Martins de Oliveira is a member of the Special Banking Law Commission (CDIRB) of OAB/MS. He graduated from Universidade Católica Dom Bosco (UCDB) and has a postgraduate degree in Business Law from the Brazilian School of Law (EBRADI) in partnership with the Bar Association of Brazil, São Paulo Branch and Higher School of Law.